Winner of the prestigious Venice Film Festival’s Golden Lion Award for Best Picture, the clever film shares many similarities with the absurdist play, Waiting For Godot. Some will find it a hilarious and delightful, unlike any other movie. The jokes and philosophical deconstruction of two literary characters will fly right over the heads of others.

In the original Hamlet, Rosencrantz and Guildenstern were minor characters as childhood friends of Hamlet, summoned by the king to distract Hamlet from his apparent madness. Written and directed by Tom Stoppard, the playwright made his directorial debut with Rosencrantz and Guildenstern Are Dead. He had first written the popular play years before, so his direction shows a sure hand. Rosencrantz (Gary Oldman) and Guildenstern (Tim Roth) here take the lead roles in their own lives as they ponder their fate within the artificial reality of Hamlet. We see Hamlet and other characters from the play going through the well-known plot by Shakespeare in the background. Using witty puns and wordplay more common to the stage than film, the two friends come to terms with their own existence over the course of the movie.

Part comic, part surreal, the movie is more cinematic but less manic than the original stage play. That loss probably hurts the film’s overall impact on the screen to some degree. Richard Dreyfus is the other significant presence as the Player, a mysterious stage actor that crosses paths with Rosencrantz and Guildenstern several times.

A foreknowledge of Hamlet is almost a requirement to fully enjoy the delightful in-jokes made at the Bard’s expense.

Turning Hamlet on its head, Stoppard’s clever screenplay constantly relies on the flowing banter between Rosencrantz and Guildenstern. Its roots on the stage are quite evident, though Roth and Oldman both turn in superlative performances delivering Stoppard’s precise wordplay. Both had done Shakespeare on the stage before and their carefree performances translate well without coming off as stiff.

While the film is a remarkable absurdist achievement, its entertainment value is greatly devalued for those unfamiliar with Shakespeare’s original play. Its scope and meaning go far beyond Hamlet as it asks questions about fate and predetermined destiny, but the characters of Hamlet are always there in the background pushing poor Rosencrantz and Guildenstern around. A foreknowledge of Hamlet is almost a requirement to fully enjoy the delightful in-jokes made at the Bard’s expense. The story gets too clever at times and the movie begins to drag in its second half, as Stoppard can’t stop himself from indulging in pointless sophistry.

Rosencrantz & Guildenstern Are Dead was made for the stage and its regular followers. It does pull off some neat tricks through the magic of cinema as it adds a great deal to the surreal nature of the two characters’ plight, but at the end of the day is still a stage play crafted for those well versed in Shakespeare. I wouldn’t recommend it if you somehow made it through school without reading or seeing Hamlet. 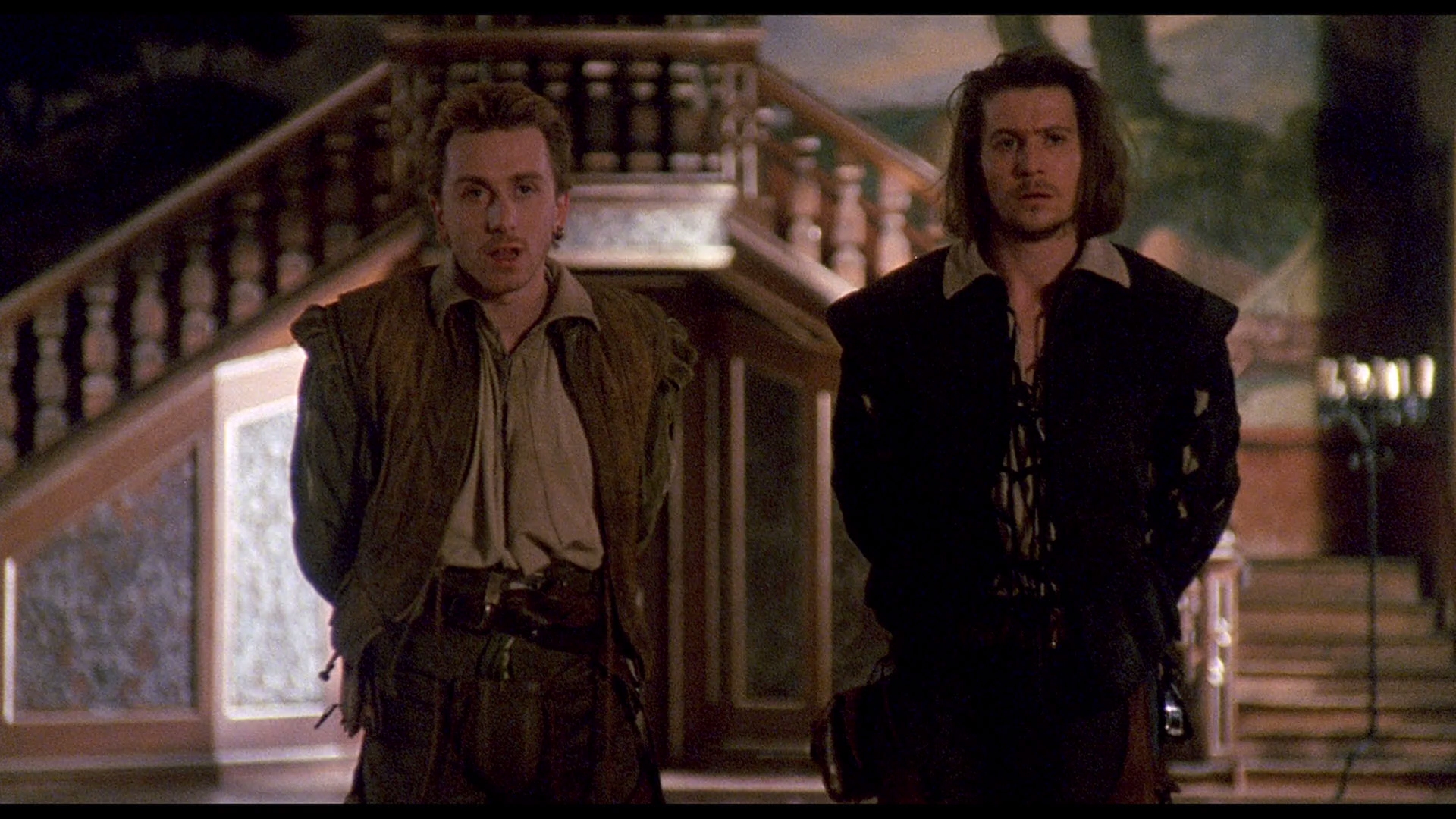 I was hoping for a better transfer from this 25th Anniversary edition by Image Entertainment. They released the film on DVD over ten years ago and it appears that same master was used once again for this Blu-ray. There are modest benefits seen in definition and clarity over the older DVD, which is what happens when an older transfer made years ago and intended for DVD is used for a new 1080P presentation on Blu-ray. This presentation is certainly disappointing from a videophile’s standpoint.

The main feature runs 117 minutes on a BD-50, presented at its appropriate 1.85:1 aspect ratio. It is encoded in AVC, averaging 24.89 Mbps. The older transfer includes ringing and dull resolution. The older film scan doesn’t contain a lot of finer detail but that has more to do with the limits of 2005 scanning tech than dedicated filtering. Good news is that the elements look in fairly good shape, there isn’t much film wear or debris.

The colors are flat and ugly. I wouldn’t call the cinematography dismal, but there is little life left in this 35mm film stock as seen on Blu-ray. The absurd comedy was never much for eye candy, coming off quite flat and ordinary in this 1080P video. It is a barely passable presentation that could have been released on Blu-ray many years ago.

Image Entertainment provides a decent 2.0 DTS-HD MA soundtrack in stereo. It has fine fidelity and nice separation in a wide stereo field. What disappoints here is not the stereo mix or its capable lossless sound quality, but the missing surround audio.

Image’s original DVD included both a 5.1 DTS and 5.1 Dolby Digital track. What has happened to those surround options on this Blu-ray? A couple of scenes could have taken prominent advantage of those surround channels. There is nothing inherently poor or bad about this stereo mix, but Image dropped the ball.

I suspect this new interview with Tom Stoppard was the motivating factor getting this Blu-ray released. Nearly an hour long, he sits down for a relaxed interview about the movie and other topics. The other interviews are all archival material taken from the original DVD release. It’s rare to see major stars sit down and talk at this length about movies they did much earlier in their careers, so they offer a fascinating glimpse.

Considering the poor transfer and missing surround audio, these special features will have to weigh heavily on prospective buyers’ minds. The new interview is nice to have but I am not sure its presence alone is worth it for owners of the original DVD.

25th Anniversary Interview With Tom Stoppard (55:37 in HD) – A 2015 interview held by Michael Brandman in London, made for this release. Stoppard discusses the film and brings up some very interesting things, like seeing it now makes him wish the movie was shorter. He also goes on to discuss writing for movies like Shakespeare In Love. Stoppard is an engaging conversationalist and this interview is worth seeing.

Gary Oldman Interview (58:27 in SD) – An archival interview that ranges far and wide on a number of topics.

Richard Dreyfuss Interview (45:30 in SD) – The actor admits he can’t fully explain the absurd meta-nature of the movie in this interview. He also discusses the pressures of winning a Best Actor Oscar so early in his career.

Tom Stoppard Interview (59:09 in SD) – A lengthy archival interview much like the new one, this works as a companion piece as the director explains his vision and the genesis behind the initial play.