At three hours, Boyhood disappears into its length. If it didn’t, the point would be lost.

Boyhood is a marvel in its background. Well noted or otherwise, Richard Linklater’s piece was completed over 4,000 days – even if Boyhood was filmed on just 45 of them. Forty five separate days over a dozen years where entire crews need pulled together, edits need done, actors corralled, all with a stroke of luck. Reshoots later would be impossible, all with the potential totality of looming contractual problems, unexpected disaster, and mortality.

For the effort, Boyhood becomes a story of confusion, complexity, understanding, and personal reflection – or just life. As much as it is Mason’s (Ellar Coltrane) story, this feature depicts adult relationships and those connections to childhood which build those around Boyhood’s narrative center.

Nothing in the film is separated by stopping points. No intrusive or direct indicators are given to the passage of time. Mason ages naturally. Internet era technology pursues him. Pop culture is trailing. Mammoth CRTs are replaced by LCDs and cordless phones give way to mobile video chats. Anachronisms are avoided.

If it is predictable, it’s only because everyone watching has lived it.

In some way, Boyhood is a collection of “in the now” short burst stories, adaptive to age and life events across the spectrum of five to eighteen years old. The assemblage of circumstances are vivid, from abusive alcoholic fathers to more somber life notes from an on again, off again paternal dad in Ethan Hawke. Boyhood never repeats or succumbs to patterns. If it is predictable, it’s only because everyone watching has lived it in some form.

Yes, the effort is a catch all. These events are often standard bearers for the dramatic (heated arguments, first break-ups, unsure future considerations) yet these are overcome by their ability to seamlessly branch off into one another.

Things happen without the realization of lost time, Boyhood’s grandest accomplishment. They do, in fact, grow up so fast. Opening shots linger on Mason’s stare into clouds which turns into lazy Saturday’s playing “Halo”. What seems like a handful of scenes later, he’s growing facial hair and turning into a scholarship-bound photographer. The filmmaking instincts which keep this story pathway clear and ensure scenes are never in juxtaposition or unnecessary is remarkable. Editing skill produces a lively depiction of the march toward adulthood.

Notably, people appear on screen and become abandoned as characters. That’s another trick of Boyhood: Friendships evaporate, people move and everyone is blind to it. Some last one scene without whereabouts of where they came from or where they end up. That could be Boyhood’s strongest reflective property, although in a search for broadness, any scene could trigger memories or thoughts. This is more than mammoth filmmaking – it’s a reservoir of potential recollections waiting to be soaked up.

And, it’s spectacular storytelling without falling victim to novelty. 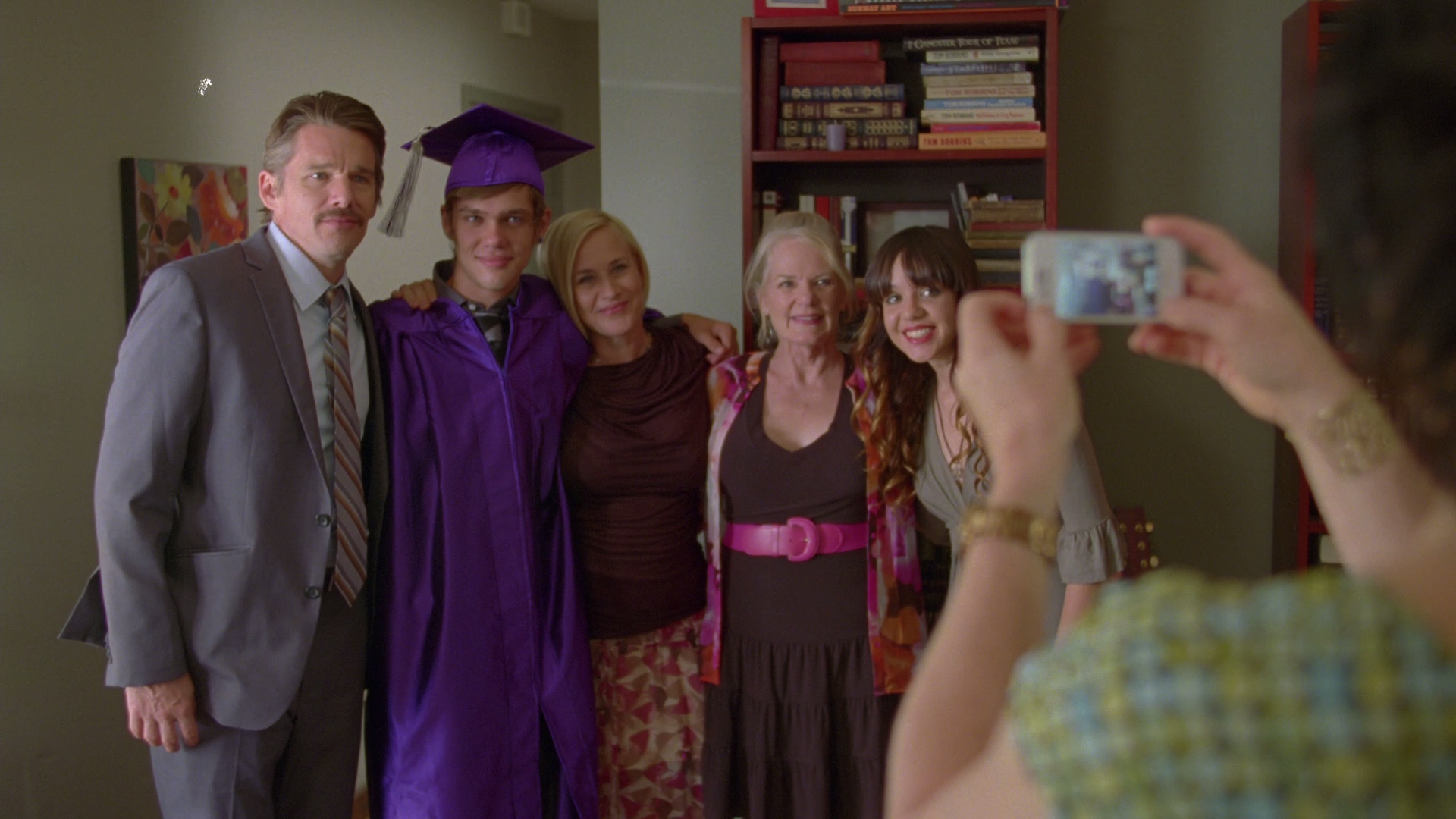 Smartly shot on 35mm film instead of giving way to inconsistencies in digital cinemas earliest days, Boyhood comes with a veneer of grain, typically limited in fluctuation. A smattering of shots cause a rise in intensity (mostly at night), limited enough in quantity as to be of little bother. Paramount’s thick AVC encode is enough to handle any grievances.

Print damage is evident. Some of the earlier footage carries some notable specks. Logically, holding onto some of this footage (with limited means for back-up in 2002) for such an amount of time likely caused a few knicks and scrapes. Oddly, one scene in a darkroom is heavily damaged in comparison. A scene at a party which soon follows carries the hallmark of being filtered, entering into a series of trouble spots before recovering.

With anomalies set aside, Boyhood freely breathes. Color correction is invisibly done to keep flesh tones managed equally from the first scene to the last. Primaries keep their heft with a satisfying level of saturation. Likewise, resolution remains stable and fidelity is appealing. Any losses come at the expense of focus which tends to wander. Linklater and two cinematographers (Lee Daniel, Shane F. Kelly) maintain a rather plain documentary aesthetic with few tricks.

Little needs said for black levels and contrast which hold firm. Some black crush can be highlighted during low light situations. Otherwise, as with the rest of this presentation, they’re fine as is.

Is life often this quiet? Boyhood features limited mixing work with the exception of some live music and a soundtrack. Those are vivid and clean, although many have done it better. Surround work is of little consequence elsewhere, barely capturing a sense of space or ambiance.

Dialog is firm in the center with a pleasing audibility which is certainly important. The basic necessities are met. The rest? Not so much.

The 12 Year Project is a lonely featurette, fun as it interviews the cast/crew as various stages of the production run and short at under 20-minutes. Some of it comes across as a time capsule, but Boyhood is too interesting for something this lean.

There is a savior in an hour long Q&A session done after a screening with Linklater and his cast. While some of these tend to be mundane, this one is a bright spot with unique chatter and questions. This is fine conversation.