We’ve now been to Mordor and back again

At some point in this trilogy of Hobbit spectacles, the Hobbit was lost. Martin Freeman’s lowly Bilbo, with his face contorting whimsy and oversized feet, drops into the shadows as Peter Jackson’s mammoth thirst for clever (PG-13) decapitations and enthralling action set pieces stunt all else.

As if it matters. The well critiqued indulgent scope of the pre-quel Hobbit festivities has more than built to this breaking point. To its credit, Battle of the Five Armies feels like it has the luxury of time, smartly setting scale and circumstance before reaching the hour long crescendo of this episodic screen translation.

There is plentiful chit chat concerning a piercingly bright stone, necessary for the character arc of Thorin (Richard Armitage), leading to a torrent of threats between Middle Earth’s usual forces of do gooders. Tensions mount and moose are mounted in a satisfying back-and-forth which, to the credit(s) of this screenwriting team, suffice in generating a plausible stand-alone chapter of The Hobbit (at least once past the prior film’s dangling narrative threads).

Battle of the Five Armies is the shortest entry in any of the cinematic Lord of the Rings canon and arguably the most approachable even amongst the puffier Hobbit entries. This one is more of a two-act structure when taken on its own – pressured peace before the brawling and then chaos when it begins – split divisively with an unmistakable line of brutality. 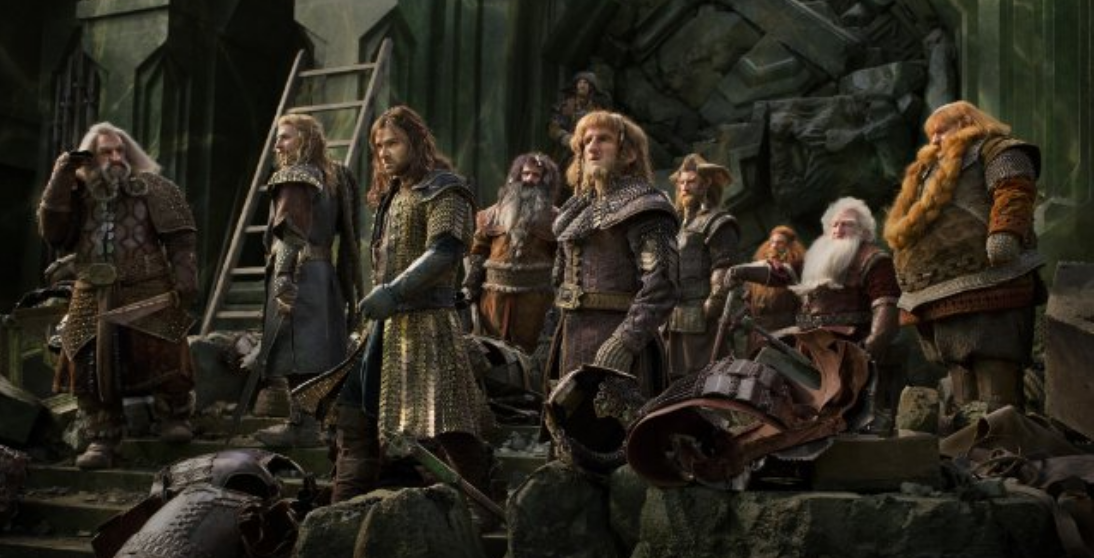 Peter Jackson’s fascination with the elongated dramatic close-up, geeky lip service, and an improbable number of last second saves is tiresome. Battle of the Five Armies is hardly flawless. It is lost enough to introduce then drop thickening story fat such as Lake-town’s spirited female residents taking up arms before the situation meets an abrupt end before any one of them KOs an orc. Maybe those gals needed a moose too, or maybe The Hobbit still lacks editing maturation. It’s probably the moose though.

The Hobbit has served the needs of its one ring-propelled brethren by slowly escalating and rising scale up to this gratifying climax.

Even with the melee of physically ferocious trolls and other herculean CG deformities, Battle of the Five Armies begins teetering on the edge of a Middle Earth-ian nature expose. Part of this is character – the softer elves march on those forest moose while the rotund dwarves stake their land on muddy pigs – but yet another portion is an attempt to lightly inch up toward Lord of the Rings’ gargantuan elephant-rich clashes. In that way, The Hobbit has served the needs of its one ring-propelled brethren by slowly escalating and rising scale up to this gratifying climax.

This is a miniature film in retrospective comparison. Battle of the Five Armies is a flare up over a mountain stuffed with sparkling luxury. But it is forever scalable, moving from mountainside to dilapidated towns and onto icy peaks. Each provides an abundance of fantastical goofiness (falling stone stair stepping, frozen river sword slicing) and an intelligent visual bookmark as characters drift from the center of core melee to finish their individual stories.

If The Hobbit has left us with anything, it is a sense of how often over cooked this side of the industry often is. No successful idea is allowed to rest while financial gain remains, thus a three-part extravaganza based on one book. Thorin may as well be guarding the windfall home studio Warner Bros. expects from this Tolkien-born franchise rather than Lonely Mountain’s spoils. But, Battle of Five Armies, along with the prior two films, placates those seeking fantasy refuge after Lord of the Rings’ screen departure in 2003. With Jackson and his devoted fandom at the lens, these Hobbitses were destined for nothing less than prosperity anyway. Gleeful, nutty prosperity.