Nostalgia is finite and Expendables 3 has run out. This one is down to fumes.

Expendables 3 is too far, conceptually, from the original point. Stallone, Couture, Lundgren, Crews, Statham, Snipes – they’re meant to be here for their personal contributions to retro action cinema, or in some cases merely action cinema.

But then Twilight star Kellan Lutz, boxer Victor Ortiz, UFC star Ronda Rousey, and whose-its Glen Powell stuff this thin story of mercenary camaraderie. Call it a torch passing; that would not be wrong. However, this showcase for muscular seniors has drifted, maybe out of desperation, maybe general tiredness. A bit of attempted freshness on the writing side from Olympus Has Fallen’s Creighton Rothenberger and Katrin Benedikt is painfully misguided.

All of the acceptably moronic, somewhat self-referential dialog from this group of roughnecks (especially a fired up Wesley Snipes) during the intro chapters fades into nothingness. Pun-y and jokey one-liners slog Expendables 3 to a length almost a half hour longer than either of the in-and-out predecessors. It’s not fun anymore.

Part of this is a need for character. Expendables 3 can only rely on resumes for a portion of its stars. The rest need bundled, sold, and marketed though their faceless attitudes. Each barely forms an identity, if turning into a commendable collection of different sexes and cultural backgrounds.

Stallone and his reliable cohorts are run aground, lost amidst the introduction of these feisty newcomers. Rousey, whose acting credentials are still woozy, manages to punch, slam, and break stuff convincingly. Antonio Banderas is having a blast too as a last second recruit, with Mel Gibson chewing the remaining scenery as a classic music loving, weapons dealing, art critic villain. It’s a wonder why the original Expendables are even here.

Guns are still primed and rocket launchers are aplenty – there is still an incalculable amount of death. Studio side, it feels restricted. Somehow, Expendables 3 makes fighting an entire army feel puny. Action scenes have shrunk in scale and rely on tainted CG to sell their explosions. “Vintage” has been dropped from the vernacular.

Expendables 3 is like having a swimming pool but no water. If you’re an imaginative child, you can make something out it – a skate ramp or pretend bunker. But it’s not a pool. You’re not swimming. It’s missing an intangible, that crucial piece which once made it what it was. This series isn’t throwing back anymore so much as it is throwing up. 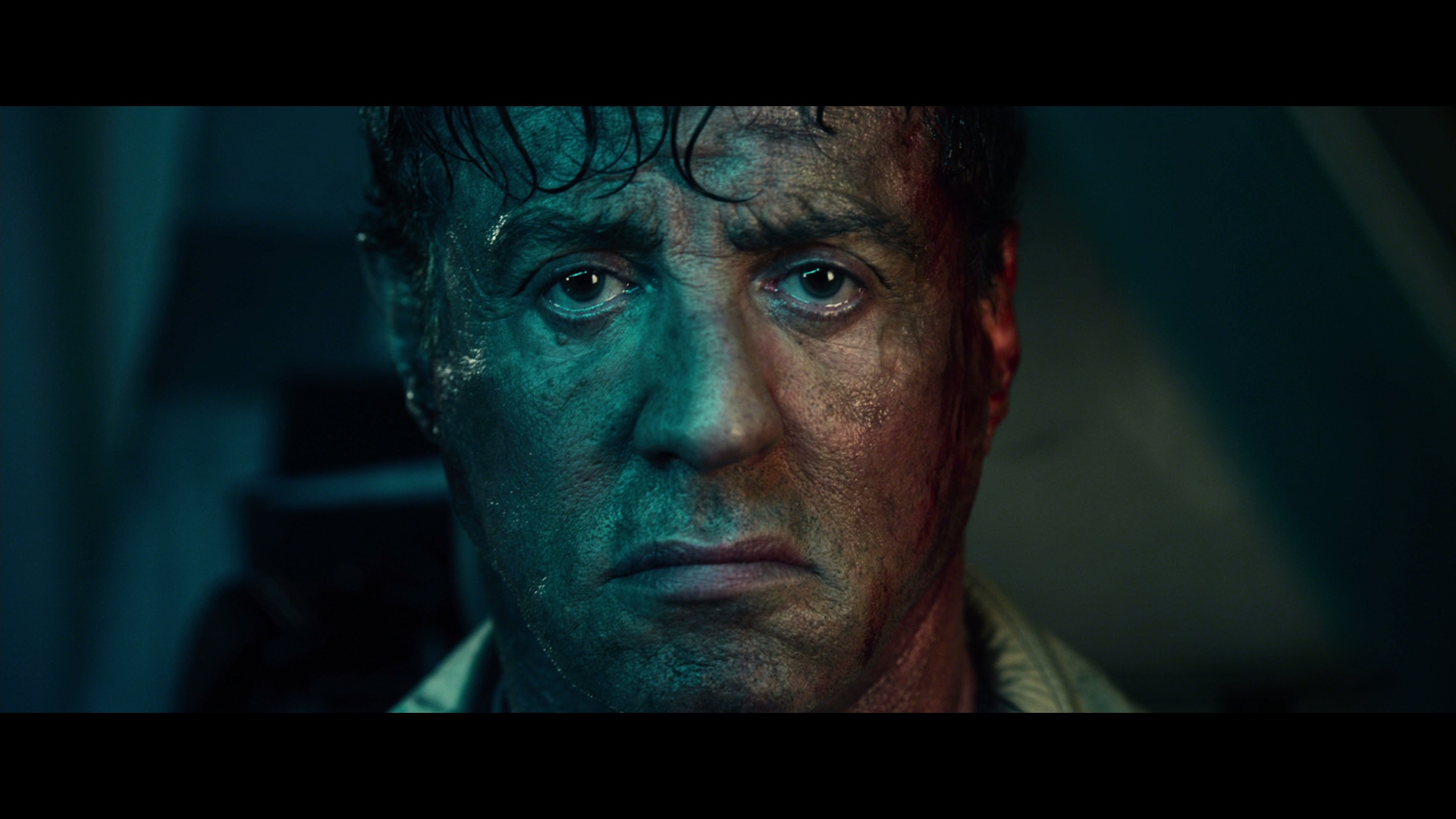 This is not a pretty film. Neither was Expendables 2. Shot digitally, this latest is bothered by torrents of noise, low resolution (likely stock) location footage, and all-around saggy detail. Inconsistency in close is indicative of lousy source material from the lens of the Red Epic, supposedly captured in 4K but never appearing as such.

Shots that win are few. Most of them are close-ups on Wesley Snipes for some reason. Many more take on a filtered or noise reduced look, possibly smothered by post-production work. While this lack of cleanliness adds tone, the effect is never laid on evenly. It looks rushed.

In post-production, three colors were used to tint most of the scenes – an acidic yellow, orange, and pale blue. Few other colors are allowed to breathe. Flesh tones would be a break. Black levels and contrast land in passable territory, although some element probably had to. Day or night, Expendables 3 is comfortable in its depth.

From Lionsgate, the Blu-ray encode is a touch pinched by encoding parameters, although outside of some abhorrent banding on the night skyline, none of these issues seem to be a fault of the compression process. Or, at least the AVC work is not adding to them. Everything feels dropped to direct-to-video levels of uncaring. It’s a shame.

While the series has lost oomph, at least the audio tracks remain as enthusiastically loud as ever. Expendables 3 is a migraine inducer of grenades, tank shells, C4, shotguns, and anything fired by Terry Crews. Subwoofers with auto-off features will never need the functionality here.

Aggression is immense, slinging bullets across the full width of the soundstage. Directionality is pristine. Despite what may seem to some like noise, the sonic space is carefully considered. Each shot has direction and placement. Same goes for debris from explosions. In a mountainous region, Stallone fires a few shots which ring out into the range for an extensive echo. Almost every round has that much dedication given to it.

Side note: Expendables 3 was released in a rental exclusive edition with compressed Dolby Digital audio rather than Atmos/TrueHD 7.1. Buyer beware in the used market.

Bonuses open with an hour long making-of, somewhat bland and even generic, a shame given its length. Behind-the-scenes footage is a highlight, the general interviews not so much. New Blood is a short intro to the refreshed cast, with Total Action Package highlighting key action moments. One extended scene and a gag reel are left.

Expendables 3 also comes in an unrated cut, although the violence quotient barely seems changed and the added dialog only slows things down further.