Marvel turns off their once strong sense of reality for this off-the-wall adventure through space with a mismatched crew who are out to save… well, everything. While the narrative follows the too familiar ebbs and flows of these comic book behemoths, Guardians of the Galaxy is able to overcome those simple mistakes with mounds of character, witty humor, and booming action. Out of everyone in Marvel’s current canon, this the crew to sit down and have a coffee with. Their stories would be awesome.

Read our theatrical review of Guardians of the Galaxy for more.

Guardians of the Galaxy features an alternating aspect ratio in 3D, swapping between screen filling open matte IMAX and tighter 2.40:1 forms. With the 2D disc, the ratio remains stable via the wider format. With the screen space afforded to the typical IMAX ratio, this is unquestionably one of the cleanest, purest, sharpest, and pristine live action Blu-ray discs. It trounces the rest of Marvel/Disney’s HD output and expands the film’s scope.

During the finale as Ronan marches his ships toward populated cities, the gargantuan spectacle is held together by resolution on top of resolution, with a coating of resolution. Costumes soar in detailed luster, CG is aided by the exactness, and explosions are totally beautiful.

You can throw anything at those scenes. They exist free of noise, aliasing, compression; they’re flawless images just pouring out in sequence. Contrast is vivid, color choices are staggering, and depth is monumental. Guardians, at its peak, has some animated movies cowering under it, pleading for mercy. Disney’s disc must love the thesaurus for all its adjectives to “awesome.” Each one fits.

Things do calm down from this HD love fest. Non-open matte IMAX shots lose some (keyword: some) of their overarching splendor. Resolution is touch calmer, and fidelity is lightened slightly. Medium shots lack the punch, but not in an unnatural way which would show limitations of their digital sources.

Cinematography is dazzling in focus with color correction turning into a narrative-bound downer. The torrent of blues in ship interiors can grow tiring. It makes other story components all the stronger in visual merit though. Black levels can be caught in an overcast haze – plenty of smoke in this movie – although never enough to eliminate depth. This is not only a showcase, it’s almost perfect.

And hey, even the 3D has some bite. Things are a touch better than in theaters actually, with a deeper separation between foreground and background, if still offering little exploitative trickery. Of course, this also comes back to IMAX scenarios where the full breadth of the screen can produce lavish work. Ships and planets flying by, lasers shot into the screen; there is definite attention to post conversion even if it is subdued in terms of aggression. A first act-closing zero gravity moment (and this also goes for any scenes with slow motion, floating debris) is marvelous. While not always on the stereoscopic attack, Guardians of the Galaxy has some 3D bliss to offer.

About the 2.40:1 frame: Imagery frequently breaks the illusion, spilling over into the dead space. It’s not true 2.40:1 (in 3D anyway) as with almost any of these alternating ratio movies. However, this little bit of 3D trickery has not lost its luster. The effect is small, but powerful. 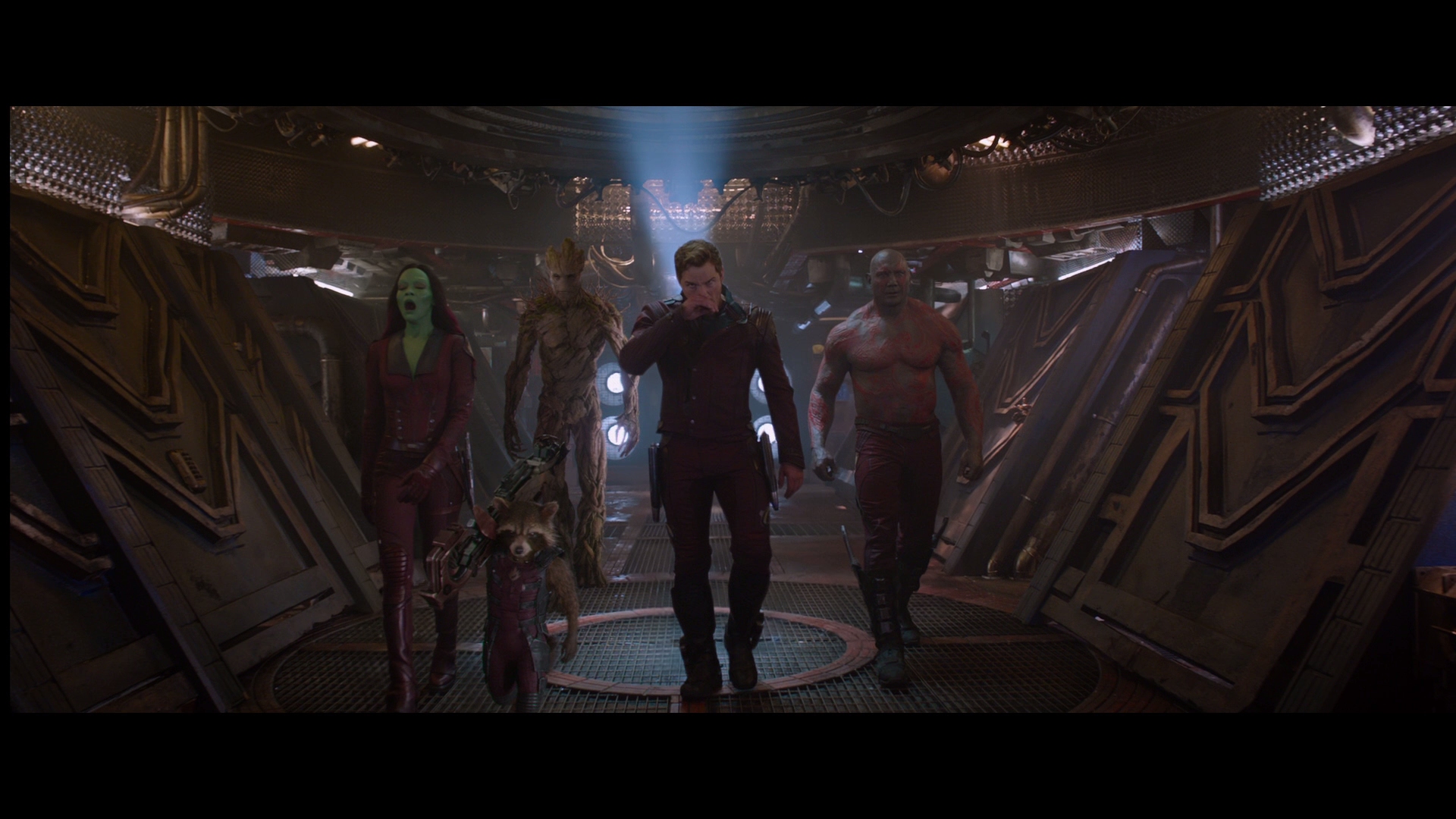 With a heralded retro pop soundtrack, Disney’s DTS-HD mastering steps up to reproduce those tunes without fault. Vocals are perfect, instrumental spreads are great, and low-end work is smooth.

And then things go boom. Guardians of the Galaxy begins with some immediacy as Peter Quill is picked up with ship engines in a low hover and brakes slamming hard into the subwoofer. Key scenes are almost any action set-piece with the prison escape exemplary in capturing motion as guard bots hum as they spin around characters. Gunfire jumps from spot to spot convincingly, with caution used to place each round rather than making this a sea of noise. Little details are not lost. By the end, vehicles gather in a swarm of pulse beams and mini-explosions which show tremendous grace as they pass between channels.

Director James Gunn leads off with commentary duties, an interesting enough track which plows through the details of this property and various secrets. Guide to the Galaxy, the first and longest of the featurettes (21 minutes) is a bit more playful than some of these studio pieces, although too short to give wider context. Intergalactic Visual Effects is a short blurb on creating the various elements needed for a film like this. Ultimately, it’s also abridged and simple.

A gag reel has some laughs, a few deleted scenes (with optional commentary) are decent enough, and a promo for Avengers: Age of Ultron is disappointingly minimal. For a movie of this scale (and profit), these bonuses are meager.