More like, “The Dragon is Trained So Let’s Make an Even Better Movie”

Things are bumpy for How to Train Your Dragon 2’s opening moments, depicting a raucous race scenario which carefully (and clearly) blabbers the names of each mythical, fire breathing pet in an effort to burn them into young brains. This film exists to sell more toys – at first.

And then it changes, wonderfully even. Hiccup (Jay Baruchel) begins a journey based on family bonding, with multiple potential finales and an eventually powerful pay-off. Importantly, Dragon 2 is not overactive or eager. Hiccup’s considerable story, and likewise that of his homeland Berk five years after domesticating the creatures, is unusually big and busy for present animation.

How to Train Your Dragon has a comfortable bond with kids, turning the fire-breathing monsters of endless lore from fearsome to safe, providing identifiable mannerisms of puppies and kittens. Hiccup becomes a voice of the village progressive who, now having created his island’s all-dragon economy, sets off to quell an uprising of predictably dark evil.

At a mere 90-minutes, Dragon 2 has richer characters than some do at twice that length

It’s a film of change, teaching target audiences how they can inspire and lead, but without losing the oomph of an emotively elaborate family drama. At a mere 90-minutes, Dragon 2 has richer characters than some do at twice that length with a compact script fueling each event with well managed pacing. Dull moments are not a problem.

Does it function without Dreamworks? Probably not. Dragon 2 is dense in digital performance, capturing nuances in behavior typically reserved for live action. The eyes tell all. While Dreamworks tends to slide around and slip up with say, The Croods or those excessive Penguins, their hunkered down, well manicured material is notably competitive in a market often gluttonous for theatrical space.

This work is funny, charming, and rich all at once, even elegant in its solutions to story problems, arguably a step up from the establishing original. Dragon 2 has more to work from. Inter-personal conflict and clan bonding lead to startlingly beautiful scenes, dramatically building to harsh, unforgiving heartbreak usually held for Disney in the opening 20-minutes of their features. In an era where animation feels swelled only by the ebbs and flows of marketing, Dragon 2 is curiously coy. Once the commercial ends, narrative takes hold and it’s delightful. 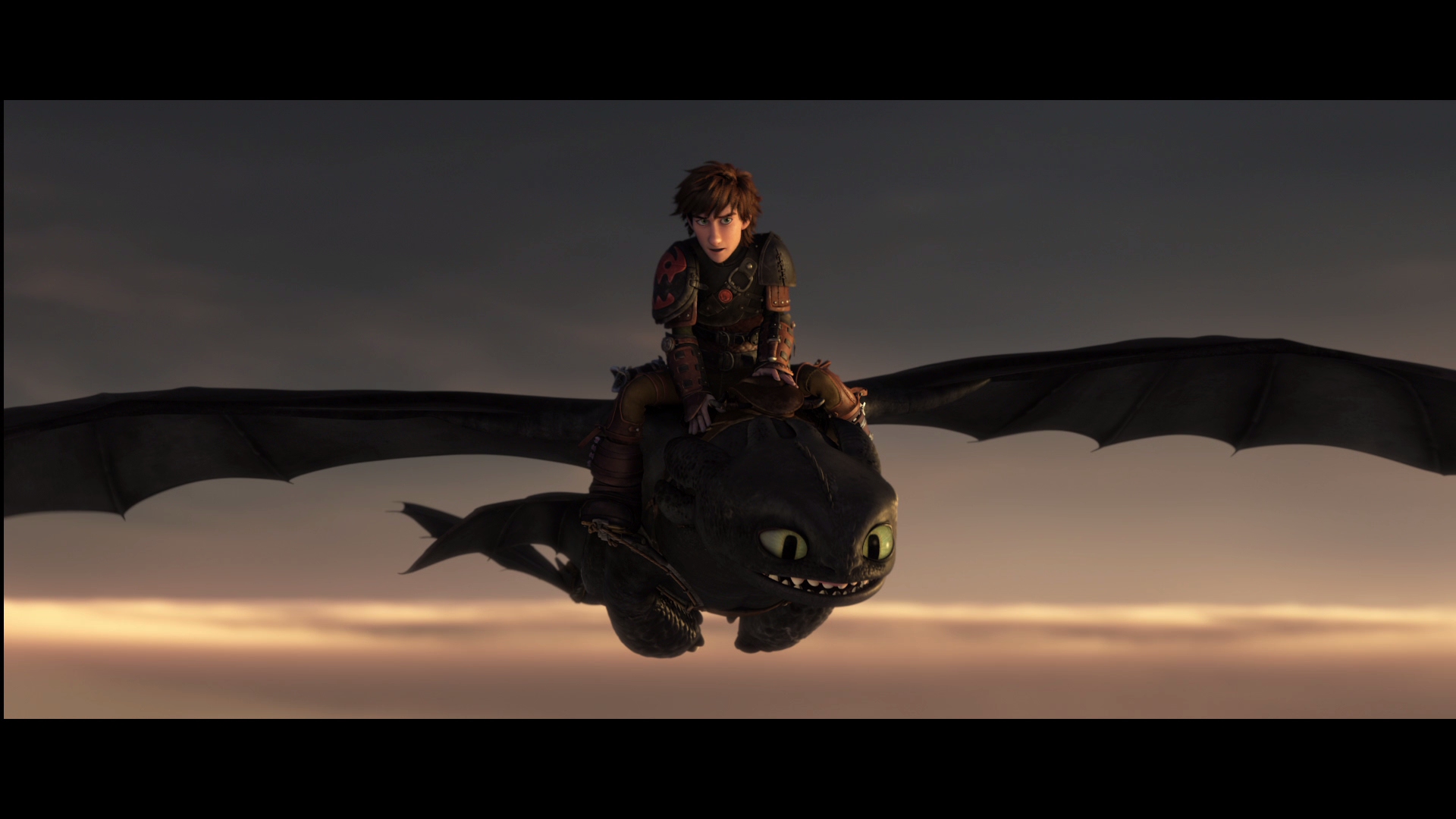 Visuals are splashed with frequent color, a bevy of primary assortments meant to dazzle. Berk’s rocky brown hillside turns into vibrant arctic blues/greens and those into dreary gray to signal the rise of Dragon 2’s baddie. Black levels soften in some of these interiors, but the one constant is the vividness of the dragons, super saturated with varied scale tones.

The disc is a consistent marvel of resolution, using the technology to resolve background minutiae or set scale. During wartime scenarios, ships are seen deep into the horizon until mist takes over without a lick of aliasing on any of those sharp lines. Dragon 2 turns mammoth in conflict, overloading the screen with dueling Leviathan creatures and all of their minor character features. It’s perfect.

The disc is a consistent marvel of resolution, using the technology to resolve background minutiae or set scale.

It’s certainly configured for 3D as well, considerate to the necessity of the format, if not too aggressive in breaking through the front. Much can be made of the flying sequences, keeping dragons (their wings and tails especially) poking out a touch while backgrounds create the required depth. Shots are made for layers, keeping foreground items sustained for most of the movie. Bulbous characters feel as such rather than flat cutouts, and there is even a sense of depth to something like dragon mouths as they open to breathe fire. A handful of moments resort to direct trickery – tossed snow, flame breath – but these are few. Dragon 2’s 3D is an enhancement.

If it runs into trouble, it’s with crosstalk. In the interior of ice caves, light drops and the stereoscopic style begins to lose grip. A few moments as Hiccup is first greeted by a new dragon corp are unfortunately lost. In total, the crosstalk bothers are around five minutes at the most, and are certainly less intrusive on higher-end displays that handle the issue.

Perky and lively, Dragon 2 harnesses every channel of this wide 7.1 effort. Stereos capture side-to-side flight and panning dialog while surrounds stay active within the space afforded. Additional channels are eager to work, adding ambiance to battle scenes as small collections of characters face off. All of those swords and screams are well embellished.

Highlights are plentiful, none more so than with the battle of two monstrous Leviathans who roar, stomp, and clash with all of weight afforded by the low-end. Their clash is an aural peak. It’s thick and crowded and does not lose the smaller human-scale needed while they battle below. Bass elsewhere, from fire to collapsing structures, almost seems puny when in comparison.

While most of the extras veer toward additional animation or info for the kids, How to Train Your Dragon 2 has some surprises. First is an energetic commentary with a cross-section of the production team from writer/director Dean DeBlois to animator Simon Otto, producer Bonnie Arnold, and production designer Pierre-Olivier Vincent. And from there, Where No One Goes covers a wealth of production insight for almost an hour, terrifically deep for an animated feature. Most offer a few scenes on the cast and some games before cutting things short. Plus, some deleted scenes offer a touch more in terms of making-of bonuses.

Dawn of the Dragon Racers begins the traditional quadrant of the disc with shorts, a fairly lengthy addition which details how the “sport” from the opening of the movie came to be. The lesser of the two is Berk’s Dragon World all five minutes of a tour. A bunch of gallery-esque features offer details on weapons, dragons, and the film itself. Trailers offer a conclusion.