Overwrought, illogical, and even uncomfortable, this Michael Bay-produced reboot of Teenage Mutant Ninja Turtles is a hard misfire. The film is a constant barrage of noise, packed with uneasy violence, sexism, and a plot which makes so little sense, all of the dramatic weight is lost. Designs of the title characters themselves have been destined for meme-dom, making them less fun to watch and more in-tune with their frat boy attitudes.

The Michael Bay look is in effect for Ninja Turtles, which means crushing shadows, eccentric color selections, and unbelievable sharpness. In that sense, Turtles is also familiar and same-y with little identity of its own. Those New York aerials are sweltering with oranges, giving the city a look shared with any of the Transformers films.

Any problems are at the source. Smoothing on Megan Fox’s face – completely inconsistent and egregious – robs the piece of texture suddenly as opposed the grime-laden Turtles or non-made up Will Arnett. Surrounding production design, super busy and crowded as it is, proves a boon to this disc. Resolution is superb, capturing the nuances of the aged sewer, the messy lair, or the scale of mountain-side action.

Uber saturated primary colors are only downed by the post production tinkering which fails to lay off the buttons for yellow and teal. The screen is often doused with those. But, some other hues escape; each Turtle is notably deep green no matter where the palette is headed. Heavy highlighting and concentrated blacks add brutal depth which is wholly unnatural yet safely appealing to wide audiences.

No matter what else the presentation is doing, detail is a clear winner. Paramount’s sublime encode packs up rapid action scenes and produces them without bitrate slowdowns. Compression is never a bother which means precision is almost absurdly ideal for any display. Fidelity is often masterful in close, owning significantly to the texture artists who brought the Turtles into a digital realm. The all-daylight finale in the city is a marvel.

Bonus features make note of 3D, stating how Ninja Turtles was shot for the format. For some of the runtime, that is believable. An opening monologue, with the comic book style intact, is wonderfully layered. Then stereoscopic effects become timid. Ancillary additions become the best example, rain or smoke always punched into the foreground. Depth is there, but not into levels of extravagance.

Then the mountain slide happens and everything changes. Everything. Not only is this scene (and all following) designed to keep camera work insatiable for exaggerated, almost fish-eye lensing, 3D work pushes deep in the necessary ways. Layers of kicked up snow, passing trucks, electrical lines fired into the camera, Turtles sweeping through the cinematography; it’s an eclectic scenario for the format. During the climax, the frame becomes invisibly squished so Donatello’s bow can artificially breach the matte. Some of the dizzying angles looking down from the skyscraper are spectacular too. 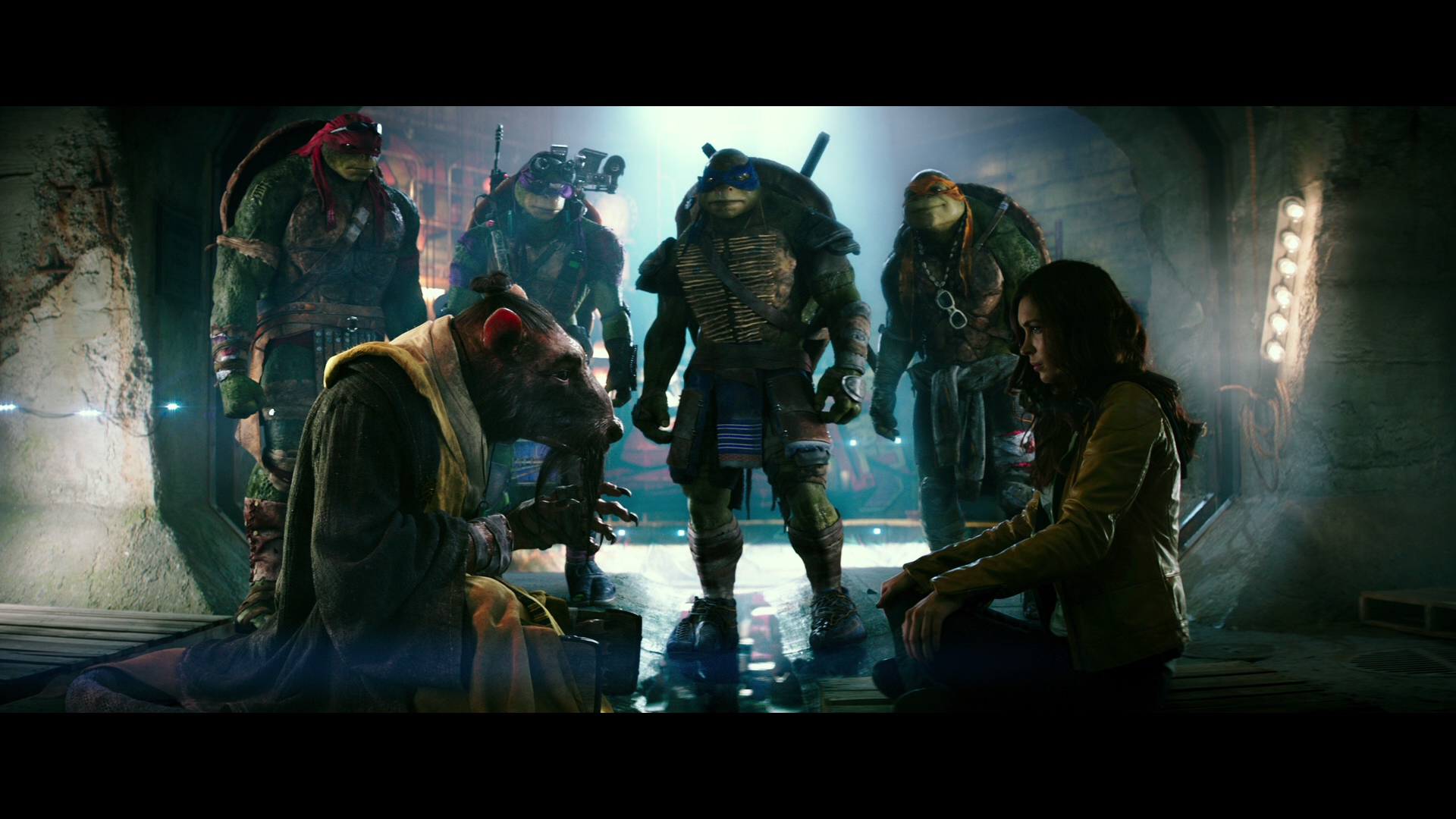 Bass, bass, bass. Lots of bass. That’s the hallmark of this TrueHD/Atmos track which finds the low-end too alluring to ever stop using it. Every punch, kick, bullet, and slam receives a sizable jolt to a point where this design blends itself together. Differentiation between attacks is rare. Nuance is not the disc’s strongest asset.

That isn’t to say certain moments do not stand out. Again, the mountain slide is great, with deep, gurgling LFE as a truck trailer swings around and passes through the frame with the full assistance of each channel. Soundtrack work likes to bottom out too for effect.

Channel separation, when not swallowed by the sub, is on point. Attacks reach into the sides, dialog travels, and surround effects are never missed. Precision is high, careful enough as to not overwhelm. Swords clash in each speaker with thrown weapons reaching their point only after appropriately traveling through the stage. Foot Clan soldiers are uncomfortably tossed into walls during a subway brawl, requiring the full spread of the front soundstage to work. It’s fine work, just aggressive.

Rather miniscule bonuses are on tap, with Digital Reality leading with 18-minutes on the special effects. Seeing actors on set in their motion capture suits is quite comical, with explanations as to the inner-workings satisfying enough for such an extra. In Your Face chats about 3D, and can even be viewed in the format for a runtime of a touch over four minutes.

It Ain’t Easy Being Green focuses on the Turtle’s physical performers and their style. Evolutionary Mash-Up follows, a dopey bit of science and history linking the Turtle elements together from species evolution to ninjas. Turtle Rock pieces together Brian Tyler’s approach to creating the score. An extended ending (a report by April) is under a minute, with a music video (and promo making-of the video) completing the disc.