What begins as a simple haunted house mystery turns into cheeky fun in Housebound. A young woman is placed under home detention in this horror comedy with a sly sense of humor. The New Zealand film is from writer and director Gerard Johnstone. Starring Morgana O’Reilly, Rima Te Wiati and Glen-Paul Waru, the New Zealand cast acquits itself quite well in a film that melds different genres. The overly long horror film does have its pacing issues. Housebound could have been a pitch-perfect send-up of horror tropes if thirty minutes had been shaved from its nearly two hours.

After committing a crime, Kylie Bucknell (Morgana O’Reilly) is sentenced to eight months of home detention at her mother’s residence, an old home that looks every bit haunted. Miriam (Rima Te Wiati)is Kylie’s mother, a sweet woman that doesn’t seem to know what to do with her wayward daughter. Confined to the property by an electronic monitoring bracelet that alerts Amos (Glen-Paul Waru) if she leaves, Kylie bitterly resents living with her mother. The mystery gets under way when Kylie starts experiencing unwanted attention from a hostile entity inside the house. Miriam is a devoted believer in the supernatural and thinks the house is haunted. Kylie thinks she is bonkers and that someone is messing with her mind.

Things become funnier when Amos learns of the haunting. An amicable security officer, Amos has a keen interest in paranormal research. He wires Miriam’s house with video and sensors. Kylie is the primary focus of attention for this hostile entity, though things are not always what they appear on the surface. Housebound deftly plays the fine line between serious thriller and horror comedy. It cleverly sends up myriad horror tropes as we learn more and more about this haunted house. One of the funnier bits is when Kylie has to confront a teddy bear speaking in a demonic voice. She reacts as normal person would, not as a stereotypical character trapped in a horror film. The narrative has a few nice twists and misdirections in its plot, especially as the cast grows larger.

Everything sounds great about Housebound so far, right? A smart horror film with a touch of comedy and kooky ensemble cast should make for a great movie. Alas, Housebound runs far too long for its basic concept. The script is fairly tight but expands the running time to nearly two hours, introducing a number of red herrings and unneeded characters. Housebound would have been nearly perfect with twenty or thirty minutes cut from the film. Compressing the first act might have done the trick.

I liked Housebound, I did not love it. There is a lot to like about its characters, especially Kylie and Amos. The witty touches of comedy sprinkled throughout its twists and turns save the overly long story. If one likes the lighter side of horror like Army of Darkness, Housebound should make fine entertainment for you. 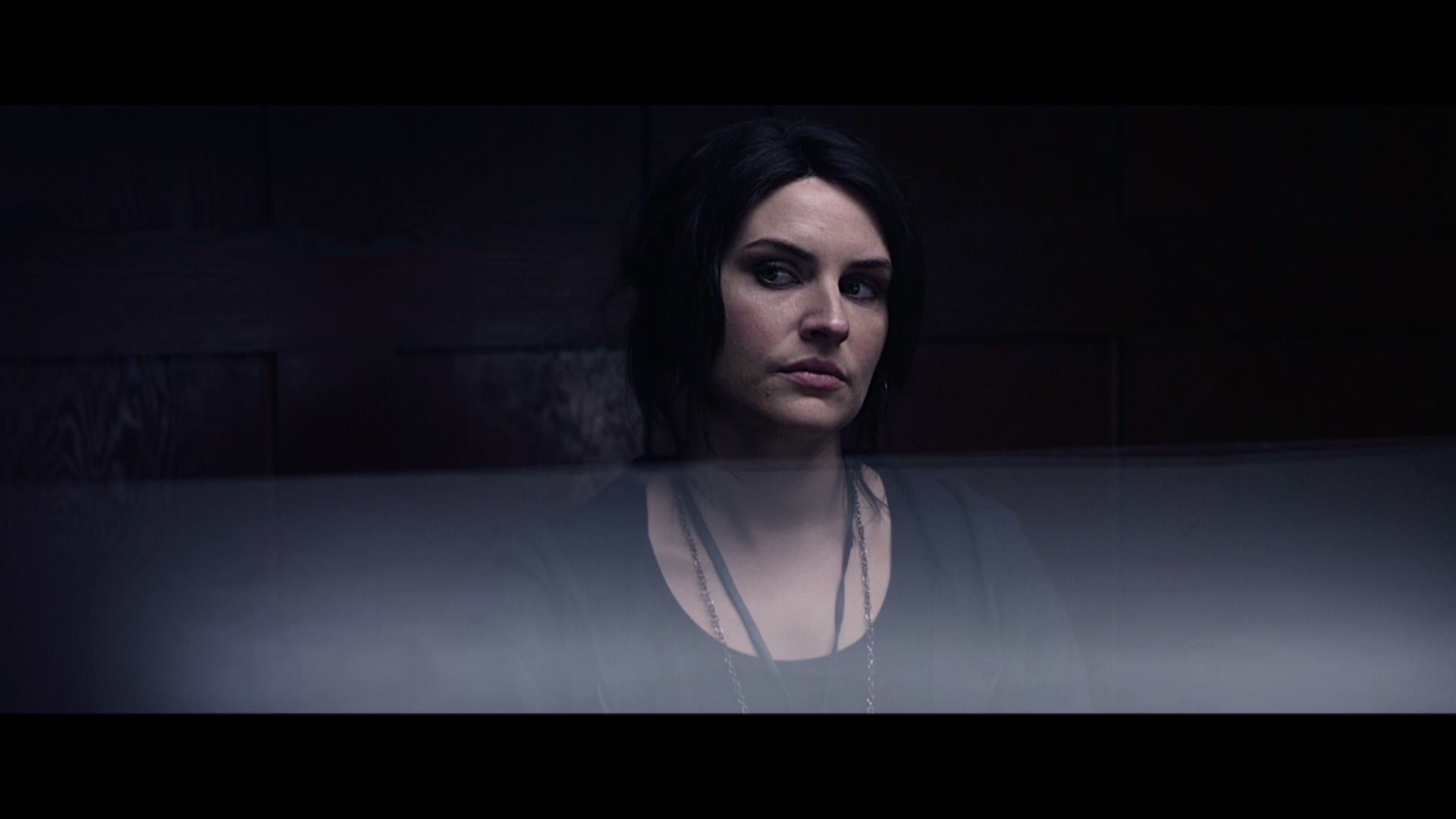 Label XLRator Media gives Housebound a satisfactory Blu-ray presentation, preserving its native digital cinematography. Housebound is rather average-looking for a new release, the New Zealand film lacking the punch and depth of more expensive filmmaking. Less than stellar shadow delineation in the darkened interiors of the haunted house lead to diminished clarity. The main feature is framed in its proper letterbox widescreen 2.35:1 format at 1080P resolution.

Confined to a single BD-25, the 111-minute main feature has an adequate AVC video encode which averages 20 Mbps. There is some banding and obvious macroblocking in the darkest shots, which could have been avoided. The compression parameters are sufficient in the better lit shots, cleanly replicating the fine detail.

Some crushing is apparent in the black levels, though Housebound’s contrast is generally very good. This is a film that has been drained of the brighter primary colors, setting a dark tone. The picture is sharp but mildly dull in high-frequency content. Housebound’s pedestrian cinematography lacks the kind of extreme detail and clarity often found in digitally-shot movies. If one is paying attention, a handful of scenes include high-amplitude aliasing. That likely stems from low-budget composite work.

For an independent horror film, Housebound has a solid 5.1 DTS-HD MA soundtrack. The mix features strong bass and a well-crafted surround experience, expanding the soundfield to include a variety of panning effects and cues. The dialogue is completely intelligible and crisply recorded, rendered in modern fidelity. This soundtrack elegantly balances the horror score with Foley work and dialogue. There is ample dynamic range and it has not been overly compressed. The soundtrack is a vital part of Housebound as things very much go bump in the night, and hearing it on a decent surround system will definitely enhance its entertainment value.

XLRator Media includes English SDH as the lone subtitle option. It displays in a crude, white font and stays inside the letterbox framing at all times.

Little did I know that the best commentary I’ve heard in the past year would be on this movie. In fact, I enjoyed the commentary on Housebound more than the actual movie, it is that good.

Deleted Scenes (03:59 in HD) – Three deleted scenes are provided, all with text introductions explaining why they were cut. One was cut for time and one for the dramatically different tone it provided.

Commentary by the Filmmakers – Writer/Director Gerard Johnstone, producer Luke Sharp, and Executive Producer Simon Riera have a blast on this commentary. It is a loose, jokey discussion, perfectly self-aware of the ins and outs of making a horror movie. This is the model if you want an unknown movie to have a fun, enjoyable commentary. Background and behind-the-scenes stuff is provided, but the participants aren’t afraid to wander into other subjects.