Time to drink from the (slightly processed) fire hose!

UHF is a support group film for outcasts. No matter your oddity, personality, or quirk, UHF will find you a home. It does for Stanley Spadowski, Philo of Zardon, and that one guy who really likes fish.

As he does to the cliches of the music industry, Weird Al Yankovic punches the Hollywood system of sequel bait, bashes their idiotic action sequences, and frames it all with a spoof of ’80s feel good flicks. Puffy hair in tow, Yankovic – born singer but not born actor – becomes steroid enhanced Sylvester Stallone, a TV star, and more as lowly grill cook George Newman. He gets the girl, a career, and pulls the town together over a lowly TV station. Geeks everywhere have their man.

In the sense of good taste, good filmmaking, and good acting, UHF is a mess. Partway through, any sense of story progression is interrupted by a music video. Interstitial segments intended as Channel 62 programming turn UHF into an amalgam of sketch comedy. It’s as erratic as one must imagine Weird Al’s thought process is.

Through the glaze of weirdness, UHF becomes a cult hit in the sense that is applies to a definitive cult audience – too messy for mainstream, too soft for the hardcore, and utterly baffling to most everyone else. But, as the film focuses on the weirdly lucid microcosm of now extinct television production, it speaks to those who most need it. Michael Richard’s impossibly rowdy performance of mop-loving janitor Stanley Spadowski is utterly charming. Audiences are never provided clear answers as to Spadowski’s mindset; he is who is, a proud individual and impromptu celebrity who sends out positivity to those who feel defeated.

Like the rabbit ear TV signals which would power Channel 62, Weird Al’s lone starring film is unstable and unclear. A critical flop upon release, age has broken the film of good taste. Political correctness be damned: UHF is teaching puppies how to fly (not well either), screaming at people for their stupidity, and scarring children with bouts of untouched depression. Oh, and fire hoses. Weirdly (pun intended), UHF has not aged. It’s one of the few comedy films to ever accidentally grow in daring over time. Disney would never release this uncut.

But why pander to PC critics? UHF’s inadvertent intelligence focuses on a group with nothing to lose: Societal rejects who speak up, stand up, and find their niche – those outsiders who reject corporate entertainment monopolies, eat Twinkie dogs spritzed with cheese, buy a crap ton of spatulas, and want to laugh as turtles are turned into suction cups for our fantasy enjoyment. In that sense, UHF may be representing more of us than it ever realized. 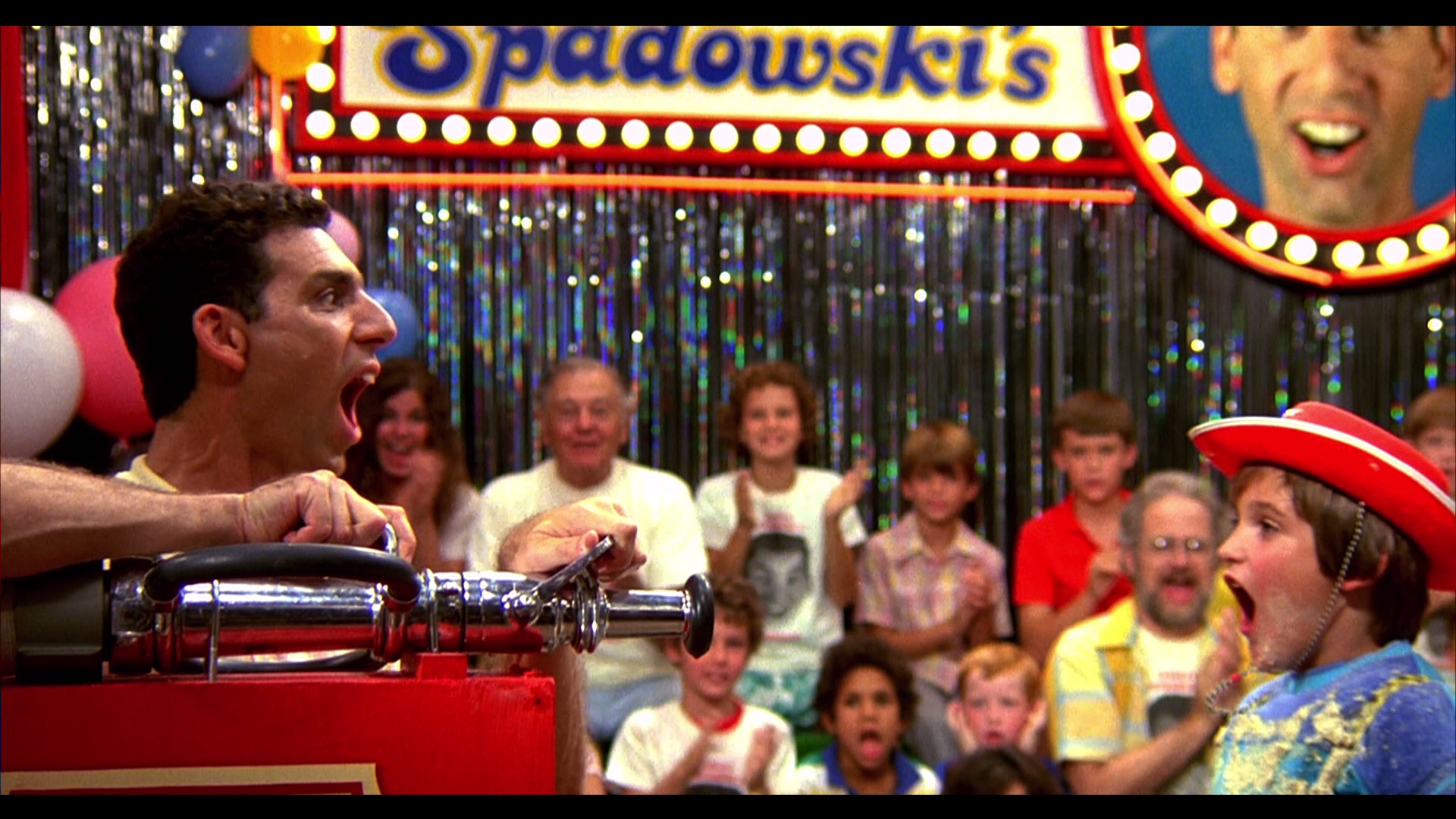 Twenty five years after crashing into theaters, Shout Factory pumps the film into HD for Blu-ray and results would have fared better… twenty five years ago. In the interest of fairness, UHF has been scanned at decent resolution. Fidelity gains over DVD are significant. Rather uninteresting cinematography benefits the piece with sharp close-ups and minimal tricks.

Faults lie in various processing kinks, notably a layer of edge enhancement. Halos are slim yet noticeable. Further trouble ensues with grain structure. While kept in place, sharpening causes an apparent uptick in thickness, leading to a barrage of compression problems. Grain appears less like a natural part of the film stock and more in line with noise. AVC work refuses to keep up.

Additional issues pop up with color saturation, glazing flesh tones with ugly orange hues while blowing out reds into extreme categories. Each frame becomes an assault of unnatural color, seemingly an attempt to give UHF some new life. In the end, it only appears to playing on a TV left uncalibrated at a big box retailer. Little attention has been given to the source print, leaving a plethora of dings, scratches, and marks visible. Restoration work is cheap and dirty.

Black levels are exceptional though. That turns into something worth noting. Of course, UHF naturally has a slew of VHS and fuzzy SD broadcast scenes to play with too, recounting bygone days of hazy TV watching. They’re nostalgia in motion.

PCM stereo shows off a touch, offering a pleasant spread of audio to the sides with frequency. An early scene in Al’s tattered apartment sonically follows the ambient karate class next door as the camera moves about. Spadowski’s show will heave and ho between speakers as needed. Plus, when you start drinking from the fire hose, water will splash into the sides.

Important is a preservation of fidelity. We have a winner. Low budget production work means dialog is usually imprecise with a touch of age. Remastering won’t fix anything. However, the disc’s audio is bright, clean, and tight. Al’s “Money for Nothing” parody, “The Beverly Hillbillies,” sounds great too. Instrument cues take their place in the sound field while using the dynamic range to punch it up.

Weird Al pops in a few of the bonuses, notably a commentary with director (and longtime Al video collaborator) Jay Levey. A behind-the-scenes feature is vintage, yet like the film itself, has actually matured into a strong parody of self-congratulatory extras. Deleted scenes play host to a few gems (Michael Richards continues his torrent of hilarity), with a full music video for “UHF” and some trailers running afterward.

Those, however, were from the DVD release. New to the 25th Anniversary edition is a 50-minute San Diego Comic Con panel obviously meant to sell discs, but still provides honest insight and entertainment value. Essential Al.