You’ll be wishing to watch this movie again

‘Directed, written, starring, and produced by Zach Braff.’ If that credits line is familiar, it’s in the midst of a flashback to 2004’s eccentric Garden State. Here, Braff returns to form with a film teetering on the brink of indie pretentiousness, but finds recovery in a charming and satisfying parable for life.

Wish I Was Here is small, infantile in scope even, yet focused on clear goals and perfect character development. Much of the film swirls around Braff, an out of work actor with two kids, a flailing Jewish faith, and a father diagnosed with cancer. Braff’s Bloom family, made up of Kate Hudson and the brilliant Mandy Patinkin, creates the surface for this work dealing with an early mid-life crisis. Yes, coming of age stories ignoring the tumultuous teenage years are possible. Braff just successfully made one.

At times somber and other times comedic, Wish I Was Here is a touch flamboyant and quirky – if “quirky” hasn’t extinguished itself from the glut of indie efforts trying to find this same tone. General oddities, specifically Braff’s sci-fi daydream flashbacks to his childhood, are a serviceable reflection on his thought process. They doubly serve as a reminder of his need to escape, which much of this film is leading toward.

Impressively, script work massages bit parts into full roles which some films twice the length won’t do. While certain players exists for their cameo power (Jim Parsons, Donald Faison), the rest are smartly inserted into necessary places. Kate Hudson becomes more than a supportive yet critical wife; she is built outward as she deals with inflammatory harassment at work and earns a place as the metaphorical bonding agent who keeps the family together while Aiden (Braff) deals with his father’s death. And the kids? They’re genuine personalities, from slightly off-kilter, drill-toting Tucker (Pierce Gagnon) to Grace (Joey King) whose teenage presumptuousness is beginning to sprout.

Through these defined (even mismatched) psyches, Wish I Was Here finds a balance, producing scene types meant to empower or inspire through hardship. In the simplest of terms, it’s just good. There is a tremendous amount of material to soak up, relax with, and enjoy. Final moments, which define cinematic tenderness, are as powerfully emotive as they are joyous. 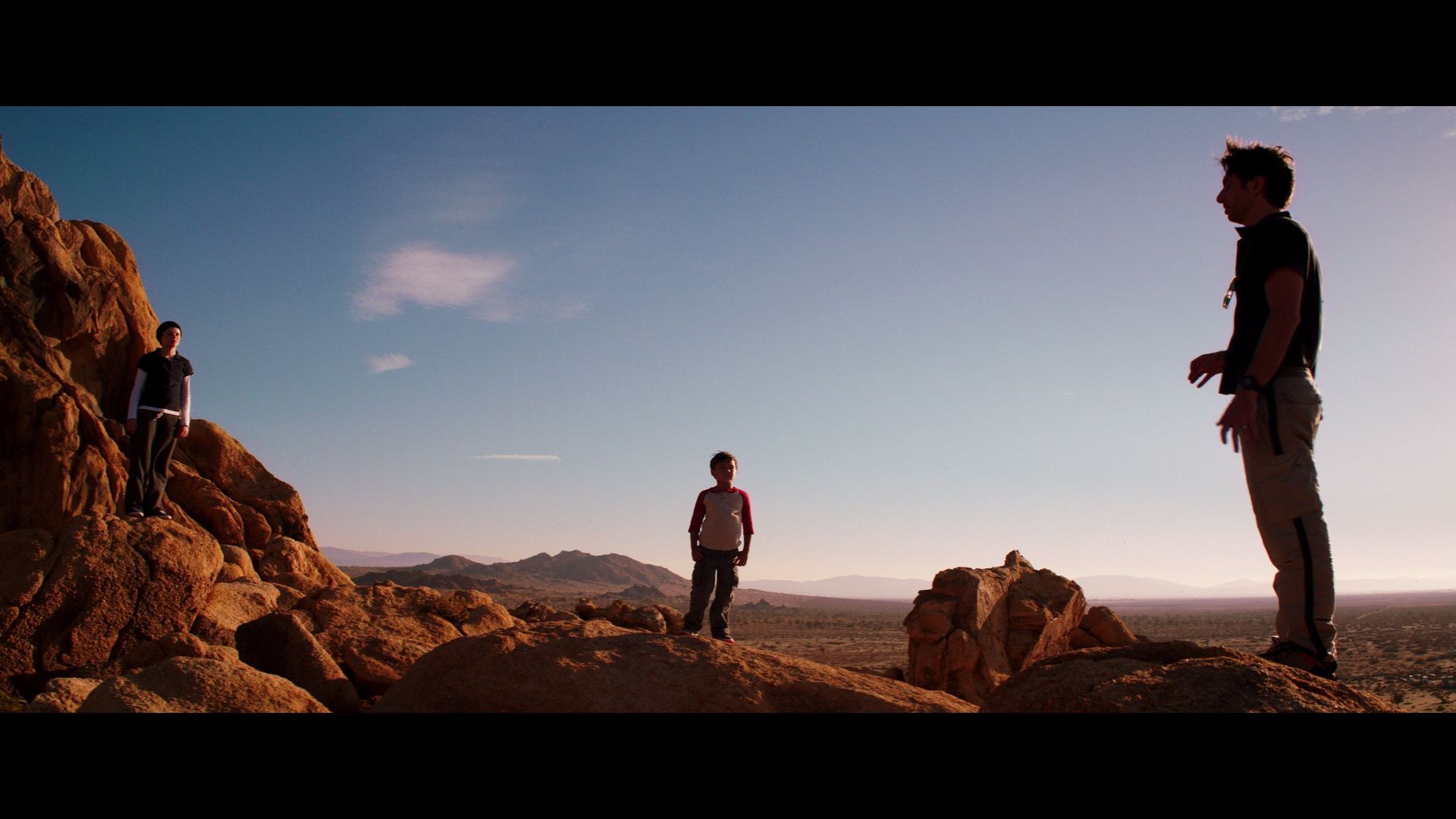 Shot with crowd funded cash, Wish I Was Here still manages to find a vivid look courtesy of cinematographer Lawrence Sher (another Garden State alum). Digitally captured, fidelity and contrast are easy rivals for film-based sources. Frequent close-ups are always consistent with dazzling detail, doubled in intensity when the camera pulls back for many Los Angeles exteriors.

Any tricks are played with color correction, usually playing in front a layer of warmth. Oranges and yellows are dominant, but not to an extent where they affect contrast. Within an office environment, the film shifts to a drastic bit of teal. These scenes are short, and mood is appropriately set.

Blacks levels are generous, distributing even depth to any scene which requires it. Likewise, sun lit contrast is extensive. Keeping the comedic tone, Wish I Was Here rarely deviates from a bright, cheery visual style.

Anomaly free, viewers won’t be subjected to any noise or aliasing. Images are stunningly clean and are created from a high resolution source. The sheer level of fidelity is a testament, and under these transfer conditions (with an encode from Universal that is absolutely invisible), Wish I Was Here’s beauty is allowed to breathe.

There is a bit of play in this otherwise routine DTS-HD 5.1 mix. Voices can split the fronts and an ocean side trailer which makes its way into the script is surrounded by ambiance. From seagulls to splashing waves and a small breeze, the location is fully sold. A few planes panning overhead won’t hurt either.

Some subtle uses exist too, including a school choir which captures the room acoustics with a full spread between channels. On the flip side, the disc is mostly centered dialog as is expected for the content. To not give the mixing work proper due, which does spread the sonic wealth, would be unfortunate.

Zach Braff is all over these extras, putting himself in the mix of two commentaries, one with his brother and co-writer Adam, with the other hosting director of photography Lawrence Sher and editor Myron Kerstein. Thirteen deleted scenes also offer commentary (optionally of course) and last almost 26-minutes. Directing While Acting is eight minutes of set clips which show Braff keeping control during the shots, and Scrubs fans will love the Donald Faison/Braff reunion during some outtakes between the two as they share a scene.