I, am not a Frankenstein fan nor thrilled over awkward commas

Kudos to the 666 demons dropped onto Earth by Satan and their gargoyle rivals for a thousand years of warring without ever alerting humans to their presence. This is in spite of a multi-block gargoyle cathedral plunged into the center of an unidentified Australian city and the mammoth corporate skyscraper in celebration of demon kind.

It is not shocking to see writer Kevin Grevioux’s name scattered in the credits. Grevioux is credited with the conceptual strength of Underworld, and appears to be of the type to stay singularly tracked creatively. I, Frankenstein is a hokier, dopier, and religiously bound schlocker without any sense of its own reality. At least Underworld tried to invest in human culture. I, Frankenstein can’t decide whether to stay in the technological barrens of late 1700s naivety or split into modern day trappings. In terms of plotting, it doesn’t matter.

After all, this is the movie which finds Aaron Eckhart playing a kung-fu imbued Frankenstein monster who knowingly inserts himself into the spiel of good/evil for the sake of storytelling. Both the angelic gargoyles and satanist, non-descript demons flush out their grievances in search of Dr. Frankenstein’s 200+ year old notebook, which remains in astonishing condition for its age.

Much like the book, Eckhart’s monster is equally mint, with peeled scars counteracting the film’s standard mythos of the creature being pieced together from multiple bodies. Apparently, the good doctor splurged on a satisfying brain and equalized musculature of a six bodybuilders for his electrical creation.

Fantasy sci-fi or not, happenings are routinely ridiculous and putrid in their conception. Bill Nighy pops in as leader of the demon horde, dangerously near to reconstructing his stint as Viktor in Underworld – if these comparisons weren’t already tripping over themselves. Nighy’s character breaks any pretense of logic, begging to sprout a thousands deep army of hellians with resurrection powers. He’s plotted this too: Each stilled member of his battalion is strapped to a machine built with an LCD readout to determine their “Re-animation” percentage. Would these screens be checked regularly? Can it not be seen if someone is being resurrected without them? In what circumstances would these screens be cost efficient?

I, Frankenstein razzles and dazzles superficially with an orange light show, all contrasted in pasty blue lights. Sparks and fire are flared up in spherical forms to coat the screen in tiresome choreography, as if producers wish the audience to ignore the haphazard build-up to these battles of weary martial arts. Opening scenes feel desperately truncated for pacing, but their lost information wouldn’t alleviate the struggles of this groaner. Even as the bloated, costly action escapade it wants to be, there is almost nothing in I, Frankenstein worthy of attention. 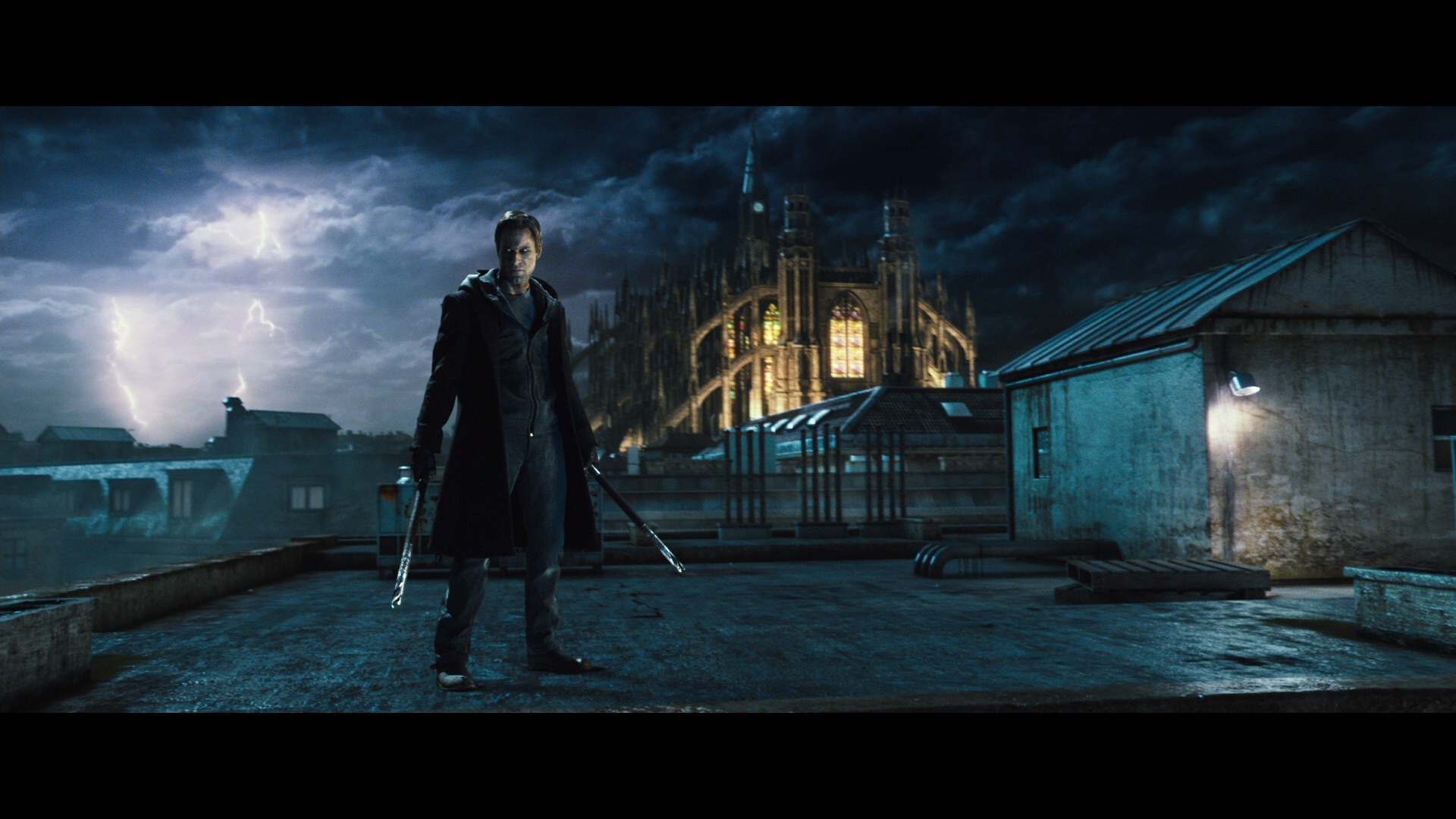 Lionsgate’s feature is ugly and not in the sense of its mere existence. I, Frankenstein is scoured by blues and oranges without so much as a slip of other primaries. It’s so boring, it even matches the Underworld series in a direct lift of aesthetics. Flashes of light pour from defeated creatures, merely additional shades of the same colors. You’ll find no relief here.

Even away from the aggravating trepidation of digital color grading, this Red Epic-lensed piece is poked by bothersome noise in its shadows with some frequency. While occasional moments of softened focus or loose processing are noted, the noise (and its consistency) is amongst the highest complaint.

Part of this seems pointed toward black levels which recede (like the rest of the color scheme) into blues. Rarely is this feature looking for true black, and even if/when it does, there remains the issue of flaccid density. Contrast is utterly pitiful unless searing whites are being used to blow up the warring factions. Encoding work in terms of the Blu-ray itself seems fine with most of the issues pushed back onto the source material as a best guess. Bitrates are high enough wherein those types of problems should not appear in the compression work..

Disregarding the rest, there remains enough fidelity in the images to satisfy. Close-ups displays facial definition and where applicable, the textural qualities of the physical make-up appliances (passe design work or not). Exteriors bleed special effects with little adherence to reality, and their resolution avoids any instances of aliasing.

This disc puts much of its muscle into the 3D effects, and it’s a surprise to learn this was all post conversion work. Director Stuart Beattie and cinematographer Ross Emery pair to shoot this as if 3D was always planned (it wasn’t). Accentuation in live action and many all-CG shots proves spectacular. Work here spites the darkness and establishes a base of dimensionality which betters the feature – if only a little bit.

Enhancement on the part of 3D work is frequent, and dialog scenes are well extended into the background. Foreground work here is held back, saving the heaviest thrusts for action scenes. There, sparks and flames rise up, and creatures dart into the lens to break the front plane. Kudos to the stereographers who pack in teeny elements like passing embers amidst thick action to make this a standout. Given the darkness, this should be a disc bleeding cross talk, and yet there is almost nothing here to break the space. It’s cautious enough to where even sensitive displays should handle it.

While a moment or two misplaced foley effects (some tapping fingernails come from entirely the wrong direction), everything else about this DTS-HD track is a winner. Thrusts of LFE bring on explosions, punches, and flapping wings with plenty of force. Trails of fire will catch and blossom in the low-end while they whip past the lens. By the end as a building enters a total collapse, the entire room swells with bass.

I, Frankenstein is a tricky mix too, requiring extensive caution in producing fight scenes. From pre-fight creaking wood to crackling pieces of demon parts, channels are given a suitable work out. There is an especially great concentration of sound inside of a warehouse where Eckhart takes on a foe with lead pipes. Their hollow echoes are superbly rendered as they hit, with the environment’s space completely sold to enhance the brawl.

Writer/director Stuart Beattie tackles a solo commentary with producers Gary Lucchesi & Richard Wright, effects supervisor James McQuaide, and actor/writer Kevin Grevioux providing a second. Creating a Monster is featurette one of two (13:00 on the nose) which focuses on make-up and design work. Frankenstein’s Creatures is the follow-up (14:18) which takes note of story and inspiration. They’re passable pieces. Some trailers remain.