No heart, no quarter, but plenty of explicitness. That’s Neighbors

Never squeamish or dodging the opportunity to hurt someone, Neighbors is appropriately vicious. Rogen and his on-screen wife Rose Byrne settle in for the quaint life of parenting until the disruptive, party hungry fraternity devises an all-out assault of unfiltered crassness. And noise… so much noise.

Neighbors is not a film of reality. A chunk of the script spends time filtering out possible solutions (loosely) so the extremes can quickly be executed. Most would leave this situation dead as they’re propelled through ceilings by prank airbags or ingest such tremendous levels of alcohol as to least end up in a coma. It’s raucous. It’s also college.

Spot-on funnymen producers-turned-scriptwriters Brendan O’Brien & Andrew J. Cohen slip from one scenario to another whether the anchors are there or not. Something like Neighbors won’t require much as the dueling sides enter into plots of one-upmanship, slaughtering reasonable logic and driving a middle finger through the center of good taste.

The film has energy. Threading through side characters and bit parts, Neighbors has endless idiocy to utilize when under pressure from a dry spell. Even miniature gags like a Robert De Niro party are generous for their brief appearances. If the film has any pretense of going too far, it’ll simply go further to ensure lines are crossed. By the end, police are assaulted and guns are shot off before the script work finds a way to comically normalize the situation with a sudden thrust of character closure. Turns out Neighbors had a plan all along. 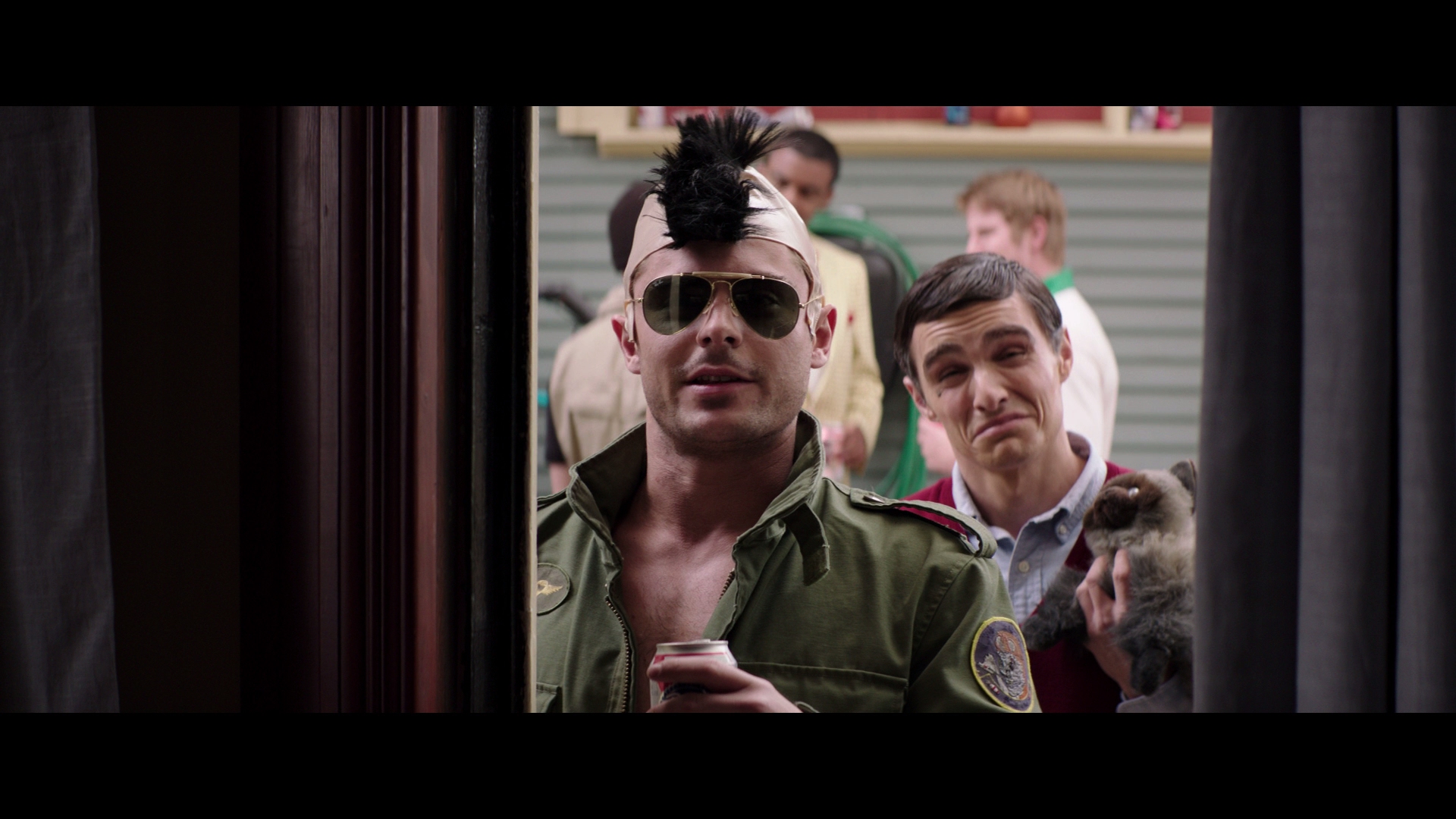 Produced on a budget and digitally shot, much of Neighbors is visually… well, present. Shards of fine fidelity and sharpness are there for the audience craving them with the rest wandering in perfect adequacy. Medium shots are pale, cinematography is passe, and focus has a drifting eye.

In the same area is color saturation which pulls the majority of its vibrancy from party lights – especially solid greens. Flesh tones feels mostly untouched and primaries are pure without much interference in post production. The warmth of the family home (with plenty of light streaming through the windows), chilliness of a cubicle-loaded office, and scattered hues of the frat house at least add some color décor.

Bonus points are given for keeping up with the contrast and delivering strong black levels. Depth is stable without an intrusion from noise, keeping images free of any distraction. Cleanliness is pure.

A hint of aliasing will make itself known on certain lines, namely a cap on the baby and additionally on some glasses which become a key plot point. The resulting flicker is just enough to be noticeable and minor enough wherein most people won’t even be bothered.

Sonic energy is consistently produced by the streams of loud party music. Neighbors is strong in replicating bass from a distance. Beats are solid even from across the yard and through the walls of Rogen’s home during late night party sessions. The effect feels totally natural, and the power when in the middle of these “gatherings” is exceptional. Same with surround use.

Neighbors has some tricks too with this DTS-HD track, including a video phone call which sends voices deep into the stereos, far from the center. A late display of fireworks is a blast (somewhat literally) as they’re launched with pleasing reverb.

While a commentary isn’t offered, you will find laughs. Ten deleted/extended scenes run nearly 13-minutes, and an additional alternate opening is given its own section. Line-o-rama, an ever popular addition, is given only a few minutes of adlib. The gag reel is where most of the raunchy laughs are anyway.

An Unlucky Pair is featurette number one, selling the Rogen/Efron pairing. Partying with the Neighbors discusses the family roles for a few minutes, and the vaguely titled On the Set With isn’t clear for a reason as it delves into the art of making penis prosthetics. Finally, there’s The Frat focusing on the characters who make up the Deltas.