Take a scary break with the Toy Story gang

Disney splurges on their named Toy Story stars for this whimsical little Halloween special, pulling together Tom Hanks, Tim Allen, and others within a a brisk 22-minute short. Played to the cliches and remnants of B-movie horror past, Toy Story of Terror proves comfortable if wounded by the length dictated by network television.

Writer/director Angus MacClane squeezes this one together tightly, managing to extract a bit of fresh character outside of what was established in the Toy Story Trilogy. Jessie’s (Joan Cusak) innate fear of being boxed up creates a theme which this short can readily exploit and build upon as the toys explore a seemingly innocent motel. At night. In the rain. With thunder. So yes, it’s a horror movie.

Terror only half executes the genre concept, splitting partway into a traditional mode of escape and introduction. Captured by the Motel manager for resale, the Toy Story crew bump into a new roster of side faces and Combat Carl, who was but a fleeting presence in the original film. Any child-friendly horror once the newbies are involved is accidental at best.

There are enough laughs to justify this short, particularly one sight gag involving a Pez dispenser. Nothing here feels truncated or cheap. Animation work – lighting in particular – is sublime. Putting Jessie as the central lead and heroine is also a break from the franchise’s core.

And sure, Terror exists to sell toys… and future films and commercial space and to keep the property fresh between releases. However, this is fresh, peppy entertainment for kids, plus technically adept enough to garner a pass for any intended corporate messaging. 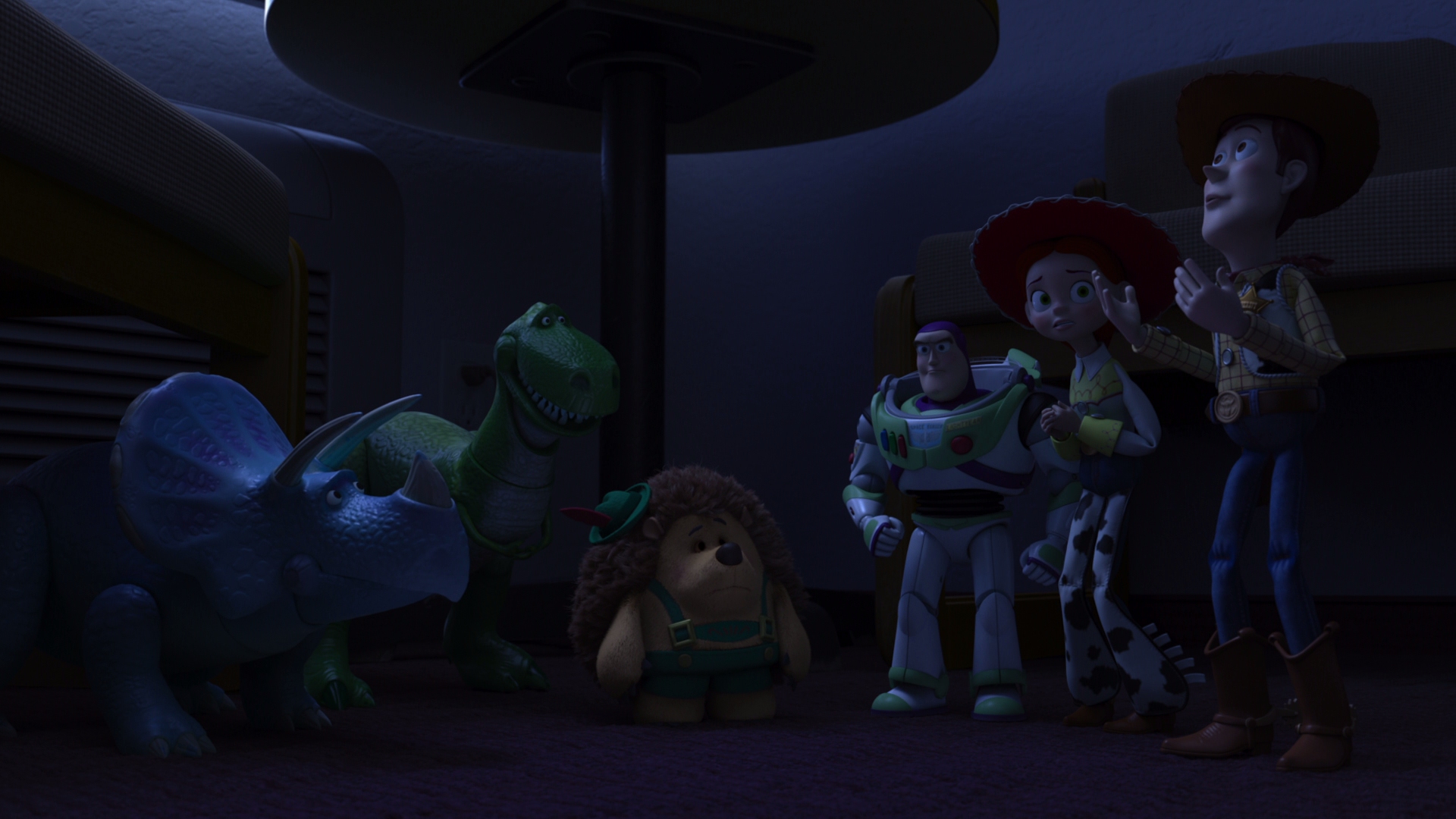 At 22-minutes, Disney doesn’t need a powerhouse AVC encode to deliver Toy Story of Terror, and provides it with over 5GB of space. Some feature length films are not so lucky anymore.

Splendid color equals itself to any of the main trilogy films, including outstanding saturation as Buzz slips into “glow in the dark” mode. This off-sets some droopy black levels in the underbelly of the motel, oddly an issue not noted elsewhere, although the excess presence of dust is a likely reason why.

Sharpness is exceptionally pure. Fidelity is primed to pop with plentiful textures and other design elements. One new toy wears cotton overalls with thick details, enough to show off stitching. At mid-range, they flicker slightly, but this is a tremendous level of work to stuff onto a 1080p frame.

Sound design is pressured into a 7.1 mold, feeling unnecessary given the constraints of television. Additional surrounds are mostly forgotten or ignored with rare exceptions, with most of the audio pushed into front stereo channels. Exteriors rush in with stormy conditions in the beginning frames, but this proves otherwise mundane.

Outside of thunder, LFE is dropped. A handful of false scares may add a touch of accentuation for effect, yet this barely registers. Still, the losses are meaningless considering the content. Channel separation may be dull (but it’s there) and up to par when in consideration of the format.

Main feature commentary duties are picked up by writer/director Angus MacClane, director of photography Ian Megibben, and editor Axel Geddes. Their conversation is varied given their perspectives, although gaps of silence in a 22-minute feature is odd.

Three shorts are available to soak up, each under 10-minutes and in full 7.1. Each also comes with their own commentaries. Team of Specialists takes time at 11-minutes to follow the day-to-day process of animation, with MacLane taking the lead. Three deleted scenes offer an intro from the editor, and a handful of vintage commercials can be viewed alone or along with Toy Story of Terror. They’re fun.