Outside of animation, comic book fans have never seen anything quite as good as this second season of Arrow. It is perfect superhero entertainment for the modern age, encapsulating a riveting cast of characters that draws on comic book lore, without getting mired in formula and genre conventions.

Arrow is the culmination of comic book properties finally coming into their own as serious television, after years of misses like Smallville that made it clear Hollywood had no interest in making direct adaptations of our favorite superheroes’ tales. True fans always knew that Hollywood never took superheroes seriously, often feeding them into goofy action constructs intended for children. After a solid first season, Arrow becomes the most fully realized superhero entertainment ever seen on television in this action-packed second season.

Oliver Queen (Stephen Amell in the role he was born to play) is the Arrow, a billionaire by day and arrow-toting vigilante by night, protecting his beloved Starling City. If it sounds similar to Batman’s story, you would not be wrong. Green Arrow has always been a vaguely derivative superhero from the much more popular Batman, which this show fully embraces without remorse. Taking cues from Nolan’s wildly popular Dark Knight trilogy of films and the Jason Bourne film franchise, this version of the Emerald Archer liberally borrows from Batman’s mythos. It gives Oliver his own support team, including beloved supporting character Felicity (Emily Rickards) and personal bodyguard John Diggle (David Ramsey). Felicity injects a much needed dose of levity into an otherwise serious show. This season expands the cast, bringing in Laurel’s sister Sara (Caity Lotz) in a vital role. Comic book fans will go crazy when Sara shows up in costume.

There is so much story in season two that a review this brief simply can’t replicate the elaborate plot without giving away massive spoilers. It contains more surprising moments than any other show in the past year, including a few romantic twists that will leave viewers gasping for breath. Starling City is still recovering from the devastating fallout of last season when Slade Wilson shows up as a thorn in Oliver’s side, both to Oliver’s civilian identity and as the Arrow. It is the showdown Arrow’s fans have been waiting for since the villain’s mask first made an appearance in season one.

A true comic book hero needs an arch-nemesis and Arrow has the menacing Deathstroke, one of the most intimidating super-villains in DC Comics’ deep stable of baddies. Season two is all about the conflict between Slade Wilson and Oliver Queen, one-time friends until Slade became delusional and turned his animosity towards Oliver. Back on the island where Slade honed Oliver’s skills before his days as the Arrow, Slade was injected with an experimental serum that gave him super-strength, turning him into the killing machine known as Deathstroke.

Arrow features some of the tightest plotting on network television, weaving multiple running storylines at the same time, while keeping each episode fresh and exciting. It’s a true accomplishment in this day and age. Comic book fans will become excited over its many nods to the character’s four-color origins, including appearances by the Suicide Squad, Huntress, and League of Assassins. They will go into ecstatic shock when the fastest man alive, Barry Allen aka the Flash, receives his introduction and origin story. The Flash proved so popular in his brief outing, he was given his own television show. Many iconic DC comic book references are peppered throughout the season, though they never feel gratuitous or unnecessary. Arrow is a show that can be enjoyed by hardcore fans and casual viewers alike.

From the first episodes of season two, Arrow provides unrelenting action in the most authentic manner possible, featuring an incredible cast in smartly-written stories. Caity Lotz adds a remarkable dynamic to the show as Sara, the former party girl turned League of Assassins member. I do not think she was intended to be Oliver’s love interest when they first cast her, but she has developed a huge fan following and truly became an essential part of Arrow by season’s end.

Arrow has become one of the best shows on television, going far beyond its initial limitations as a glossy CW series. After shying away from fully embracing the character’s roots in season one, the series dives head first into DC’s rich history, rarely making mistakes along the way. Arrow’s devastating combination of awesome superhero action and rich storytelling make it must-see television on a weekly basis. It deserves an Emmy, if there was any justice to those awards. This is bold network television while staying completely true to Arrow’s comic book origins. 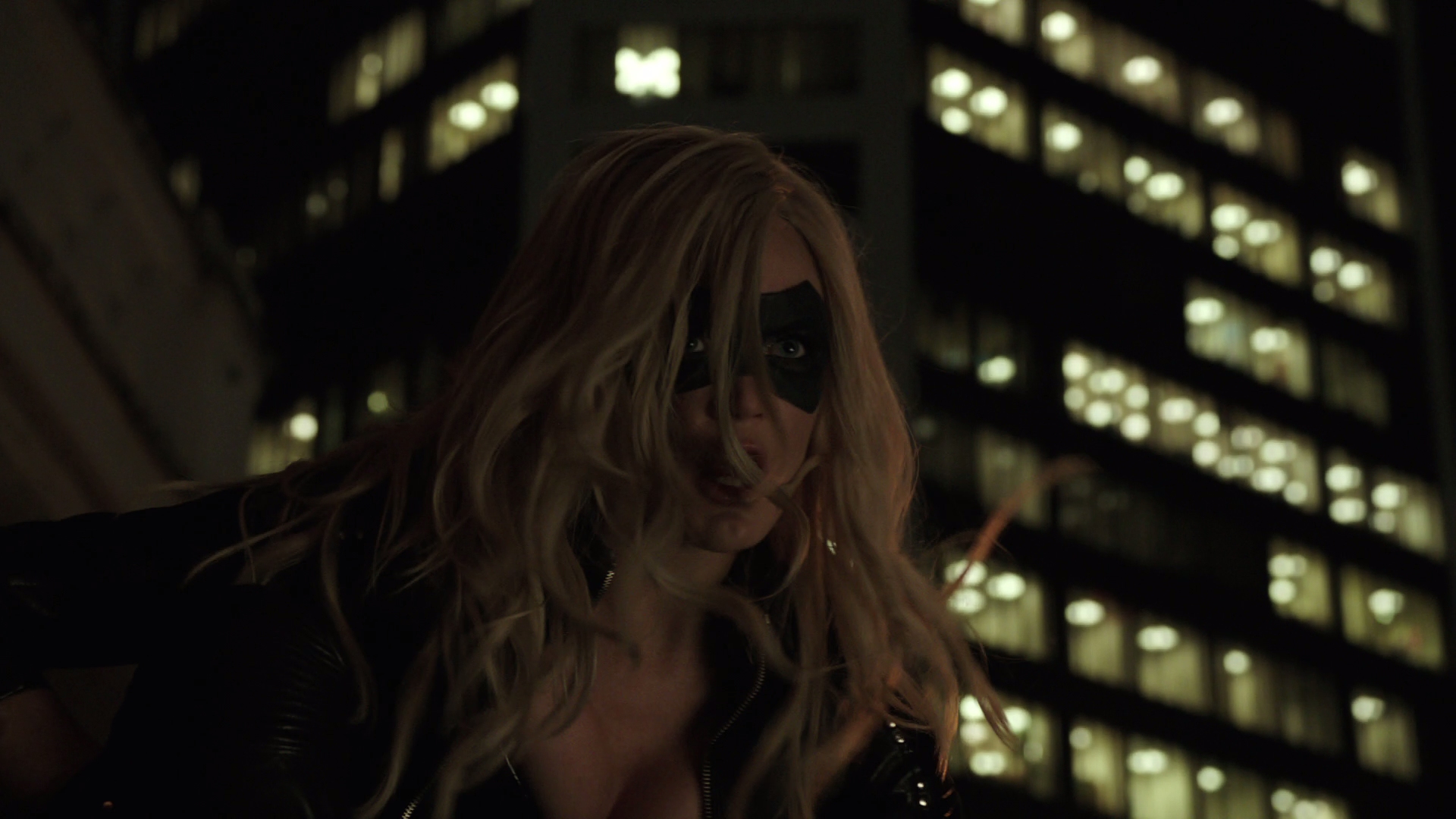 Arrow arrives on Blu-ray in a satisfactory 1080P presentation, framed in its native 1.78:1 aspect ratio. The show has never been a videophile’s delight, filled with gritty texture and fairly average levels of detail. Produced by Warner Bros. for the CW network, it shares many common characteristics with other recent television releases by that studio. This was a long season with 23 thrilling episodes. They are spread evenly over four BD-50s, which leads to rather low compression parameters. A typical episode’s AVC video encode only averages 15 Mbps, leading to reduced clarity and occasional artifacts.

The action is shrouded in dense, dark cinematography, a conscious effort to strike the right mood for Arrow’s adventures. The scenes set around Oliver’s civilian identity produce much better definition, sharpness, and contrast. This transfer has not been overly processed in post, there are no obvious indicators it has been filtered or sharpened. A few digital seams stick out with all of the composites and green screen work, but its CGI is largely effective in rendering a big-budget atmosphere on a television budget.

This is not stunning video on Blu-ray but certainly reproduces the average-looking broadcasts of Arrow on the CW. I’m not sure how much of the occasionally poor shadow delineation is due to intent; the AVC encode has a tough time handling the darkest scenes without introducing noise. It is not a flawless, pristine product. Arrow looks far poorer on DVD, bending to that format’s limited capacity to handle tough material.

An essential element to Arrow is its terrific 5.1 DTS-HD MA soundtrack. The action-heavy series has everything going on in its surround channels with an active bass presence. While a notch behind theatrical soundtracks, each episode delivers a variety of impressive sonic immersion across a deep soundstage. Precise dialogue is cleanly delivered in a well-balanced mix with the score. Yes, Arrow does emulate Christopher Nolan’s Batman by modulating Oliver’s voice whenever he’s in costume. I find Arrow’s effect a much better way to hide his secret identity – they back off from the frequently parodied Bat voice.

I would have loved a commentary or two from one of the stars, but this BD set contains some interesting featurettes. The combo set includes the entire season on five DVDs and a full UltraViolet code, redeemable in HDX on Flixster or VUDU. The standard retail packaging comes in an unremarkable slipbox. I highly recommend hunting down the Best Buy retail exclusive with its spectacular lenticular slipcover. Everything included, this is a fantastic value proposition and a real treat for its fans.

2013 Comic-Con Panel (26:10 in HD) – The primary cast answer questions and have fun in this panel discussion, taken before season two had aired. I usually like these type of panels, as the actors hang loose in front of a crowd and know they are putting on a show for fans.

Bonus Recap Episode: Year One (41:28 in HD) – Arrow is a show that is highly serialized, having been building a deep background for Oliver since episode one of last season. This breezy recap aired on the CW and used clips from season one to recap most of the key events from season one. It’s great for those people that want to dive into season two in a hurry, though watching season one is better.

From Vigilante To Hero (24:12 in HD) – A very well-made featurette, interviewing cast and crew about the Arrow’s maturation into hero. It’s interesting to hear Stephen Amell’s thoughts on the change, as Oliver began his superhero career as more of an anti-hero in season one. One develops an appreciation for how much thought was put into this show by its producers.

How Did They Do That? The Visual Effects of Arrow (11:17 in HD) – The opening of season two is explored as the VFX team goes over how key visual effects were brought to life.

Wirework: The Impossible Moves of Arrow (09:43 in HD) – Arrow has the best stunt action on television, doing things that are redefining how superheroes should move on screen. Comic-book action has never looked better than on Arrow and this featurette goes behind the scenes, interviewing production crew like the stunt coordinator and lead actors like Caity Lotz on their roles in creating the physically impossible action.

Gag Reel (04:44 in HD) – Standard outtakes and flubs by the primary stars.

Unaired Scenes (10 episodes in HD) – Ten different episodes include deleted scenes. None of them are incredibly long, often lasting no more than a minute or two. I got the feeling these were inconsequential scenes cut for time.