Credit goes to the ever deepening Marvel saga for finding a way to continually produce lavish, even innovative action set-ups ten core films into this media mash-up. Captain America’s follow through, free from the restraints of origin stories, is an absolute thriller – figuratively and literally. Winter Soldier is indebted to political, CIA story twisters as much as it is to mammoth blockbusters, unusually smart and intertwined into contemporary fears.

In-film campaign pandering or not, Winter Soldier is in perpetual motion, beginning with a classy infiltration sequence and vicious fight choreography. There’s a lot of that here, including gratuitous gunfire from villain lackeys who can’t aim, but also those bullet penetrations which skirt the edges of a PG-13. As always, it’s okay to be shot, but not bleed. Winter Soldier is willing to utilize such a restriction to extremes.

Returning writers Stephen McFeely and Christopher Markus create a complex narrative, probably the richest so far of this entire cycle. Characters slip in and out without feeling under nourished in terms of screen time or development, with Robert Redford stealing much of the deviousness as a politician. If anything wavers, it’s the Winter Soldier himself, a partially bionic experiment who exists as the over indulgent “worst case scenario” for all of these motivated fears about governmental oversight. He’s a cliché whose reality serves to fit an emotional core into the third act.

Oddly, Winter Soldier is amongst the leanest in terms of comedic value. One liners and sarcasm are dribbled about but muted, even reasonable given the tonal qualities. Yet, it remains tremendous entertainment and picking up on the bevy of character swerves, twists, and other complexities demands repeat viewings. Plus, Winter Soldier’s junction point with future films is refreshingly dulled. It feels stand alone, and thus doesn’t draw the ire of why the Avengers as a team are not stepping up to save 20 million people from assassination. They don’t need to because Captain America can hold this one on his own. 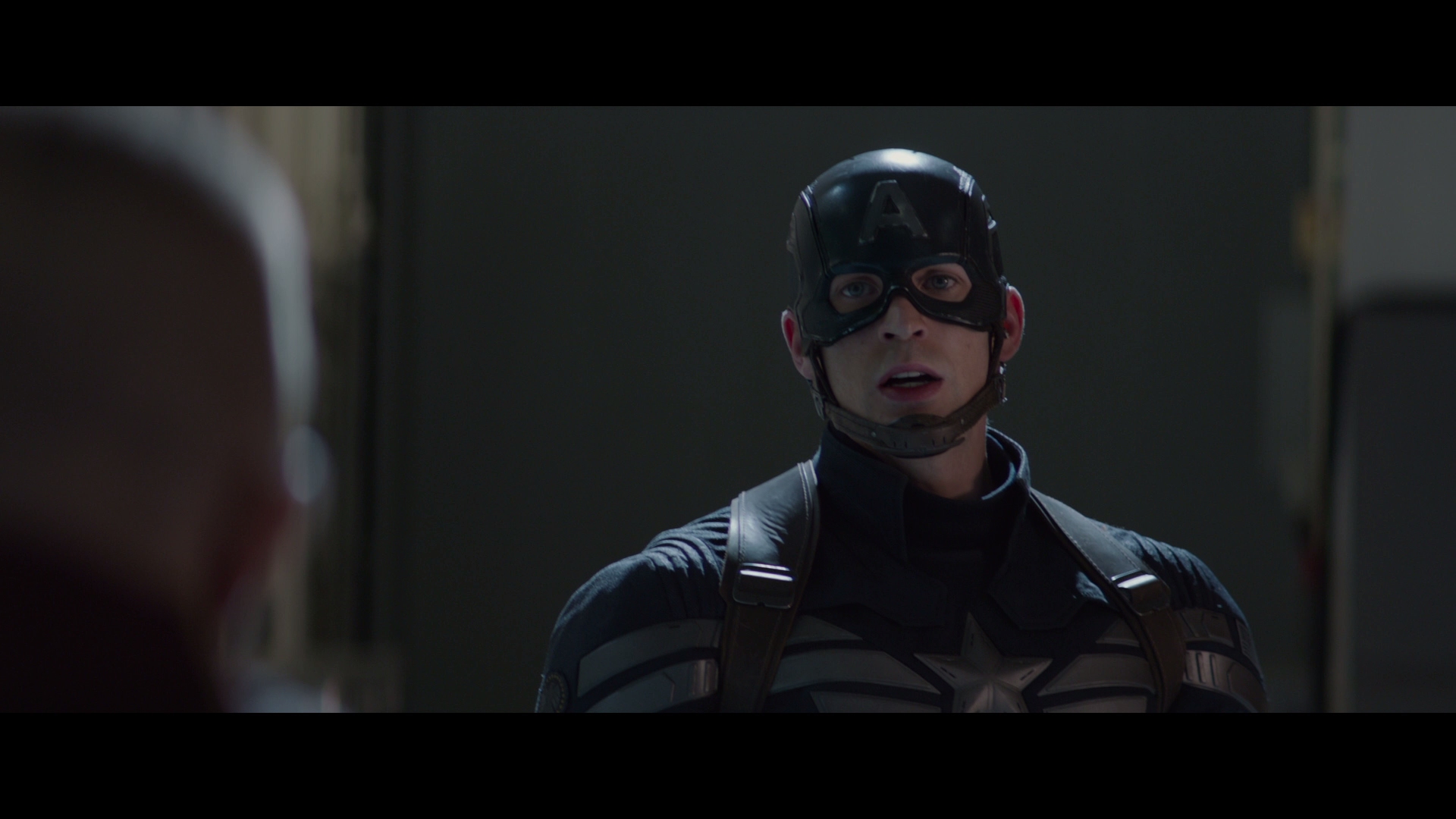 Fitting the mood, this Captain America sequel isn’t drowning in reds or blues. Instead, saturation is pulled back. Primaries are dulled and flesh tones flatten out to an overlay of weakening gray. Even with a ferocious contrast and well considered black levels at times, depth tends to meander. America’s colors do little shining here by design. That goes for interiors (sometimes fitted with dense yellows) or exteriors (bursting with contrasting whites and warmth) equally.

Dual digital cameras power this feature, a somewhat softened feature but ultimately too detailed to actually care. Close-ups are densely textured and winding effects shots with rows of warships are stunning. Their texture work is immense and on full display within this disc’s encoding. In 2D, you’ll find no issues with aliasing and action scenes, for all of their intense pans or rapid cut-aways, are never a bother. Disney’s AVC compression remains impeccable every time they send something to retail.

Grandiose destruction and towering explosions create a reference worthy finale regardless of any personal squabbles with post-production color correction. Apparent resolution reaches a peak held for this CG spectacle and those moments where a medium shot seems to lose itself in-lens are replaced by the awe-inspiring sights people build home theaters for. It’s visually fun, and in-line stylistically with Marvel films as a whole.

Then there’s post conversion 3D which adds some problems in addition to not being so rich in depth. Key to the concerning side is aliasing, strong during a scene which has Nick Fury showing Captain America a fleet build in progress. Some cars and other lines also mirror this stair-stepping. Otherwise, the visual space is the same in terms of color, blacks, and contrast.

However, it becomes clear that directors Anthony and Joe Russo hardly considered the space. Few sequences are built for this format. Until the closing action which sees Falcon (Anthony Mackie) dodging missiles, it becomes hard to detect this 3D format as adding anything. Conversations rarely stretch deep into the background and fight scenes are usually taking a direct/side view angle as opposed to delivering lunges toward the lens. While Winter Soldier does not succumb to gimmickry, it’s not worth putting on the glasses either.

Besides, in this case, 3D is non-essential – the richness of the DTS-HD 7.1 audio track is enough to create a sense of depth. As probably expected, every action set piece has generous highlights to offer. Winter Soldier does a marvelous job of separating cheaper mixes from this premium Hollywood design. While B-level tracks may work to showcase bullet pings, Disney’s efforts (and money no doubt) crafts a fully active field of sound. Glass and scattered debris are frequent visitors to the surrounds. Collapsing buildings extend into overtime to best layer rubble onto the actors.

Certain moments allow this mix to be punishing on the low-end, from close-up grenade explosions to missile strikes, anti-air fire, cars flipping, and assault rifle accentuation. LFE is tight and cleanly applied in varying volumes to best suit the scenes as needed. Dynamic range feels full without exceeding comfort levels.

A four person commentary pulls together the directing Russo Brothers with screenwriters Stephen McFeely and Christopher Markus to chat about their work. Featurettes slip into a mundane existence, beginning with On the Front Line which spends 10-minutes on tone and style. Cut the Check is an Anthony Mackie promo, and Steve Rogers’ Notebook looks at how a certain scene made the film a better fit for international audiences. Four deleted scenes have commentary and a gag reel is enjoyable for a few minutes.