A return to form for this popular CW offering

Few shows make it to nine seasons. Sam and Dean Winchester have literally done it all in the popular CW series, going to Hell and back as they save the world from whatever latest apocalypse threatens the planet. Thousands of angels have now been booted from Heaven, running around Earth unchecked by a higher authority. Season nine of Supernatural feels like a huge return to form for the venerable genre series, hearkening back to its roots. After series creator Eric Kripke finished his planned story of the brothers after five strong seasons, Supernatural stumbled along for a couple of seasons. Season nine is probably the strongest season since Supernatural’s classic years, featuring a back-to-basics approach touching on its best elements.

Castiel (Misha Collins) begins the season having lost his angelic grace, becoming a mortal human. The show has worked much better since the popular angel was made a permanent cast member. He’s been a fan favorite since his first appearances, due to Misha Collins’ disarming performance as a powerful angel out of place in a human world. Castiel attempts to live life as an ordinary man, despite newly-arrived angels to Earth still looking up to their former boss for guidance. Castiel’s development in season nine is one of the big reasons why the show feels like it is back on track.

As the season begins, Sam is still gravely wounded from last season’s trials. The doctors tell Dean that Sam is dying, which the older brother can’t accept. Out of options, Dean reaches out to any angel that will answer his prayers. Striking a deal with the angel Ezekiel (Tahmoh Penikett), Sam’s body plays host to Ezekiel while it heals. Dean is fully aware it is a sketchy deal, but he’s willing to do anything to save Sam’s life. Dean also decides to keep Sam in the dark about his pact with Ezekiel, knowing that Sam would not have made it. That tension between the brothers drives all of season nine, as we see the first serious rift between them in a long time.

It wouldn’t be Supernatural without its big, bad villains. The angel Metatron (Curtis Armstrong) returns with plans of his own, controlling his own army of angels. The former King of Hell, Crowley, has been booted out of power and is forced to ally with the Winchesters. This is a long season with many twists and turns, as enemies become friends and allies turn traitor. Felicia Day makes her now customary guest-shot per season in a very fun episode about LARPing. Not everything in season nine completely clicks. A failed episode titled Bloodlines is a thinly-veiled backdoor pilot for another show, which goes nowhere and should be skipped over by most fans.

Supernatural has always balanced the demands between serialized storytelling and single-episode narratives very well. You don’t need to know that much about the overall arc to pick up and enjoy an occasional episode, despite richly rewarding more devoted viewers with an engaging arc. Supernatural also has a ton of fun along the way, grounded in its brand of Rock-infused monster mayhem. Its humor, action, and familiar characters are all here once more, as Sam and Dean fight to head off a demon insurrection in Hell and reopen the gates of Heaven. 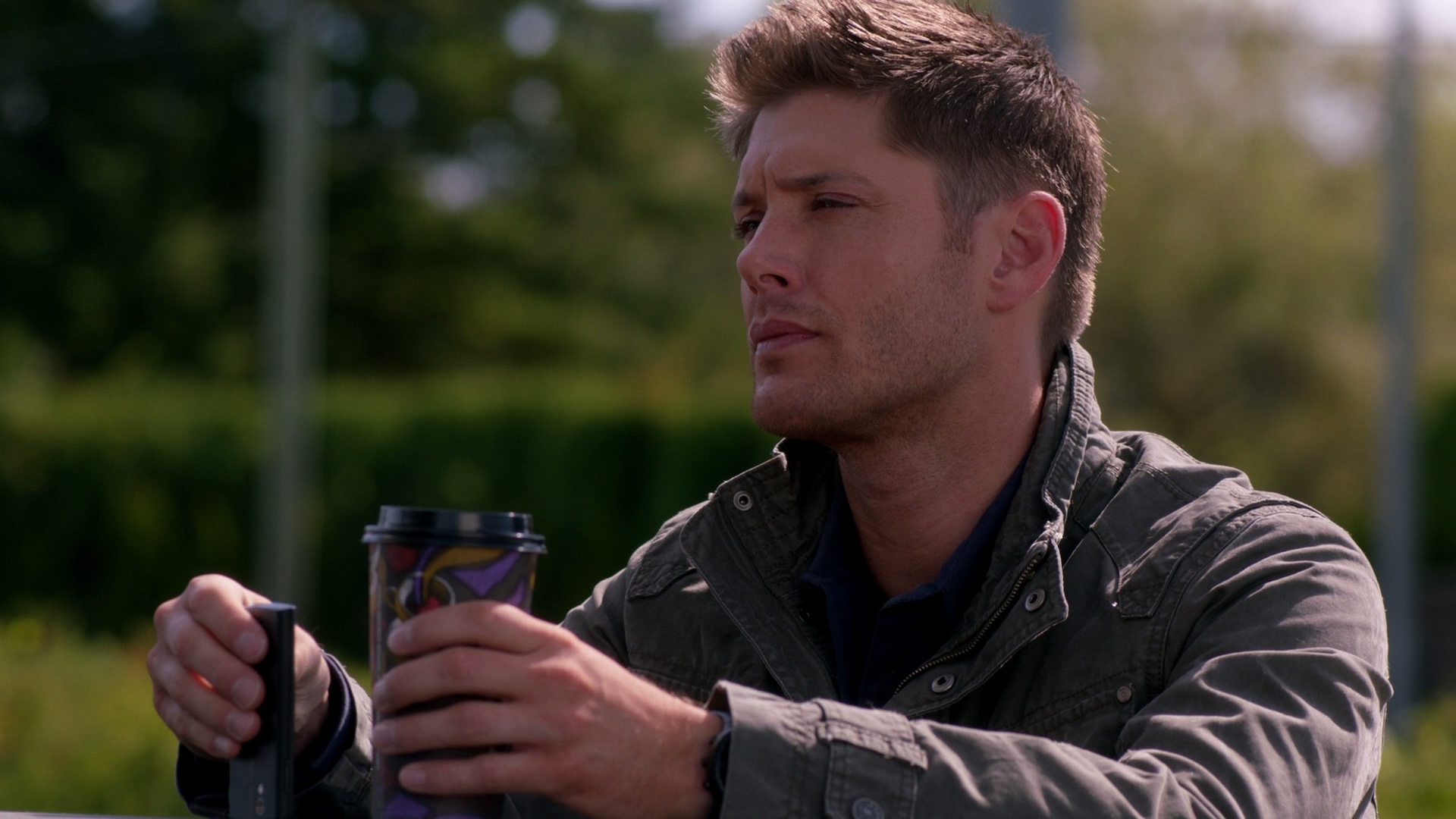 Season nine of Supernatural has 23 episodes, spread out over four BD-50s. Encoded in AVC at lowish video bitrates by WB, this is an adequate Hi-Def presentation of a television production with occasionally erratic digital cinematography. The typical episode averages 15 Mbps for the video. It looks great when reproducing perfectly-shot exteriors and has a harder time coping with Supernatural’s murkier material.

Supernatural has always had a distinct aesthetic, set in a dark world. The FX and CGI have always been darker, a largely natural fit for all the demons and monsters found in its universe. Exteriors have always had a clean, crisp feel with excellent definition and sharpness. While not quite reference caliber, those scenes have always exuded nice clarity. Darker interiors are another matter, rendering muddy shadow delineation and fairly weak shadow detail. The AVC video encode struggles in some of the darkest scenes with banding and macroblocking. It is the one fault in this otherwise solid video presentation.

Supernatural is framed in a 1.78:1 widescreen transfer at 1080P resolution. Having watched the season on the CW as well, this Blu-ray closely replicates that experience.

One of the more important elements in Supernatural has been its prolific use of older hard Rock music, favored by the Winchesters and particularly Dean. The raucous soundtrack gets a stellar 5.1 DTS-HD MA surround mix. The rockin’ affair has crystal-clear dialogue and spreads its musical interludes over the entire soundstage, pumping up your home theater. There is a smattering of distinct surround cues, though it is more effectively used as ambiance than intense directional sound. It does feature fantastic panning on occasion and some heavy midbass.

Warner Bros. has definitely included more special features than is the norm these days, though they have not included DVD versions for those people stuck watching that inferior format. It’s a great set of bonuses, including a mockumentary starring Misha Collins. The included UltraViolet digital copy redeems in HDX on VUDU or Flixster. Season nine comes in a shiny, holofoil slipcase with a fairly extensive episode guide inside the case. It’s a very slim package that holds all four discs.

The menus are ambitious for a Blu-ray set in 2014. Including the entire season’s special features on each disc’s menu was probably overkill and proved a bit frustrating. One thing I will point out is that it includes the teasers before each episode, a nice touch since most fans consider them a part of the episodes.

2013 Comic-Con Panel (28:51 in HD) – This was shot at Comic-Con before the season aired, so it makes sense to watch before viewing. Look for a surprise guest appearance, on top of the entire main cast answering fans’ questions. The cast seems to enjoy messing with one another and you get a feel of what these people look like without professional make-up crews.

Behind The Scenes of Supernatural: A Fan’s Perspective (18:26 in HD) – This is a fun featurette highlighting the day of a contest winner that got to tag along with Misha Collins for a day on the set. It is really a hilarious mockumentary, intended to spoof Supernatural’s actors behind the scenes. The entire cast is in on it and we get a long glimpse into on-set life.

Men of Letters: The Winchesters’ Legacy (15:40 in HD) – The history and background on the Men of Letters, the organization that Sam and Dean’s ancestors were members. It does utilize a lot of clips and highlights, though writers and producers fill in the more important stuff.

Designing The Men of Letters Bunker (09:19 in HD) – Production designer Jerry Wanek goes over his intentions when he constructed the brothers’ new digs.

Bound By Blood: Decisions and Consequences (21:12 in HD) – This is a longer featurette covering the major themes and plot points of season nine. Featuring the occasional soundbite from a cast member, but more often than not includes writers and producers explaining important details.

Unaired Scenes (All in HD) – By my count, nine different episodes have the option to view unaired scenes. None of them are particularly long or memorable; most seem to have been cut from broadcast for time. Viewing them is a bit of a chore, as they are not edited back into the episodes. You have to pick them from the main menu of each disc.

3 Audio Commentaries – Different commentators discuss Blade Runner, Mother’s Little Helper, and Bloodlines. The highlight is clearly the commentary by Misha Collins on Mother’s Little Helper, the episode he directed. He’s loose and has fun with it. Curiously, the failed backdoor pilot episode is given a commentary. It’s a dry discussion by showrunner Jeremy Carver and producer Bobby Singer.