Person of Interest’s third season is its most ambitious yet, expanding the show’s mythology and cast of characters. One of television’s smartest programs deals with increasingly complex themes of omniscient governmental surveillance and dueling computer intelligences. What keeps the show grounded are its unique characters, some of them larger than life. Person of Interest nominally started out as a show about Reese (Jim Caviezel), the heroic former spy operative. Season three makes clear its real center is the Machine, the powerful computer intelligence designed by Finch (Michael Emerson) for the government.

Person Of Interest maintains its high standards of writing and acting in season three, evolving into some of the best serialized storytelling seen on network television. Wrapped in a sleek action and mystery exterior, this is not a show one can simply pick up on a whim. The shifting alliances and murky backstory have been slowly revealed over the course of three seasons, hitting a stunning climax as season three ends.

What makes Person of Interest so fun is the elaborate mythology and background that has been so intricately laid out. Creator Jonathan Nolan took a page from his brother’s work on the Dark Knight trilogy of films and fashioned Reese into a suit-wearing, gun-blazing version of Batman without the costume. Much of this series feels like a re-invention of modern heroics. Even Root (Amy Acker), the wacky new character with a direct pipeline to the Machine, has abilities far beyond normal limitations. Her access to an all-seeing computer has its perks. Shaw (Sarah Shahi) is added to Finch’s team of operatives, a woman as capable as Reese in taking down the bad guys. Detectives Carter and Fusco provide the necessary police support, making some of Finch’s plans more believable.

Season three did turn some people off, especially the handling of Root and her increasing importance to the overall storyline. She is often used by the writers as a Deus ex machina device when the group gets into an impossible situation, such as when they fight with Vigilance, the gang of cyber-terrorists hoping to blow the lid off the government’s plans. She is an integral part of the show and it is hard to imagine season three without her. The other big thing about season three which stands out is the shocking death of a long-standing character in the middle of the season. Creator Jonathan Nolan claims he didn’t want to play it safe, so killing off such a familiar character was a way to stun the audience.

Some network shows play it safe, treading the same formula year after year. Person of Interest is that rare procedural which has grown into something wondrous as a deeply complex, serialized drama with a perfect dose of action and suspense. Featuring a host of memorable characters in consistently tight scripts, season three ups the ante with better action and a new threat, Samaritan. I shall leave it to the reader in discovering the true threat Samaritan poses to our beloved gang of heroes. 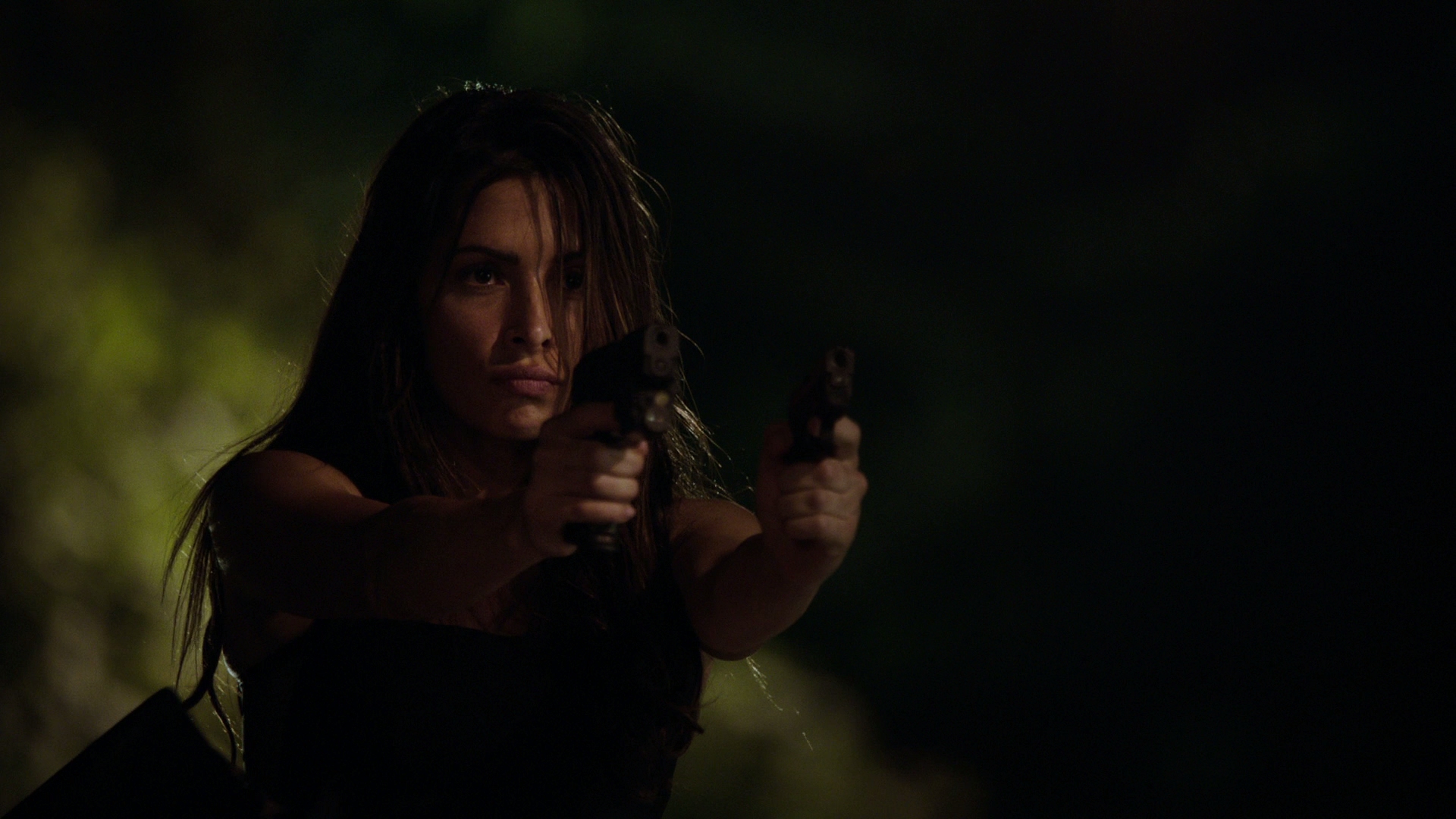 Person of Interest looks a little better on Blu-ray than it did for broadcast, though the show lacks the visual appeal and pop of theatrical fare. Its crisp look includes solid definition in a reasonably-sharp manner, though the lack of ultra-fine detail indicates some possible video processing. This has a dark, flat color palette suited for its urban environment. An even contrast and inky black levels help build a consistent tone. This 1080P resolution video is not flawless, some shots are unexpectedly soft. Blu-ray watchers have become too jaded when video quality of this level can be dismissed as ordinary.

One wonders if the below-average compression parameters led to some of the noted softness and waxy detail. The average episode is encoded in AVC at suspect bitrate levels, often below 16 Mbps. The digital video has more texture and noise than brighter television content on Blu-ray, often due to its darker scenes. There are no overt macroblocking artifacts, the newer AVC encoders rarely fail in that way. Most will likely be satisfied, the presentation retains a high degree of clarity and its exteriors exude palpable depth and dimension.

The 23 episodes of season three are spread over 4 BD-50s, though WB fits as many as six episodes each on the first few discs. This is a case where one more BD would have eased some of my concerns about proper compression rates.

The 5.1 DTS-HD MA soundtrack provides a rich sonic experience for television content. Person of Interest is an action show at its core and practically every episode features Reese or Shaw in a gunfight. Modern fidelity and a tasteful musical score deliver a vivid surround experience with some thump. Intelligible dialogue is presented in clean balance with the active surround channels. So prepare for some pulse-pounding excitement from your home theater system.

This is an interesting set of special features, particularly the relatively lengthy discussion by the production staff about A.I. The combo set includes the season on six DVDs and an UltraViolet digital copy redeemable on either VUDU or Flixster. This is a weighty set wrapped in a cardboard slipcase, perfect for convenient transport.

Person of Interest: A.I. (26:02 in HD) – This is an interwoven documentary of two different roundtable discussions by some of the crew, including creator Jonathan Nolan. It touches on a number of theoretical issues in A.I. that affect the show’s storylines. This piece feels drastically different in tone than most PR fluff found on special features, including a couple of outsiders working in A.I. as guests.

2013 Comic-Con Panel (25:02 in HD) – The cast and showrunners run a loose Q-and-A session at Comic Con. These are always fun since the actors loosen up. You never really learn too much about the show but it’s nice seeing the actors having fun with the audience and other cast members.

Saying Goodbye To A Friend (06:16 in HD) – Watch this after the season, as it explores the shocking death of one character in explicit detail. Apparently secrecy was so high for the fatal scene, six different takes were shot to keep the identity hidden from the press.

Season Finale Commentary – Michael Emerson (Finch) handles this solo commentary. He is infinitely polite and a bit dry, sometimes calling out the actors and giving us little details about them. It’s not a particularly fun discussion as he seems tight discussing some topics.