Jarhead 2 dedicates time to gunfire montages. Jake Gyllenhaal never fired a round in the original Jarhead. That was the point.

The veins of Jarhead remain, although they do so as a limited peering into the psyche of Marine Corps soldiers swarmed in Taliban-held territory. However, this in-name-only sequel is less about the grind, pressures, and alluring promises hoisted upon our youngest recruits than it is a tale of sagging heroism mingling with bullet fed patriotism.

Mostly ignoring the mental toll, that which made Jarhead a captivating and purposeful non-spectacle, is egregious. Spinning into recruitment video level jingoism is an outright bastardization of the concept.

What’s left for Don Michael Paul to direct is spit out from studio lines. Universal demanded a war movie soaked in blood squibs more than internal turmoil. In that sense, Jarhead 2, in spite of heinous bro chatter dialog, is a drooping if effective war drama. Josh Kelley swoops in to take over an available Corporal post as Merrimette, chugging down orders from Stephen Lang whose gruffness is ever apparent.

Story construction abandons Merrimette and his crew in hostile Taliban country after a roadside attack, leading into a series of exchanges with Afghan rebels meant to pucker up this material for a wider audience. It’s a typical application of contemporary cinematic militarism, stuffed with sacrifice and bravery without any context.

Jarhead 2 slinks past any potential flare ups of boredom; there’s enough desert-born bullet trading to ensure it. But, there is also no substance. Afghanistan’s troubled existence is simplified down to a single native woman who exists more for her ability to spawn a tired damsel-in-distress finale than produce a basis for her country’s turmoil.

So much of this feature is inter-cutting between B-level, shaky cam close-ups of M-16s and nondescript men in turbans flailing as they’re hit. I’s a wonder if most of this wasn’t stock material welled up in Universal’s library. Jarhead 2’s statement is only to prop up currently held belief systems of superiority. It’s cliché and passe, nothing like the fabricated cover art, depicting helicopters blowing up villages for the sake of democracy – although in intent, Jarhead 2 is not much of a deviation from that image. 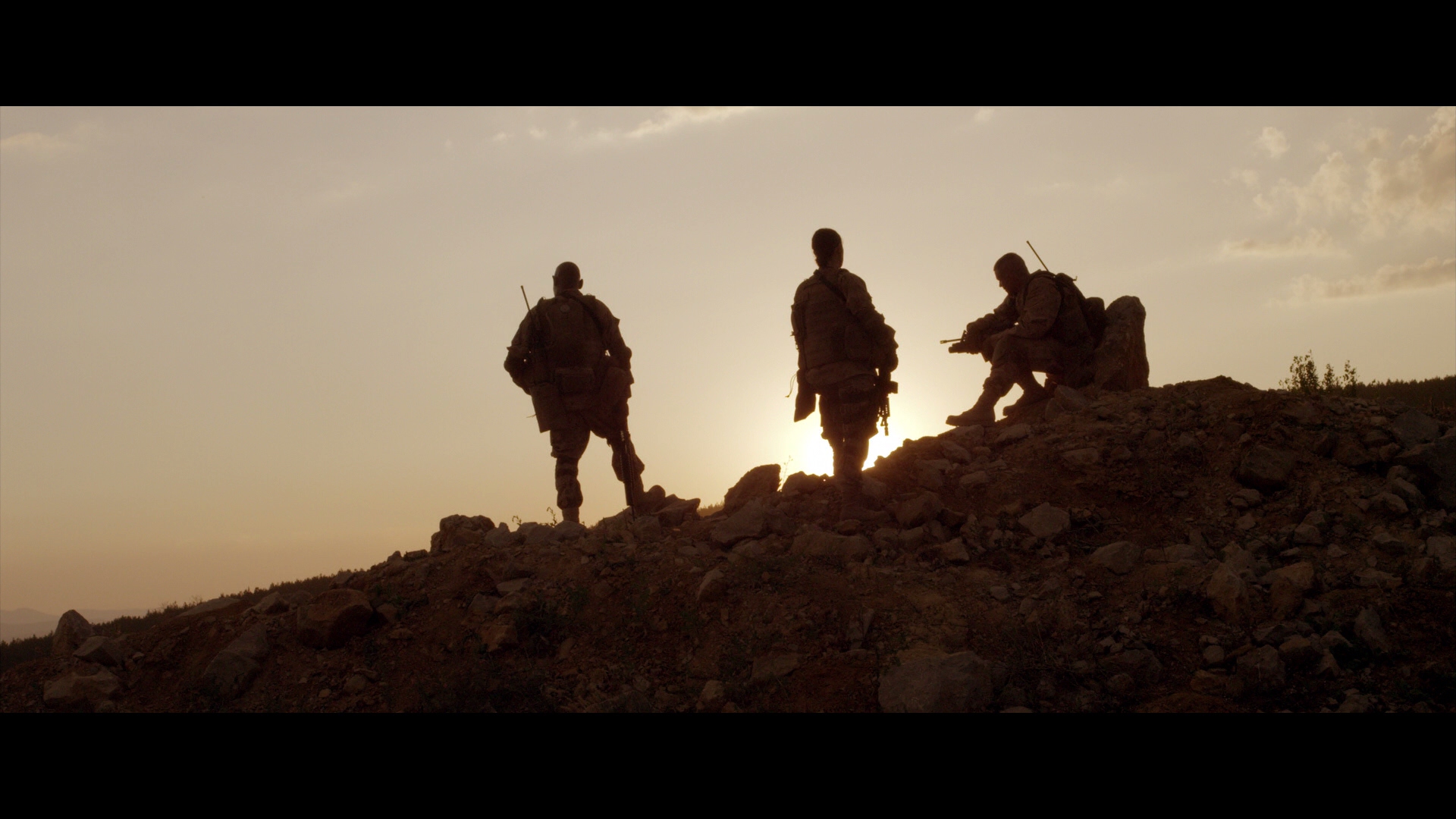 Captured in Bulgaria, the central homestead of SyFy Channel matinees and direct-to-video cheapies, Jarhead 2’s digital ambitions are clean. Clarity in close-ups and lack of noise is impressive. Fidelity is resolute, save for a handful of stock footage images late which are obviously upscaled from SD sources.

Dried rock roads and hills are frequently in front of the lens, displaying a sharpness meant for Blu-ray – no encoding issues here. Black levels within a handful of nighttime scenes will dwindle in impact, if remaining natural to a sense of moonlight. Screaming contrast soaks up a desert sun and often displays it with searing whites. Jarhead 2 is hefty in brightness.

Part of the contrast density comes from post-production. Color tweaks fade primaries and brush up flesh tones, leaving the movie in a perpetual state of intense tans and browns. You will find no luxury here.

Jarhead 2 is a fighter, rising over its budget with fiercely astute images and sharpness. Cinematography is free of tricks, standard (if positive) in terms of its quality turn-around. Considering the process of critique and the typical appeal Blu-ray connoisseurs crave, Jarhead 2 does okay for itself.

B-level audio design works from stock gunfire and explosions – even slipping in a Wilhelm scream. Positioning is notable, showing concern for stereos as much as the surrounds. Bullets are fired and impacted in separate, traceable locations. Sound mixing displays a capable energy even if the work is sidelined by budget.

Each shoot out carries some responsibility to entertain, and a sniper sequence riles up the enthusiast with brisk surround performance. Each shot echoes out from a notable position, helpful in a narrative sense and also serves as a design peak. A handful of explosions are unfortunately limp though, without much weight in the LFE.

Jarhead 2 includes an unrated cut, although this is six seconds shorter than the rated version. Odd. The only true bonus are two skippable deleted scenes coming in under two minutes.