The Japanese icon is finally Americanized with care

Godzilla is an imperfect blockbuster about a perfect American military butting up against three massive natural anomalies who also happen to be a box office draw. Any blame as to pacing (and there are many) falls back on director Gareth Edwards, although on repeat viewings, his cut away madness takes better precedence over the piece. A dazzling finale of CG spectacle makes it all worth it, and Godzilla becomes the triumphant screen chomping denizen he should be.

This is a visually complex film which demands supreme black level adjustment, careful muting of color, and hefty encoding parameters. For Warner’s Blu-ray, “two out of three ain’t bad.” Central here are blacks which may lack the thick density associated with many premium blockbusters, but they cast enough care on the existence of shadow delineation and visual effects to off-set the loss of pure contrast. Godzilla’s finale is that of smoke, haze, fire, and darkness – all of which are kept visible through careful calibration. In terms of representing a city under siege, it’s often beautiful.

Likewise, this movie is hardly a delight as the screen swarms with variations of reds and oranges in the midst of browned out locales. Rarely are there instances where patches of green appear flushed. Dour mood is central to the themes. Washed out grays push scenes at sea and a lightly vintage sepia introduces the opening sequences. The disc has no issues in this replication of the source.

From Warner’s recent crop of releases, Godzilla is amongst those which suffer from errant compression. Problems begin early as subtle smearing and noise appears as cameras perform sweeping pans over water. Banding shows up as red warning lights signal imminent danger in the nuclear plant or during prep for the halo jump. Lightly visible artifacting can be spotted in aerials where sharpness is otherwise astonishing. Close-ups are often smeary and mildly waxy. A few manage to escape that fate.

Most of this is restrained to live action. Much of the all-digital computer effects are great, despite some misgivings over smoke. Compared to the theatrical presentation, this finale seems comparable based on memory. The rest? Not so much. Raw fidelity feels lost and energy is sapped when in motion. It’s passable, but the routine of the studio’s wayward encodes is growing tiresome.

Post-converted into 3D, viewers will discover additional video quirks and with limited benefit. Black levels take a substantial hit in the process, adjusted enough to where visible banding is a frequent visitor. What was once hidden in shadow is now readily visible. The resolution cut will bring around flickering, albeit in only a handful of rare instances over the two hours.

While those may not seem like much, it’s not worth the switch. Godzilla’s visual design is, as stated, immensely dark. In 3D, the space feels crushed by the lack of light and compositions are ill-considered of the eventual conversion. Cross talk is invasive at multiple junctions. Visible depth during the spectacular climax is consistently nill. The number of effective uses is in the single digits – notably one shot from a crane which is super charged to sell space, plus a few ambient moments caused by debris – but the rest sags in total disinterest. 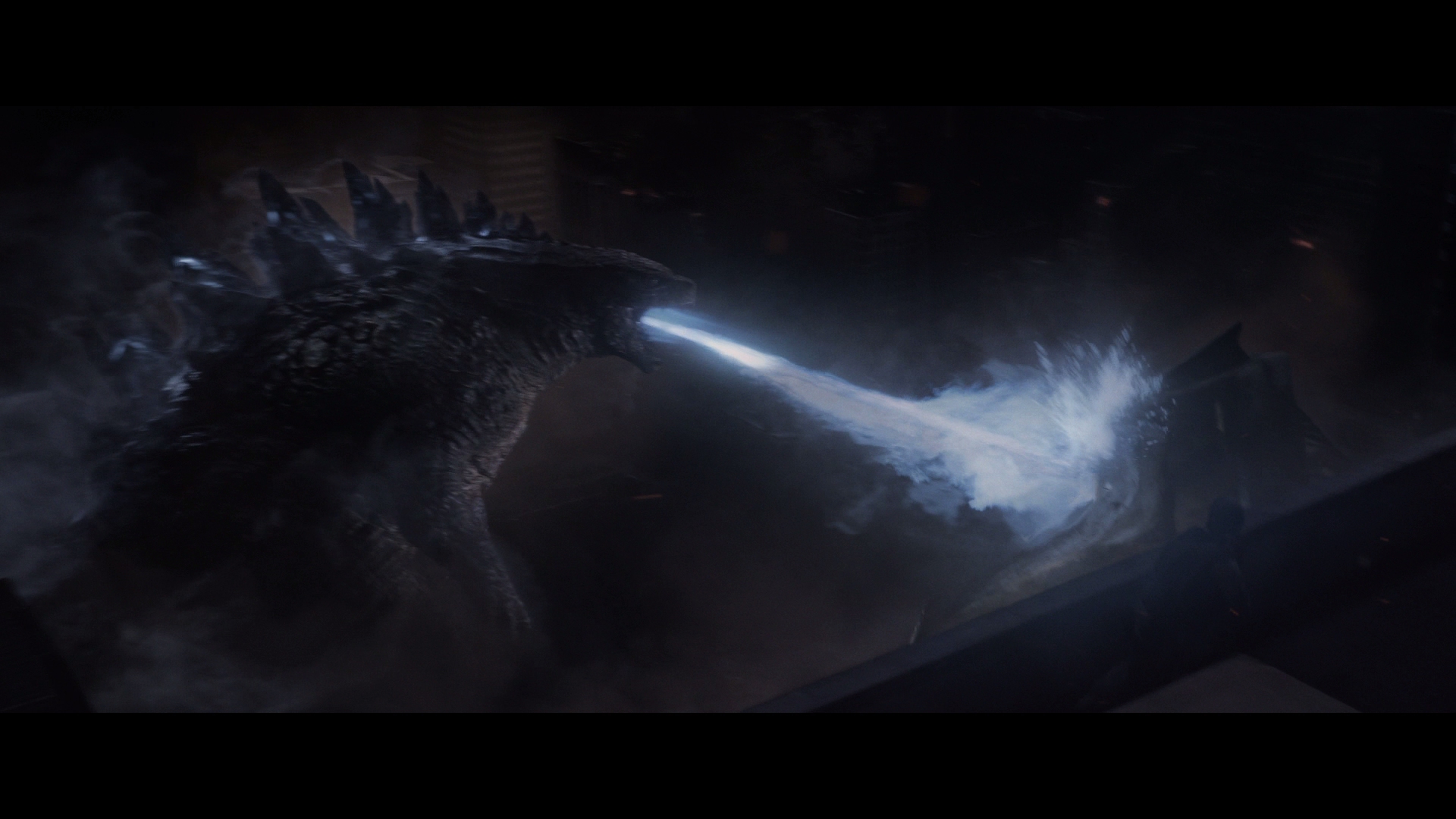 Thankfully, Warner’s audio work suffers none of the same problematic home media transition issues. This is an all-out bombing of powerful bass from the opening credits into a meticulously crafted soundstage which builds the finale’s awe-inspiring sense of scale. Balance is sublime, and in some cases better than the personally attended, over-cranked IMAX exhibition. The full width of the 7.1 mix is displayed with intense ferocity and subtle panning to create a full space of audio purity.

Not an action scene passes without reference quality escapism, from the rush of a tsunami or explosions, rising up to a thunderous foot stomp to ensure Godzilla’s full mass is sold through this DTS-HD work. Monster roars create an admirable echo, from the MUTO’s screechy calls pinging from buildings to Godzilla’s stupidly aggressive and forceful alpha predator roar. Build up is substantial, with tank and jet engines readying to reach their positions, panning through the stereos or rears as needed as they move on from the fame. Ambiance on board a US aircraft carrier keeps a sense of urgency as workers clamor for info and there is a superb bit inside of a casino before it’s destroyed.

One note: At 1:18:02, as a train is derailed, a skip occurred in the audio track. It’s unknown at this whether this was our review copy or something affecting the wider release. As such, for now, we’re ignoring it until confirmation is made. [Update: Checking a retail release, 2D and 3D alike, did not reveal the same issue. It appears to be a quirk in our original review copy.]

In some sense, these bonuses are lacking. No deleted scenes mean ignoring a brief cameo with long time Toho Godzilla staple Akira Takarada. Likewise, no commentary means disallowing an involved Gareth Edwards a chance to sell his distinct style and choices.

But, on the flipside, what’s here does well for itself, even if these brief featurettes feel limited by time. Godzilla Uncovered is the lengthiest item here at close to 20-minutes. While mostly selling the film with an overlay of praise, the material is rich enough to be satisfying. A Whole New Level of Destruction (8:24) focuses on production design, namely with those scenes of scattered debris.

Into the Void’s five minutes are concise with a pre-vis look, and Ancient Enemy tells the story of MUTOs from their earliest conception. Finally, there is a three-part segment labeled Monarch Uncovered, which exists as conspiracy fodder about the film’s events. It’s viral material long after such content has seen its usefulness.