“There’s snakes out there this big?” Yes there are Mr. Ice Cube, and it’s a shame they’re under such abysmal technical parameters on Mill Creek’s Blu-ray

Taking 1997’s Anaconda as the gratifying self-parody it is turns this lumbering creature thriller from dense to wholly enjoyable. Stretched out on the visual warmth of the Amazon, Anaconda pieces together an unbelievable documentary film crew, more diverse than pre-chosen reality shows.

Jennifer Lopez putzes around a small boat while Jon Voight soaks up his true starring light, complete with an audacious Peruvian accent as an outcast snake hunter. Somewhere else, Owen Wilson flashes romantic vibes to Kari Wuher, with the stuffy Brit Johnathan Hyde berating Ice Cube as Eric Stoltz spends much of this flick sleeping. Seriously.

A trio of writers pumped out this realignment of Creature from the Black Lagoon’s franework, marginally tweaking the formula for a bumpier human saga and of course injecting a multi-million dollar robotic/CG snake. This formula, in conjunction with 1998’s Godzilla, was considered taut enough to spin up a flash of monster cinema, including the gratuitous classic Deep Rising and the shark-based schlocker Deep Blue Sea.

And why shouldn’t Anaconda score in this company? Manufactured for repulsive idiocy, director Luis Llosa lashes out with crude tension and implausible happenings, all to sell this clunker above the low-end, mid-range budgeted dud it was intended to be. It works.

Pacing is ferocious, character deaths are cringe-inducing, and action is appreciable. Anaconda is the type of moronic cinema which misses the needed plurality of its title (there are multiple snakes), then decides a rib crushing 25-foot serpent to be inadequate – so its sets one on fire to chase remaining cast members. Fire Snakes of the Amazon obviously didn’t have the needed poster punch.

Anaconda does not contain a gram of original thinking, plotting, or logic. Audio designers failed to acquire a suitable roar, so voice actor Frank Welker stepped up to hiss into a microphone instead. Frank Welker’s Amazon Fire Snakes. No, still doesn’t work.

It’s formula, because nearly all American-based, major studio monster pictures are. Either Jaws is cloned or a small concentration of in-movie nobodies become impossibly isolated. Thank Alien for that one. Anaconda is a contemporary mixture with the water based title critter slithering into frame for amusing titillation and brainless escapism. Sometimes, that’s what movies do best, even when they turn dreadful. 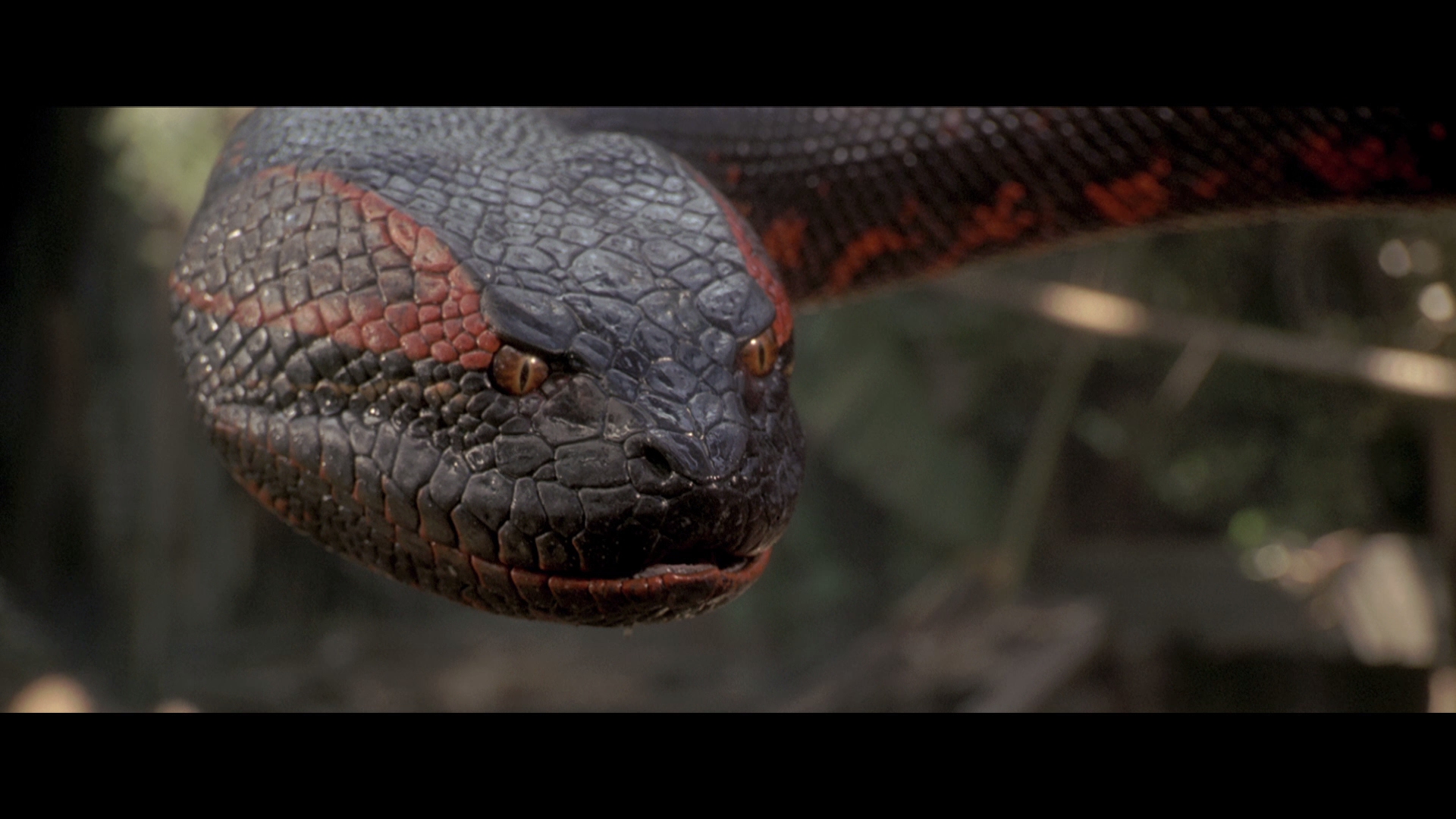 One of Mill Creek’s Sony acquisitions, the small distributor issues an AVC encode above their normal parameters while the master crumbles under modern scrutiny. Anaconda’s filming conditions were undoubtedly difficult given the location shoot, although proper and modern high res scanning could elevate what exists here.

Buzzing grain and noise are amongst the initial burst of complaints, causing images to be swarmed by digital artifacts. Transfer work seems primed for an eventual pairing with other films on crammed BD-50s. Mild processing is evident, particularly in medium shots which tend to produce overly glossy skin and oily waters as the boat passes on the river. However, that processing (whether new or old) is not enough to settle the grain into a comfortable pattern which should resemble a film stock.

Pale black levels construct frames low on density and high on paleness. Inside the brush, blacks limp to a dimness unacceptable on any disc regardless of age. Anaconda struggles with stability in its depth, wandering from nighttime crush to elevated grays. None of these frames are particularly satisfying, and contrast is under a constant hit of orange.

Anaconda’s print is clean; that’s something to say for this disc. Damage is lessened to mere specks to a number of frames an early grade school child could count. Of course, that clean source means little. Colors are dulled and even if they weren’t, the pinch of questionable compression and outdated mastering would have suffocated this flick’s format chances anyway.

In context, maybe the video presentation is a marginal victory. Compared to this audio track, with its stereo only Dolby Digital inner workings, the video is super. And, while it is baffling to see compressed audio on a feature like this, the mixing work further erodes a problem decision.

Action scenes are at the center of the issue with wild balancing, wavering as if the pieces were stored on a warped record. Randy Edelman’s score, arguably Anaconda’s high spot, either sinks under sound effects, or rises high enough to blot out voices. There is no consistency at play. Lines of dialog are lost almost entirely under this mess, and since the disc has been produced without subtitles, no back-up plans are available.

To mild (very mild) credit, the stereo mix is fairly wide. Hokey snake sounds can be heard panning side to side, and a few specific splashes ensure they’re pushed into the proper channel. Anaconda’s audio cannot be saved by a few splashes though.

Anaconda jumps into the opening credits, but a menu does exist. However, it only offers the option to play the movie. No bonuses here.