Transcendence is a hot mess of a science fiction film. That is technical reviewing language for a movie with an impressive cast of Hollywood actors mired in an ambitious film, one that never really gets off the ground. Starring Johnny Depp and Rebecca Hall, the sci-fi thriller has pacing issues and a clumsy narrative full of plot-holes. Despite a heady script that thoughtfully works with the possibilities brimming in the field of Artificial Intelligence, Transcendence’s reach exceeds its grasp.

Many in Hollywood were expecting big things from Transcendence. Rookie director Wally Pfister was known as the visual mastermind behind the cinematography for some of Christopher Nolan’s biggest hits, including Memento and Inception. Pfister had previously established himself as possibly the best cinematographer working today, so expectations were high he could deliver an excellent movie as director. The great Christopher Nolan even helps his friend out as a producer on Transcendence, a few of his fingerprints can be felt on the final product.

Its ambitious take on a number of cutting-edge ideas from the field of Artificial Intelligence includes the Singularity, when mankind finally produces machine thinking that far surpasses our own human limits, and this newer idea that existing human brains’ data could be uploaded to hardware and simulated on a virtual level. It goes deep into the future possibilities of nanotechnology and tissue regeneration. This is all well and good if the story didn’t have several plot-holes and a rushed ending, destroying its intellectual integrity.

The story revolves around Dr. Will Caster (Johnny Depp) and his wife, Evelyn (Rebecca Hall). Dr. Will Caster is a world-class computer scientist when he is poisoned by anti-Singularity terrorists calling themselves R.I.F.T. Why any credible terrorist group would name themselves after something that sounds like it came from a G.I. Joe cartoon is the first hint that Transcendence will have problems. Knowing he is dying, Will Caster and his wife upload his brain’s data to the core of a supercomputer with their friend Max Water’s (Paul Bettany) help. Morgan Freeman plays a minor supporting character that dealt with the original supercomputer before Will Caster’s mind got into it.

Like any good science fiction film, the movie becomes exciting for a moment when this new, virtual version of Will Caster quickly becomes an all-powerful machine intelligence. This is where the film soon loses plot, however. Evelyn desperately wants to believe this new entity is her husband’s consciousness in a machine, while Max thinks it’s a dangerous entity that may or may not be her husband. Evelyn escapes to a desert town with this omniscient intelligence guiding her, carefully preparing its future for the inevitable conflict when outside forces realize it has gotten too powerful.

Some of Transcendence works well, though it keeps far away from the creepier implications of Evelyn’s relationship with her virtual husband which might have added the necessary edge. I think a good barometer for how someone will respond to it is how they feel about Inception. Inception is the better movie but there are definite similarities between the films. With Depp in the lead role, it is hard to accept seeing Captain Jack Sparrow as the world’s leading computer scientist. The star was chosen for his box office potential in this role than any real credibility. The cast is impressive, as even minor roles are filled by notable actors such as Kate Mara and Cillian Murphy.

Transcendence is fine entertainment as a thinking person’s popcorn movie. The movie simply requires a willing suspension of disbelief that makes it a more pedestrian science fiction film than it aspires to be. 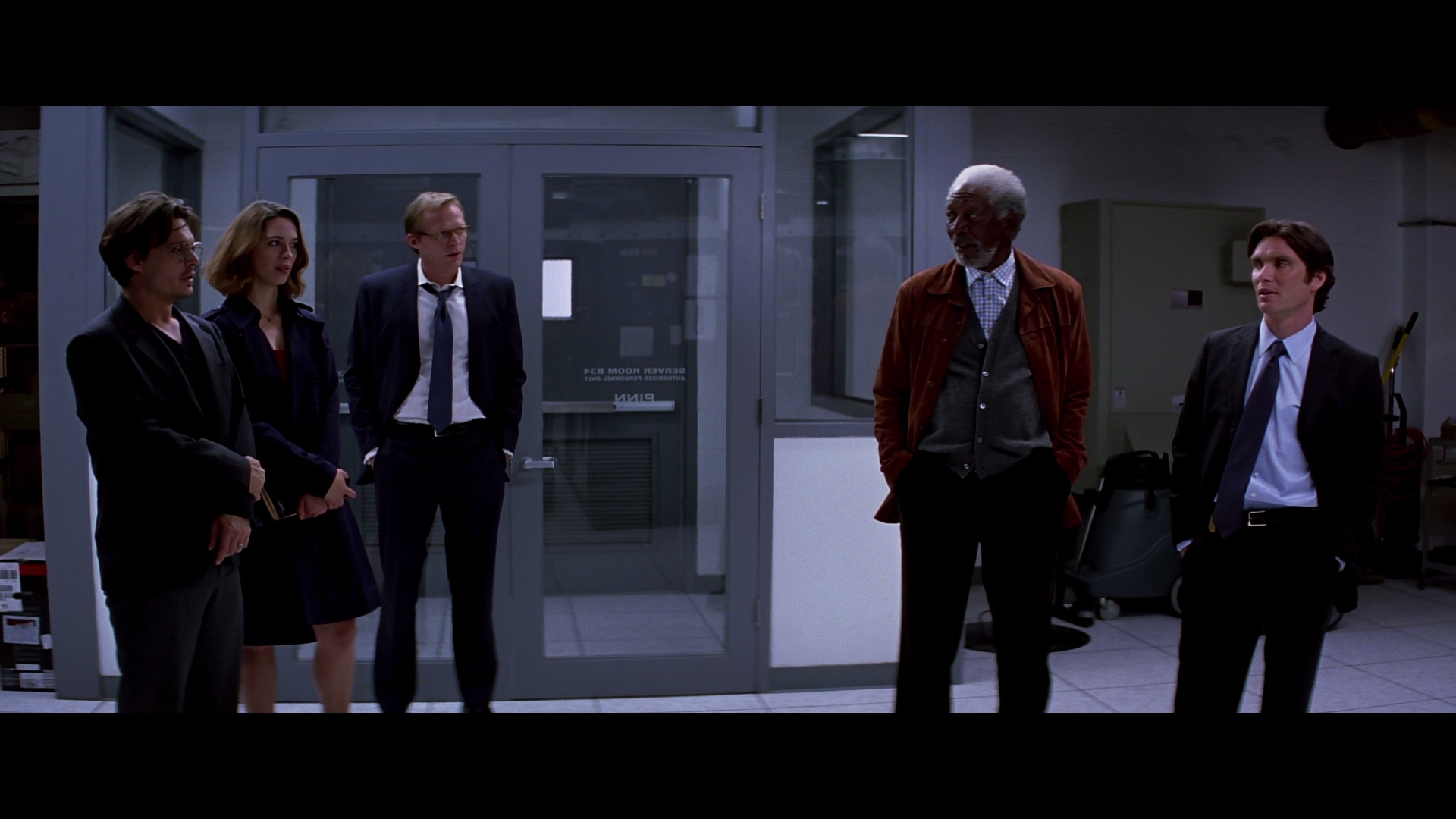 Wally Pfister’s first directorial feature ends up somewhat disappointing in the picture department, despite imaginative visuals and occasionally cool CGI effects. Warner Bros. delivers an adequate Hi-Def presentation with a few concerns. The two-hour main feature is enclosed on a BD-25, limiting the AVC video encode to an anemic 17.87 Mbps average. There aren’t overt compression artifacts but it’s very possible this is not a completely transparent encoding of the Digital Intermediate at higher resolutions.

Shot on actual film, typical processing has been applied in post-production to massage the final product. Its 1080p video is framed in a widescreen 2.39:1 aspect ratio. The contrast and definition are good for a new Hollywood blockbuster, not great. Reasonably sharp, some vestiges of the digital effects creep into the film’s light grain structure.

Possibly helping out aging stars like Johnny Depp, the high-frequency content is affected to some degree. One simply expects more fine detail and resolution out of a film transfer in close-ups than what Transcendence provides in 1080p, though this will be a problem only noticeable on the largest displays. Normal viewers will likely think nothing is the matter during a casual viewing.

Transcendence has a glossy, polished look not that uncommonly found in big science fiction blockbusters. Crisp black levels reveal excellent shadow delineation, though a couple of scenes veer dangerously close to crushing them. This is a darker movie that comes to life in the better exterior shots, revealing a fairly neutral color palette with vivid saturation. Color grading is good, rendering naturalistic flesh-tones.

The 5.1 DTS-HD MA soundtrack is an unqualified success, a deft sonic explosion that weaves in a subtle score with ear-pleasing fidelity. The first couple of acts begin with more intricate, quieter moments, featuring an active sound design that greatly enhances the film with solid Foley effects.

Bigger pyrotechnics are saved for the climatic battle staged at the end, bullets and explosions occurring all over the soundstage. Crystal-clear dialogue and powerful bass boost a state-of-the-art surround mix from ordinary to almost reference quality.

French and Spanish dubs are included in 5.1 Dolby Digital at 448 kbps. Optional English SDH, French, and Spanish (Latino) subtitles are included by WB, offered in a white font that resides halfway outside the widescreen framing.

The list of special features look impressive at first glance but these are all glib featurettes, working as little more than promos for marketing the film. Warner Bros. has chosen to include an ordinary, glossy slipcover on first pressings. Transcendence includes a DVD and an UltraViolet copy that redeems in HD on your favorite digital provider.

Considering how brief most of these featurettes are in duration, they interview most everybody from director Wally Pfister to Morgan Freeman and Johnny Depp. Nothing substantive is covered but I guess it’s nice to hear their voices speaking on subjects they probably don’t understand.

What Is Transcendence? (05:20 in HD) – The concept of “transcendence” is discussed by the cast as it looks inside the film’s exploration of Artificial Intelligence and the Singularity.

Wally Pfister: A Singular Vision (02:52 in HD) – A puff piece about the creative vision of Wally Pfister.

Guarding The Threat (02:18 in HD) – A recap of the movie, I can’t believe this was intended as anything but a promo for the movie.