Is robbing underground Mafia clubs actually a crime? Rob the Mob investigates in this true story

They weren’t smart, but Tommy and Rosie Uva were gutsy and passionate. As John Gotti’s trial swept through the media’s eyes, the cunning duo mopped up funds from underground Mafia clubs, seemingly free of consequences.

Rob the Mob is distanced from public glamor. Tommy’s (Michael Pitt) inhibitions and broken family offer him nothing to lose, while Rosie’s (Nina Arianda) perkiness make up for her middling collection agency job. Enter desperation when employee bonuses dwindle and the couple face financial ruin.

Tommy is belligerent, offensive, and too impulsive. Pitt’s portrayal is that of an unlikable, low-end New Yorker split from common sense. Rob the Mob, penned by Johnathan Fernandez, is patiently in the midst of a build up to wrap Tommy in the fold of a folk hero, someone who swiped illicit funds with an internal gusto few would claim to have. Whether the effect works is purely personal.

Focus bends the camera toward leering mobsters including Big Al (Andy Garcia) who in some way, almost appreciate the brashness of the masked robber. Al’s fading leadership in old age creates a character amidst a reconciliation for his past, a remorseful killer who (despite a pittance of scenes) is Rob the Mob’s dramatic center.

Otherwise the film is glorification of incompetent boldness. Tommy doesn’t know how to load a gun and still barges in to humiliate a connected group of hitmen, breaking stringent tension for a hit of comedy. Rob the Mob swings through genres wildly, ushering in romance and thriller aspects as it pieces together this early ’90s true story. Material is uprooted by an uncomfortable and plodding first act which turns the feature lopsided.

Ray Romano pops up as a reporter, again an interesting side character flattened by a lack of scripting behind him. Wrestling with ethics and the front page exposure he gave this labeled “Bonnie & Clyde” pair, Romano’s Jerry Cardozo is an attractive narrative hook discarded for more sentimental blandness with Tommy and Rosie.

Rob the Mob seems to bend reality with fictitious characterization, plentiful when in regards to Dave Lovell (Griffin Dunne) as a reformed career criminal turned department manager whose wild flamboyancy is too ecstatic to take seriously. Lightening the mood is disaster when misused, a direction Rob the Mob often steers toward without being fearful of the consequences. Maybe the film is matching Tommy and Rosie’s brazen disregard for the rules too. 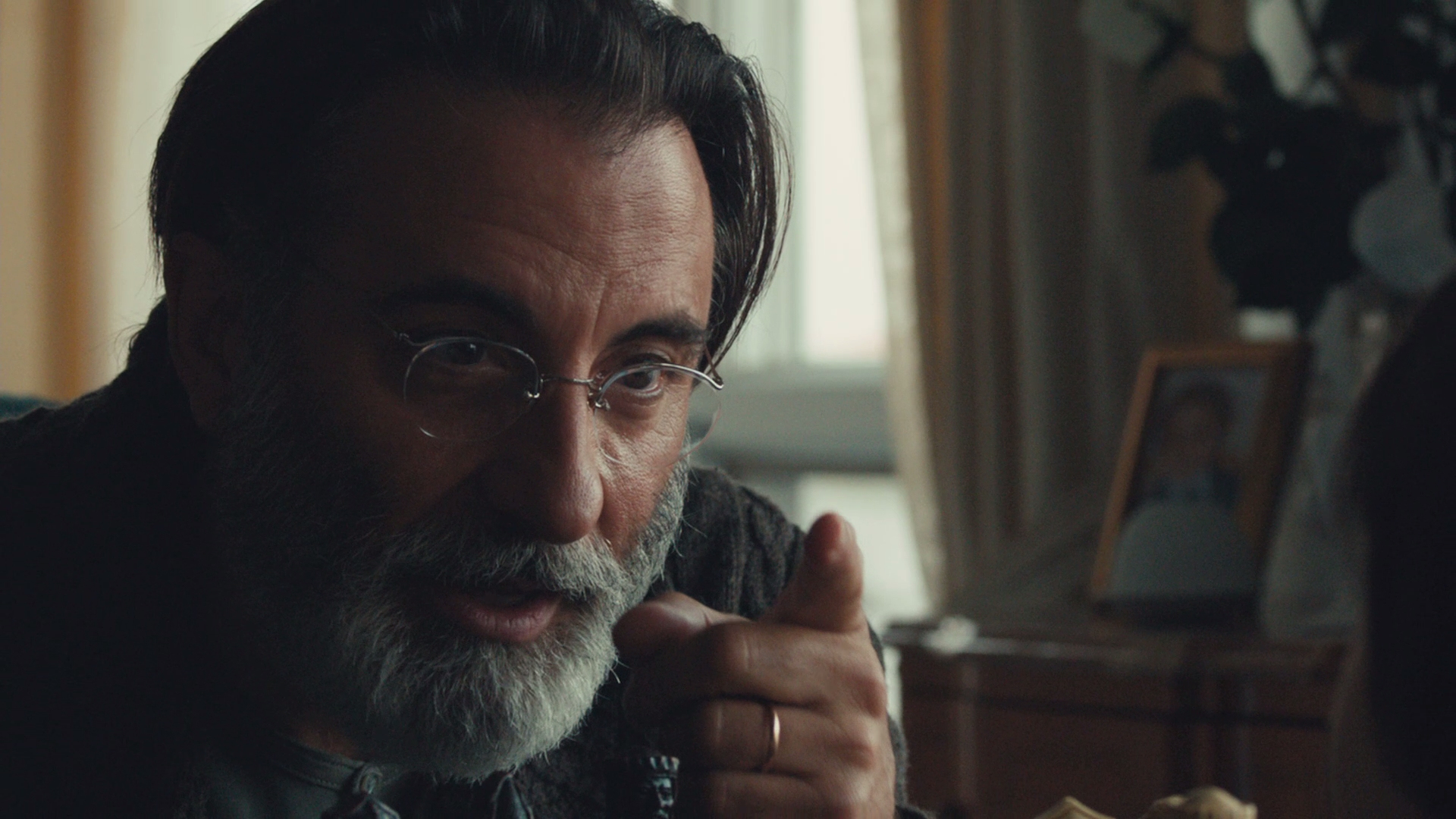 Framing seems tight as this Blu-ray opens, possibly the cause of cropping. 16×9 (presented on the disc) and outside listings of 2.35:1 create a conflict without a definitive source. Either way, the disc from Millennium feels scrunched when cinematography turns wide and close-ups have an exaggerated stuffiness to them.

Potentially fumbled aspect ratio aside, Rob the Mob is coded with AVC, presenting a consistent layer of mild noise which reaches a handful of annoying peaks. Clarity is otherwise stern, with zooms well textured and tightly resolved. Digital tinkering saps life from scenes inside of an office, floundering in detail reproduction and revealing a non-film source.

In conjunction with filtering, further alteration squeezes in plentiful layers of orange, warming imagery before being chilled as needed in dour sequences. Rob the Mob is romanticized amongst its balmy facade, and flesh tones won’t escape even if they rarely fall into garish tans. When allowed, primaries will strike but are typically blasted by post-production alterations.

Overall, this feature appears faded, with sapped black levels often adhering a level of haze to each shot, especially exteriors. This graying matches the downtrodden look at this smudgy New York area, effective in creating mood if robbing shots of natural visual appeal. The trade-off is passable.

Rob the Mob may be DoBlu’s first ever review to be built without a single audio notation behind it. Despite the sonic clamor of big city life, audio design is fine with sitting back. Street side is voided of natural ambiance and stray gunfire hardly works into stereo channels. Apparently, it’s comfortable with the center speaker.

Millennium’s TrueHD mix may be happy with the work, yet it’s unsatisfying labor. There is no fun, no stereo split away from music, and no surround materials to take notice of. Blah.

Director Raymond De Felitta seats himself behind the mic for commentary duties, a bonus highlight when the rest of the slate are three separated deleted scenes and a trailer.