When transforming alien cockroaches descend upon the Earth (!) to build a Godzilla theme park (!!), it’s up to a banana eating do gooder (!!!), karate chopping female (!!!!), and floppy slapstick comic book artist (!!!!!) to save this polluted planet. It could only be a ’70s era Godzilla vehicle.

But, there are saviors. From Toho’s grungy ’70s era kaiju canon, Gigan is not a persistent blight. Nakano, further stripped of finances, displays an unusual, hand molded purpose in executing a time saving, behind-the-scenes plot. Yes, stock footage is culled from no less than five Toho monster extravaganzas, but between those splices are genuine creative peaks. Godzilla mashes it up – partnered with a paint dripping Angilas suit – around a dockside oil refinery to beat down Ghidorah and Gigan in a pyrotechnic spectacle. Energetic military duels topple buildings and tightly photographed miniatures intelligently blot out their middling scale. This isn’t ineptitude – it’s ingenuity.

Guiding the material is Gengo (Hiroshi Ishikawa), a short time actor pushing out his lonesome Godzilla credit and Yuriko Hishimi who stepped away from an Ultraman set for this miniature smashing duel. Most of the cast were following or followed such a career path, sinking into unknown features or dropping mere years later from filming existence. Original Godzilla actor suit actor Haruo Nakajima would retire from the role after this inconsistent entry. It’s Kenpachiro Satsuma inside of the oddball Gigan suit who can finally breathe, allowing him to break free and become Godzilla’s suit actor when the series resurfaced in 1984.

Satsuma’s role is purely formed from outlandishness, coming from the same squad who patched together series oddities like Megalon or Hedorah. So colorful and stupid is Gigan (with a belly buzzsaw and hook arms) however, those creative juices can outlast the vacant comedy of the human drama and villains who speak only in exposition to those who are soon to vanquish their plot. Behind it all is director Jun Fukuda, producing his tightest monster melee with authentic caution applied for scale and a visual scope to crush the odds against Godzilla. He bleeds in this film. Then again, he also talks in a warped, record scratching sort of way. Franchise enthusiasts have to learn to take the good with the bad. 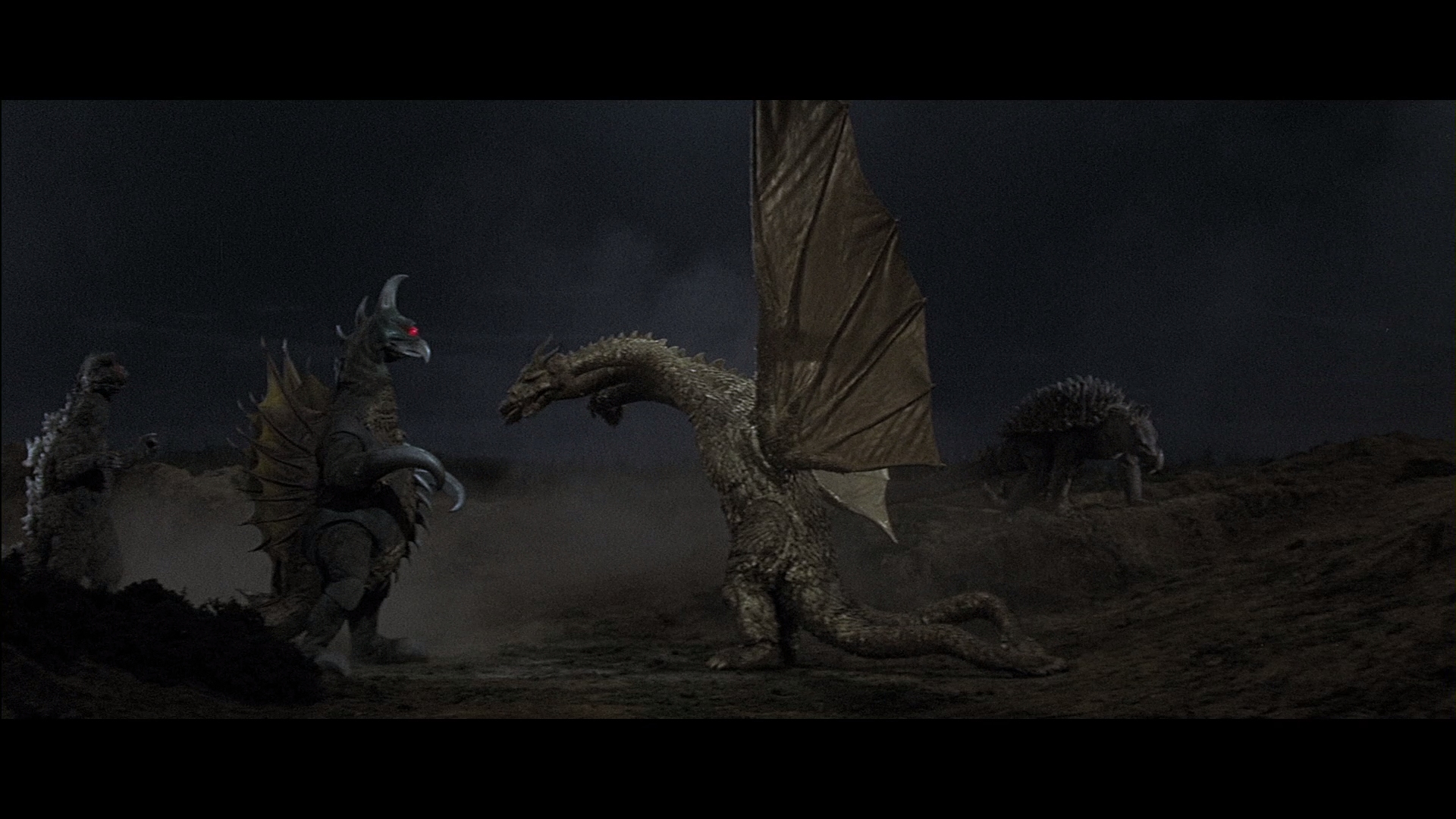 Kraken Releasing’s third (chronologically anyway) Showa series Blu-ray shows a tank running on empty. Gone is the precision grain reproduction which highlighted their Sea Monster and Hedorah discs. Replacing it is a stocky and overly compressed appearance, plus a bitrate which refuses to keep itself tidy.

Some source budgeting snafus could have forced a lower grade film stock. Evidence of finance slashing can be found in the low stock footage clarity, any botched night filters notwithstanding. Despite this, layers of natural clarity are visible underneath the perky haze. Fidelity and sharpness far outlast Sony’s DVD. Textural qualities are pure, if battered by the digitization to disc.

The master provided to Kraken is beautiful (if somewhat low in resolution), with a barrage of specks and scratches held to (in some cases) decades old footage from other films. New footage (new to 1972 anyway) is thus pristine, with marks only visible during moments of thick haze or smoke. Color saturation is pleasing without stepping away from normal boundaries.

Of final note are black levels, cranked to perfection as the film soars into space. It’s pure black, and such flawless use carries into the rest of this feature. Contrast, by comparison, can be pushed with some light blow out during first act scenes before settling in with a quick recovery.

Pulling together a compilation of Ikira Ifukube music tracks, DTS-HD stereo performs its codec duties to reproduce those stock themes with total clarity. Drums are rich and horns pure. Whatever their source, they stand as some of the cleanest of Ifukube’s work on the format to date. Explosions and monster roars are lightly dulled without any ill effect.

Imperfections lie only with the grating dub. Japanese dialog in the 2.0 mono mix is clean and freed from age defects. The optional low quality dubbing is scratchy and strained.

Kraken issues their disc with a Japanese trailer as a bonus.