Blazing Saddles is the ultimate slaughter of bigotry, completely outside of good taste. As a western and genre parody in addition to its piercing shot at racism, Brooks’ ingenious frontline satire is – unfortunately for common sense – still relevant in 2014.

Brooks’ work is due in film study classes for its easily derided yet intelligent lambasting of mental idiocy. Importantly, no one or no one topic is safe. Blazing Saddles’ equal offender attitude splits lines of color, sexes, religion, lifestyles, and the Irish while doing so within a torrent of bean farts. Scripting speaks down because it has to. Too high brow and the audience this is meant to drill into may miss any subtlety.

And, maybe this is for the best. Cleavon Little’s spunk as a crumbling small town’s sheriff is a shrewd jumping point to incite this riotous collection of racially ignited buck shots toward political correctness. Rock Ridge is the Western anchor, where ice cream parlors serve one flavor and bars host spit shined glasses. Exercising his right to ingenuity in a town which has none, Little’s sharp stride embodies the flawless tonality Saddles requires of him.

Bound to Warner Bros., Brooks allows his film to inhabit the range of a cartoon as much as Western tropes – a sniveling villain, playful side characters, and implausible ideas meant to trip up Rock Ridge’s quick witted law. Harvey Korman’s “That’s Hedley!” Lamar is Saddles’ equivalent to Wile E. Coyote, failing with bungled smarts and overwrought, broken Shakespearean dialect. Each hatched plan is doomed to fail, Lamar outwitted by what he despises and thus solidifying Saddles’ level headed metaphor.

Even for 1974, Brooks’ work was teetering on societal acceptability. Now, it appears so lewd and obscene, Warner saw fit to place a marketable warning sticker on the Blu-ray. Were this Disney, they would have shoved it into their vaults and conveniently lost it. But, Saddles is not a piece of historical significance because it never lost its significance – or horse punching charms. This is not part of our past, but rather a part of our present which is now usually filtered through catch all internet posts about a racially divided event on social media. Saddles not only entertains as one of Hollywood’s grandiose, loony comedies, it bonks people over the head with a reality we’d rather ignore and pretend didn’t (or doesn’t) happen.

Although the current fetish of cinematic symbolism is Earth’s polluted destruction, this also encapsulates why this messaging doesn’t work: The films are not entertaining. We have to laugh at logic gaps and call out scientific plot holes, ruining the intent. Blazing Saddles leaves all of it at the gates of Warner Bros. Studios as the feature slips from a back lot set into the great pie fight in the commissary. Why should it make sense when bigotry doesn’t either? 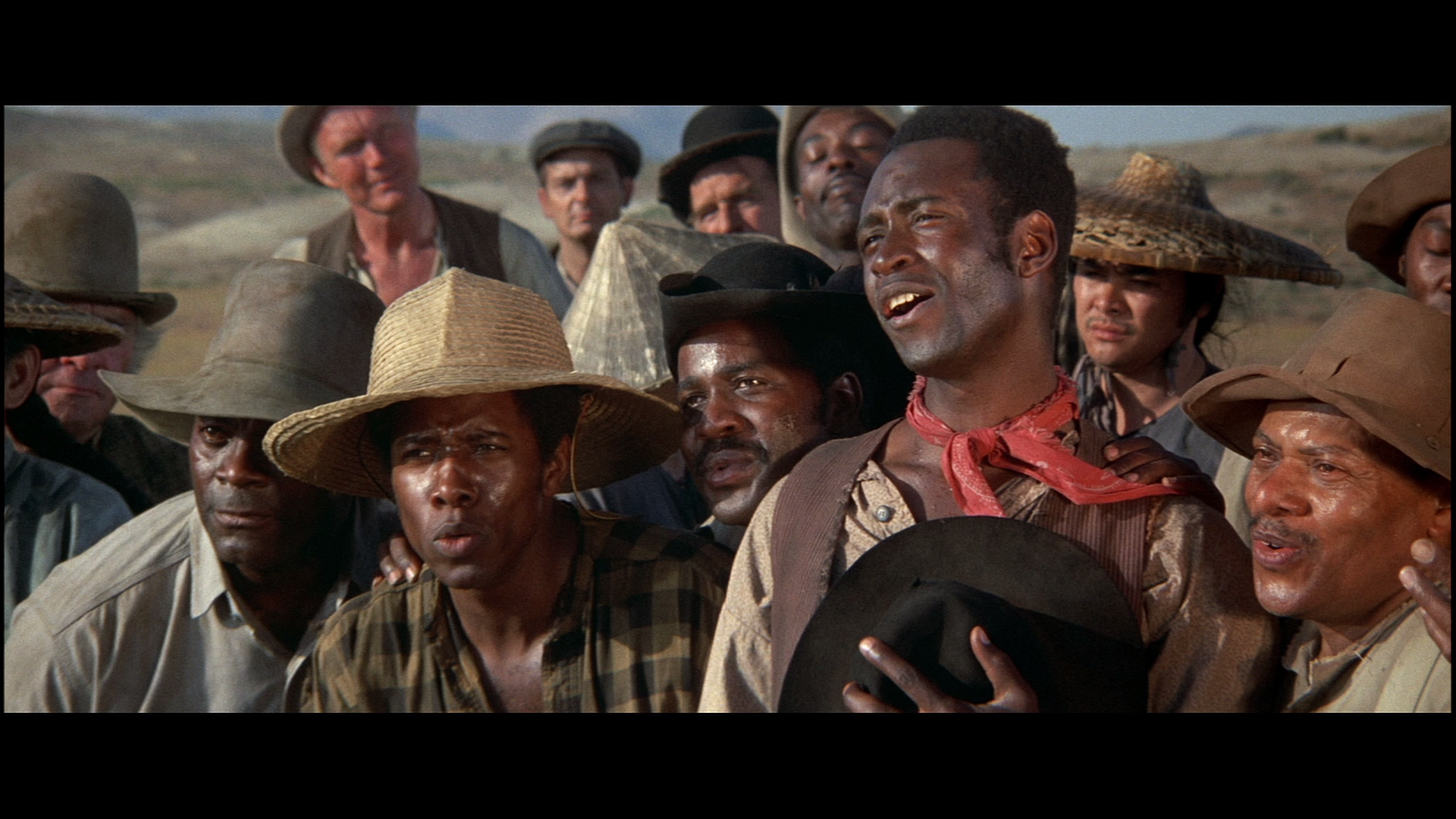 Warner’s third go round with Blazing Saddles on HD home video (including HD DVD and Blu-ray) is this 40th Anniversary edition. Content? The same, mostly. Gone is the dated VC-1 compression from the days of codec wars, replaced by a spiffy new AVC coating… on the same master. Ultimate gain? Not much of anything.

Blazing Saddles shows care. Limited damage is visible, including a handful of scratches. It’s an instant tell this is the same master. To their credit, Warner’s work is exceptional. Fidelity is striking and grain management is outstanding.

Age seeps in through resolution and color. Close-ups are barely affected, while longer shots carry a fuzzy hallmark of lower quality scan work. Clarity can feel mismatched when the camera pulls back from detail rich zooms. While gorgeous, this now comes in the face of Warner’s other catalog work which is often impeccable. Saddles no longer holds up with those pieces hanging over it.

Then there is equally uneven color which reproduces splotchy patches of red, distinctive on the marching band suits and the “wed wose” given to Madeline Kahn. While the imagery maintains a dusty look to suit the vibe, it’s a minor distraction to see certain hues leap from set boundaries. Nonetheless, this isn’t worth griping about aside from the cash grab quality.

Finally this film escapes the reigns of Dolby Digital for a 5.1 DTS-HD mix, mirroring the design of old. That means extensions into the stereos in critical scenes (farting at camp, end movie brawling) and full wrap around of Frankie Laine’s booming vocals during the credits.

Audiophiles may argue, but this move to remove the layer of compression is, well, ‘meh.’ Dialog reveals its aging process and with mild improvements set aside for the score, there is little evidence of a quality boost. From the purist perspective, the key loss should be the original mono track. That has been removed.

A new bonus appears called Blaze of Glory, a half hour chat with Mel Brooks about the feature, its relevance, and purpose (in addition the usual round up of behind-the-scenes stories). Is it worth another Saddles purchase for this? No. Is it interesting? Yes. Also, there are physical extras. A set of stills with quotes are nice, if hardly a selling point.

Everything else is (mostly) ancient by home media standards, including a partial length interview/commentary with Mel Brooks, the TV pilot for a spin-off called Black Bart, seven deleted scenes, and Back in the Saddle which brings back some of the cast to discuss their parts.