“Some of this” actually happened, so says the title card which follows authentically vintage studio splash screens, leading into American Hustle’s title. David O. Russell pinches down on character, leaving his narrative soggy as the director invests time in five personalities. A bloated Christian Bale and cleavage spewing Amy Adams pull along mobsters, FBI agents, and politicians into a darkly comedic spire of financial absurdity.

Thus, the hustle is on. In the background. Hustle is lifted by seemingly puny consequences, from Rosenfeld’s questionable marriage to a manipulative single mother (Jennifer Lawrence) to Amy Adams’ sexual ping pong between the men she alluringly leads on. Hustle is obsessive with skin and ample sexuality, charged through characters who use their body given assets as control mechanisms. Never is the feature subtle.

Interplay and performances are too ludicrous to fit into a natural reality, although slugs of the true life Abscam are whittled in to settle this content down. Easing this material are patches of comedy – particularly from Lawrence – as if Hustle wasn’t enamored with the bizarre by being insular with its humor.

It’s difficult to parse Hustle as memorable. Ten Oscars later, the film carries a warped public perception of negativity, although it is undeserving. Hustle’s allegiance to a perverted authenticity for the sake of differentiating its character psyches is a crack at mainstream cinema followers. Russell’s Silver Linings Playbook was gifted with softness and heart. In comparison, Hustle is battered by ugliness and a narrative structure which reveals itself only during closing chapters. Distinct? Yes. Marketable? Partially.

Political hypocrisy is a worldwide language. Financial chairmen pulled from their homes in handcuffs for money wiring fraud is not only American. Hustle draws on those instinctive frustrations and surprising identity swindles, but does so in its own way. It’s brazen in delivered oddities and too complex to be plausible. But, traveling through these (loose) historical circumstances with these people and these performances is how it should be done. 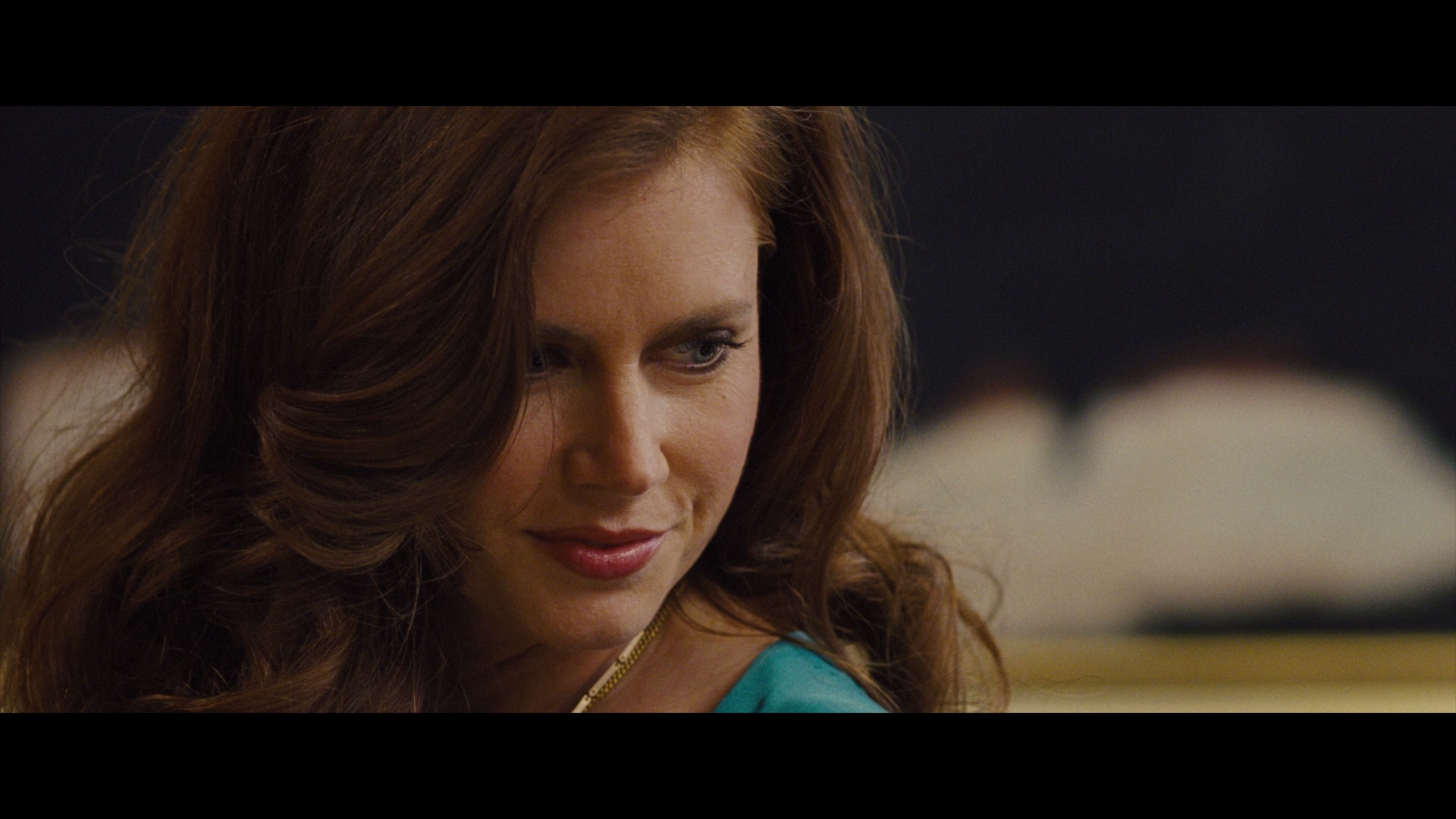 AVC encoding’s task is to wrap this beautifully crafted grain structure into workable digital material. It does. Hustle’s appreciable film base is mature, stocky with its grain through a vintage veneer. In motion, with over worked bitrates in play, this transfer is gorgeous.

Post production color tweaks hit Hustle with a regular golden glaze, another ample trait to work in a purposeful sense of age. Instead of sepia, Bale and company are amidst a glorified late ’70s with an intended warmth for the period. Flesh tones break from normalcy as a result, although scenes caught in natural light are splendid in their recreation.

This is ultimately a disc of premiere sharpness, save for cinematographer Linus Sandgren’s frequent focal fades when pulling in or out from edits. Riveting close-ups gleam superlative fidelity and facial definition with a rare consistency. Few films are this considerate of pulling together such detail driven depth.

Splendid contrast examples and flawlessly rendered black levels can only help further weigh imagery. Never is there a loss of either depth assist, helping Hustle visually pounce on its relatively reserved budget. Shots look pieced together with nine figures and instead, this was done in the low eights.

Dialog is oddly jumpy for a modern offering, skipping between an expected purity in quality before being sapped with a hollow sound which carries a feeling of raw on-set recordings. The frequency of these drops is often too, a somewhat bizarre fault.

Hustle’s sonic range is culled from songs of the era, infinitely better than dialog delivery. The soundstage is heightened by background records or taken over as needed by the narrative. Recordings receive additional breadth from their decades of existence by this smooth and natural DTS-HD replication.

Ambiance is dimmed elsewhere with an exception made for an airport landing strip. Engines pan with special attention given to the left stereo as a background plane takes off.

Eleven deleted scenes (22:38) also slip in some alternate takes, including one of Jennifer Lawrence cleaning her house which is of note. A making of is focused tightly on the characters and their development for 16-minutes. Trailer buffs are given the final extra.