Gone is series directorial staple Ishiro Honda, replaced by an unfairly maligned Jun Fukuda, and Akira Ifukube is dropped from his composer seat for the chipper Masaru Sato. Godzilla vs. the Sea Monster officially bends the franchise into nonsense, including a volleyball rock fight and Sato’s beach jiving jingle as jets bombard Godzilla. Shift in tonality or not, Sea Monster is comfortably set with kooky ideas.

An anxiousness settles in as Sea Monster lumbers around with a batch of discarded, non-sea worthy 20-somethings. Godzilla won’t break from his illogical rocky imprisonment for 50 minutes, leaving favorites Akira Takarada, Kumi Mizuno, and Akihiko Hirata to outwit one another on an island locked down by the sniveling organization Red Bamboo. Dot it with humor, slip in some sheepish secondary leads, and Sea Monster takes form.

Behind the action are Infant Island natives (confined to a dismal studio set) dancing away to appease an ironically moth eaten Mothra prop, a pale left over from its days blasting Godzilla with its wings – not that it matters in terms of marketing ingenuity. Japanese theater goers, females especially, paid for mystical moths. Toho obliged.

Some genuine spy genre tensions run in the undercurrent, with something something world domination as the end goal. Godzilla sprouts whole heroism for the first time, complete with a flabby suit and flattened muppet jaw. Unconvincing or not, Godzilla brushes up to Red Bamboo’s nuclear spires, scattering their parts in satisfying miniature crunching action. Into the water, Ebirah screeches as if this tussle is of consequence before Japan’s kaiju star loses patience. Fukuda’s effects staging is listless as the franchise lost any pretense of realistic legitimacy, choosing instead for a style of hokey thrills, if no less entertaining ones.

Sea Monster is an icon for its definitive shift into series playfulness, and extracting value from the deflated budget means taking in the sprawling color or lush jungle setting. As of this feature, mini foliage and barren miniature sets were not yet ubiquitous. Instead, it’s the one where Godzilla shows affection toward a human female, scratches his nose, cooks a shaggy condor, and hits up a jig as he squashes fighter jets. In that mix, he broils seafood while an energetic cast works to stave nuclear annihilation. For it’s exhausting faults, Sea Monster’s charisma and anything goes sci-fi charms are too endearingly placed to be a disaster. 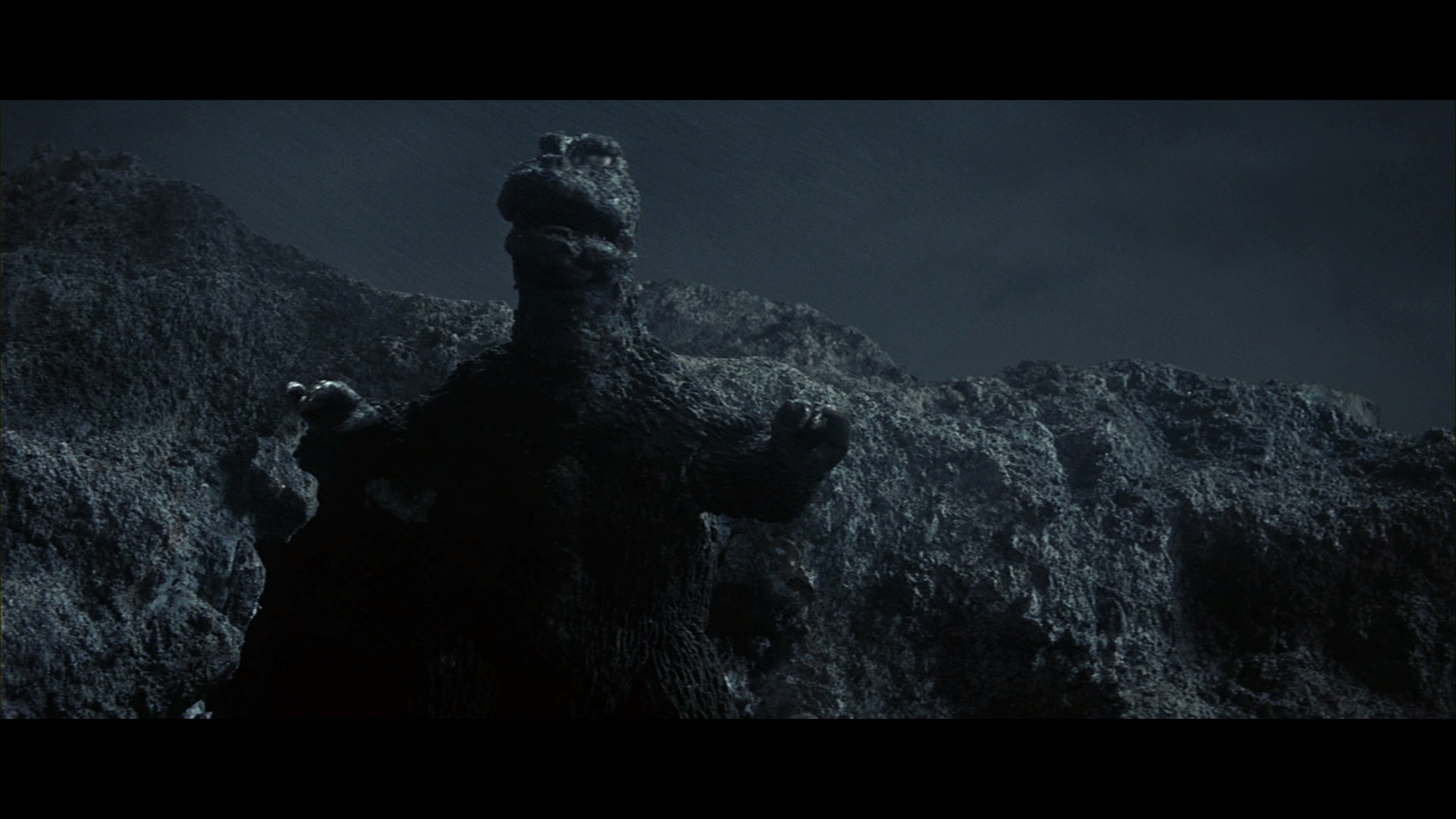 Kraken Releasing, an arm of Section 23 films, debuts here with one of three Showa Godzilla spectacles and their master is spectacular. Gate weave, dirt, and scratches remain, although condition is blissful when considerate of age and an unfortunate general disdain for the feature. Fading has been corrected and contrast properly adjusted to insert some visual vigor.

High bitrates grab the grain structure and deliver it without molestation, although there is a sense of mild processing. Sometimes sticky grain and mild smearing are infrequently evident faults, plus some harsh edge definition. Digital tinkering leaves few remnants though as fidelity jumps forward over Sony’s DVD and unquestionably so over decades old 16mm TV prints. Jungle greenery, facial detail, and monster suit textures are outstanding.

Complaints could be levied against color saturation which tends to become strikingly rich. The life vests which bring the men ashore are insanely bright, and the island meltdown which closes the feature may carry the most vivid orange on the format. Flesh tones make a break for deepened tans while enriched blue skies sit behind it all. Technicolor classics struggle to reach this level of vividness, although few will call on such a “detriment.”

The final assist is born from the black levels, absolutely beautiful and dense. Cave interiors – which play into the narrative crucially – firmly produce the richness they need without cutting through shadow definition.

DTS-HD or not, Sea Monster is smothered by incorrectly balanced elements, allowing the score to run over the Japanese dialog. Sony’s DVDs, of which these Kraken releases were likely sourced from, were hit with similar problems. Sato’s themes render many lines unintelligible and for those who wish to view without the “dubtitles,” it’s a painful mastering fault. By contrast, the pitiful international English dub has an opposing problem – Sato’s work is all but lost.

Otherwise, this brassy and lightly faded Blu-ray endeavor is passable. Loose drums miss the heft they should carry and audible dialog is succumbing to age defects. Precision is lost in a mono affair without the necessary needs to be precise anyway.

Kraken offers the original Japanese trailer, which is an absolute blast and worth watching even if you tend to ignore such bonuses. Unfortunately, that is the sole extra.