Talia al Ghul drugged and raped Batman. That’s a twist. Son of Batman exists to hyper sexualize Talia, her character design boasting ample breasts and when kidnapped, they’re flaunted for her captors as she sensually sits on a bed handcuffed. For someone with a black eye and bloody lip, she doesn’t quit.

Elsewhere, Batman is contending (and remarkably accepting) of a son he was unaware of. Damien was raised inside of the League of Shadows’ walls with Talia until he was a screechy nine year old. Son of Batman’s opportunities to pour Batman’s methodology’s and philosophies to his kin are discarded for eccentric action scenes between ninjas or Killer Croc, eventually leading to roughhousing with Deathstroke.

An addiction to anime action turns narrative physique flabby, Son beginning over a hokey G.I. Joe-like ninja scrap with helicopters, explosions, and according to the MPAA, PG-13 bloodletting. Swords pierce flesh with either Damien hacking foes or Talia reaching forward for cleavage exposure on her strikes, all to bring in Batman and Nightwing for support.

One kidnapped scientist later and Son is dealing in mutant man bats (called so as if to avoid confusion), something else to clutter this thinly animated piece. Son is overly feisty and indifferent to logic, built on established comic lore for fans if rejecting an entire cluster of female devotees with the explicit exploitation.

Outside of misgivings surrounding Talia, Son of Batman squanders excitement with blasé patches of fighting meant to draw the eye, but turns into a shambling circus of shunned fan service. Under 70-minutes without credits, Warner/D.C.’s newest snippet of direct-to-video animation is pudgy with kicks and lanky with story.

Damien is obnoxiously intelligent and an improbable fighter – even in the midst of comic level fantasy. He becomes both the rebellious teen caricature and cocky nine year old who stoutly believes he is unstoppable. Batman becomes inconsistent side dressing and Deathstroke is devastated by this characterization from the New 52. Voice acting material is of limited help. 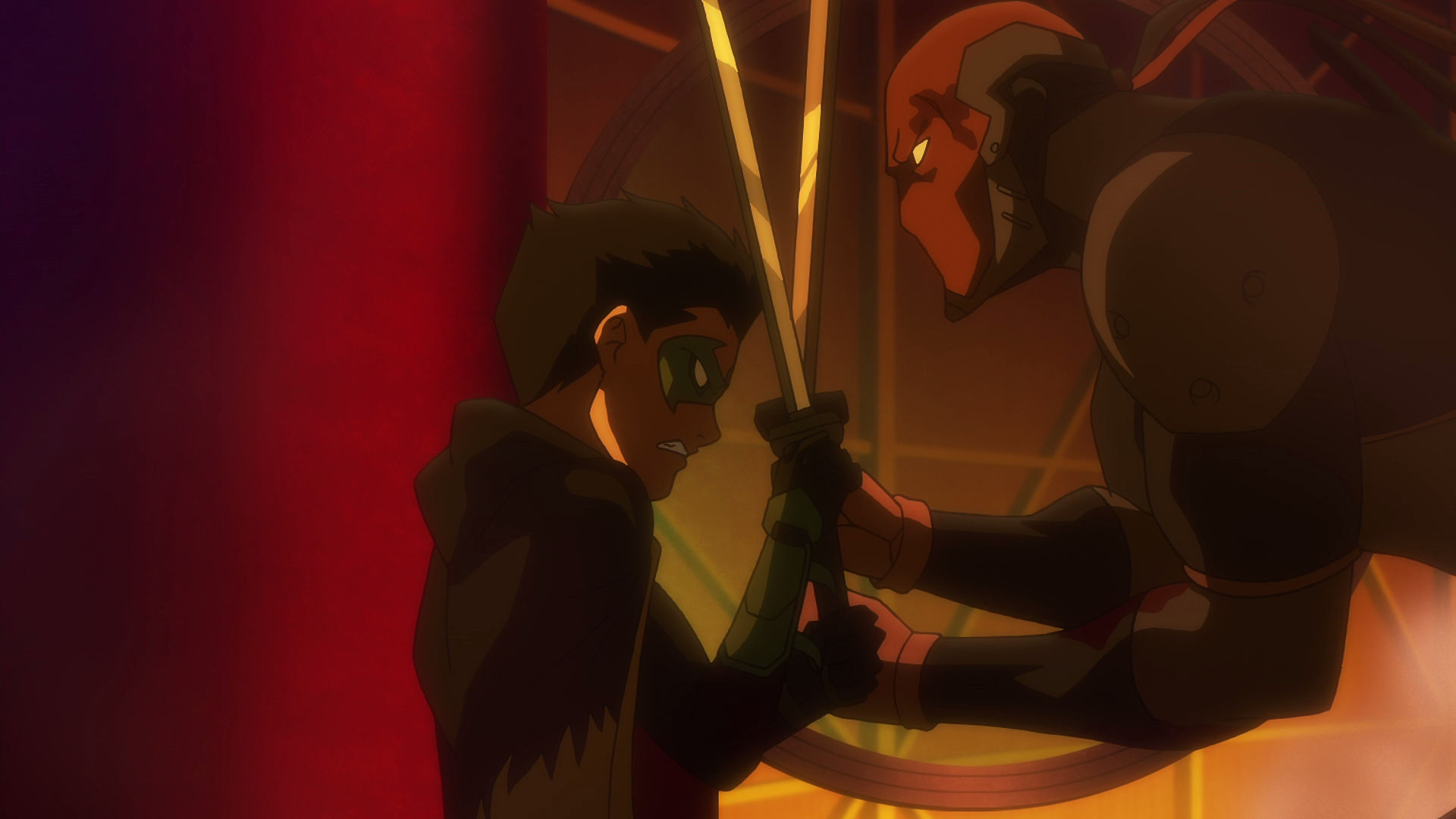 Pulled from its digital source, Son of Batman is given an encode which can readily process this simple material. Banding, which proves persistent, seems best laid on the source animation rather than Warner’s compression routines. Fleeting aliasing is but a one time occurrence.

Lines are pure and colors dense. Pulling into the Bat Cave, a map of Gotham is set up on a screen with plentiful definition in the lines. Despite distance, each road is flawlessly presented with vivid green backing. Son is typically dour with gray and muted blues, with exceptions set aside for the League’s palace and a sunset showdown at sea.

Image density is spectacular, designers showing care in applying blacks to cast Batman into the shadows. Their purity is sensational, crafting a look which rises above the video level animation.

Snippets which move away from the appearance of traditional animation, vehicles specifically, pull in identical qualities. Although motion smoothness is a distraction, their outlines are held together without fault.

DTS-HD is the managing codec, proving interesting in how unfinished the design feels. During an introductory assault on the League’s mountainside location, gunfire splits thickly into the stereos and until Ra’s ah Ghul is shown in close-up, surrounds are nullified. With the virtual camera is stuffed into his face, rears light up with activity. It is a bizarre open space in the surrounds, used elsewhere sparingly with some notable moments. Swinging around with grappling hooks (and there is a slew of grappling within this feature) will force the capture of man bats flapping their wings in multiple channels.

Explosions sit in the lower echelon of LFE push, although a rush of flames in the opening act will rush into the .1. Otherwise, subwoofer action is too dulled for notice. Audio work fits with the visual side, on a budget and capable with patches of disparity.

Bonuses are acceptable and fans can gorge themselves on historical context. The Fang and the Demon Head dips into the Son storyline’s history with 10-minutes to expunge on the topic. Strange Blood Ties is exclusively about Damien and his place in this universe, given 15 minutes to play with. Designing the Characters brings in Phil Bourassa to explain his choices and the historical context for them. Four cartoon episodes (two from Brave and Bold, one from Beyond, and the fourth from The Animated Series) are a pleasant bonus, followed by a preview for the next animated feature based on Arkham City.