Going back a few years, Veronica Mars was one of the hippest shows on television. Combining a keen sense for razor-sharp barbs and nods to film noir, the titular character won audiences completely over as the smart outsider at Neptune High. It only lasted three seasons, never garnering incredible ratings despite a passionate following, ending in 2007. The girl detective is now in her own feature film, bringing back Kristen Bell and the rest of her supporting players in a smart script that works as one long love-letter to the fans.

Murmurs of a Veronica Mars film had been circulating for years since its television farewell, especially as series star Kristen Bell had carved out a career for herself as a feature actress. Thanks to series creator Rob Thomas and over 90,000 ardent marshmallows (the term used for fans of the show), the movie was finally funded through one of the most successful ventures in Kickstarter history. Working from a highly polished script by Thomas and series veteran Diane Ruggiero, they bring nearly the entire cast back in a mystery that fans should feel comfortable with. Viewers unfamiliar with the television series will still enjoy this movie as it does work on its own, but it is clearly aimed at current fans that have already seen the show to some degree.

The story is set ten years after Veronica’s class has graduated at Neptune High. Veronica Mars (Kristen Bell) is on the verge of becoming a lawyer in New York, having moved beyond playing private investigator with her father, Keith Mars (Enrico Colantoni). She receives a desperate call from Logan Echolls (Jason Dohring), her one-time boyfriend and foil that drove so much of the series. He’s still living in Neptune, California and is the popular suspect in the murder of his girlfriend, a music star. The only person that can clear his name? Veronica Mars, the girl who got her private investigator’s license on her 18th birthday.

The first act is all about Veronica returning to Neptune and meeting old friends familiar to fans, like Mac, Wallace, Dick Casablancas and Weevil. The first hour feels like a fresh episode of the series, as Veronica goes about trying to clear Logan’s name through her usual antics of impersonating people and duping generally clueless individuals. The murder mystery heats up as Veronica uncovers a possible conspiracy at their ten-year high school reunion. It does become a more serious story as the mystery unfolds, upping the ante for everyone involved.

Everything that made Veronica Mars a witty series with razor-sharp dialogue is on full display here, from Veronica’s trademark quips to her excellent chemistry with Logan and the rest of her motley crew. I think she became such a popular character because she was always a little smarter than everyone and was entirely loyal to her friends, solving crimes through her wits and guile. It is a formula repeated in this movie that works once again. The story does throw some curveballs with mixed success. Weevil has a small, unconvincing storyline that feels like an unnecessary insertion, meant as a courtesy to include him in the murder mystery.

If you are new to Veronica Mars, the movie does attempt to help with a small recap of the series in the intro. This role that made Kristen Bell a star, probably the easiest thing to recommend for new viewers. She shines as the whip-smart detective, always quick to toss out a retort through funny voice-overs. Long-time fans will almost assuredly love this film; it perfectly encapsulates the show’s style and tone into a tidy two-hour package. 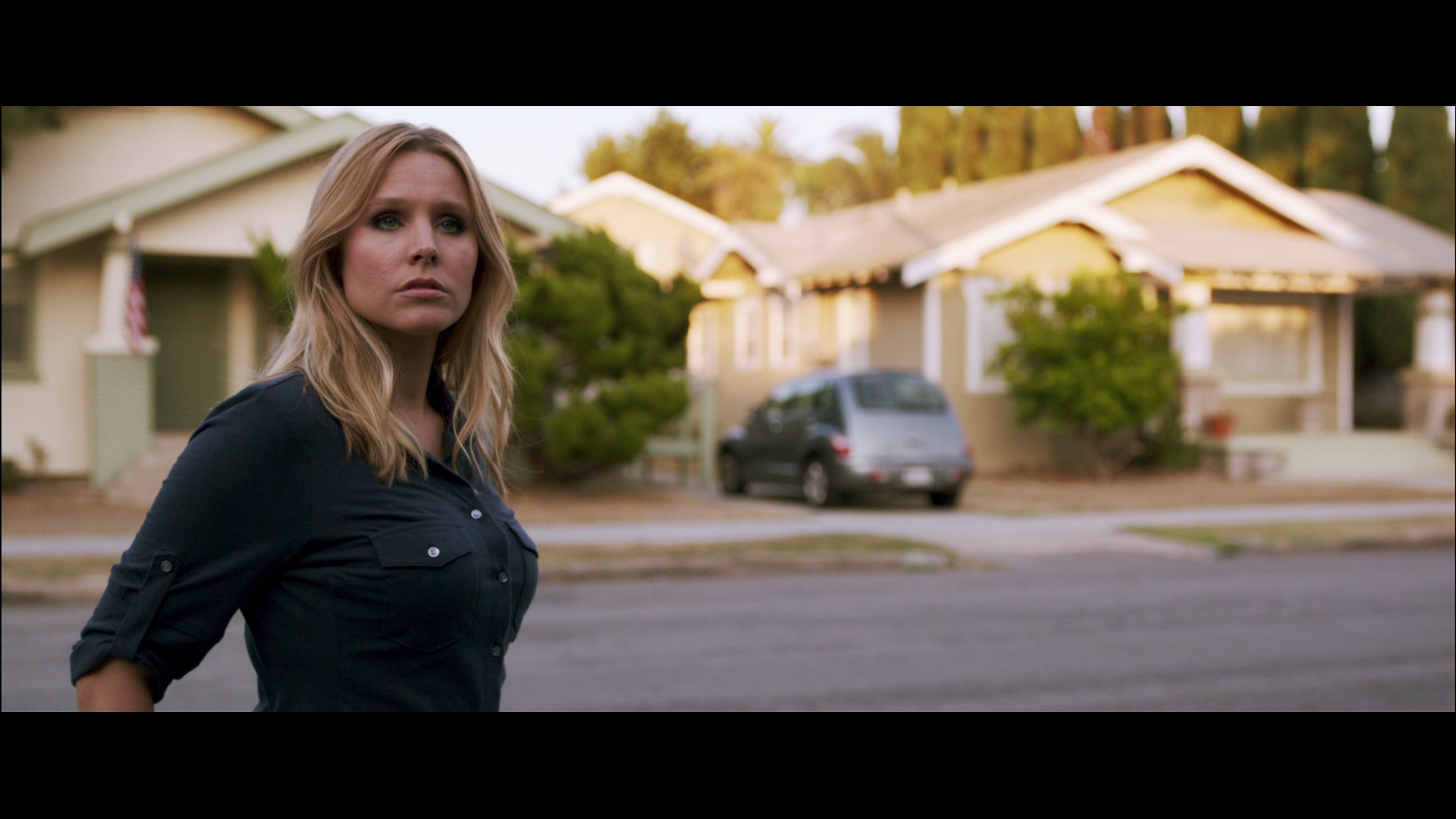 Veronica Mars arrives on Blu-ray looking quite fine in pristine clarity. The Warner Bros. release averages a solid 24.71 Mbps in its AVC video encode. Digitally shot using the Arri Alexa camera, the main feature is properly presented at its native 2.39:1 aspect ratio. Aside from a few hints of aliasing, this is a technically strong effort that directly replicates the low-budget production’s intended appearance.

The show never looked this good on television. This movie has a strong visual consistency, bringing us all back to Neptune in video quality that is striking at times.

A decent 5.1 DTS-HD MA soundtrack is the primary audio option. This is not a dramatic surround presentation, largely favoring clear dialogue that is easily intelligible. The musical soundtrack is populated by various songs and its score spreads around the entire soundfield, with occasional support by an active bass channel. A few audio cues pop out of the surround channels, but design is basic. There are no real complaints, Veronica Mars always driven by dialogue more than extensive action sequences.

A number of subtitles and dubs have been provided for international users. English SDH, Spanish, French, and Portuguese subtitles display in a white font, always remaining entirely outside the framing of the main feature. French and Portuguese dubs are included in 5.1 Dolby Digital audio at 640 kbps.

Warner provides several special features, including a nearly hour-long documentary that has some truly touching moments for a bonus feature. Most of it is more than the standard marketing fluff one gets these days, as Kristen Bell and the other actors seem truly touched by how much money the fans raised through Kickstarter to get this film off the ground.

An UltraViolet digital copy is included, redeemable on Flixster. Fans that got the Blu-ray set as a Kickstarter reward will get an exclusive DVD copy of the film. Veronica Mars on Blu-ray does not include a slipcover.

By The Fans: The Making of the Veronica Mars Movie (55:43 in HD) – Series creator Rob Thomas, Kristen Bell and the entire cast take you from its record-breaking Kickstarter launch to the first day on set and beyond. This is a documentary worth seeing, even if you aren’t the biggest Veronica Mars’ fan. It documents many of the individuals that ended up donating to the Kickstarter, including a couple of the show’s biggest fans. It’s heartwarming to see a real iPhone video taken by a female fan, when she surprises her sister with one of the exclusive reward packages that had sold out on Kickstarter.

Behind the Scenes: More On-Set Fun (All in HD) – This is a series of six funny featurettes, mostly featuring key cast members. None of them go much longer than a few minutes, but Kristen Bell, Chris Lowell, Max Greenfield and others make appearances.

Deleted Scenes (04:20 in HD) – Very minor scenes that were deleted for a reason; they add hardly anything.