Erecting one of the dopiest gorilla suits to put to film – trailed only by the torn mess in A.P.E. and the rubbery menace of Konga – Toho resurrects their version of Kong to trail Rhodes Reason as he squashes the international terrorism plot of Dr. Who (Hideyo Amamoto).

Six minutes in, Escapes is letting Who’s robo Kong replica break through the North Pole’s ice for a look at the lustrous Element X, a MacGuffin worthy of Kong’s animated facade. Dr. Who’s plotting fails, resulting in a need for the authentic Kong’s workmanship. A string of comfortable miniature venues, dinosaur drop kicks, and satisfying Tokyo squashing continue from there.

Escapes is a hokey travesty to non-Toho devotees, a clumpy dose of ’60s kitsch with America’s prodigious simian playing host. Those accustomed to Asian kaiju receive one of the studio’s mischievous adventures with a lushness in its variety. Tramping through Santa’s domain at the North Pole; uprooting trees on a monster infused Mondo Island; breaking Tokyo Tower’s steel; Escapes becomes a glutton for colorful playfulness.

Kong turns a sweet eye toward co-star Linda Miller and Dr. Who clings to the side of Bond idol Mie Hama for a bit of femininity in a genre often clouded by male superiority. Escapes clinks along with pep, engaging kids with frequent splashes of monster-dom and adults with its nostalgic modesty. A touch of hokum brings this toothy Kong suit into being courtesy of Godzilla suit maestro Haruo Nakajima, turning this escapade into a fanciful multi-national movie gesture.

Shrink down from the creatures and Escapes brandishes spy gadgetry and limited explanation technology. Toho was fond of playing to the growing infatuation of James Bond. Dr. Who hits Kong with a hypno device overloaded with colors and Hama invents miniaturized mobile communications decades before such shrinkage was possible. In Toho’s world, restraints are often few and Escapes is better for it. 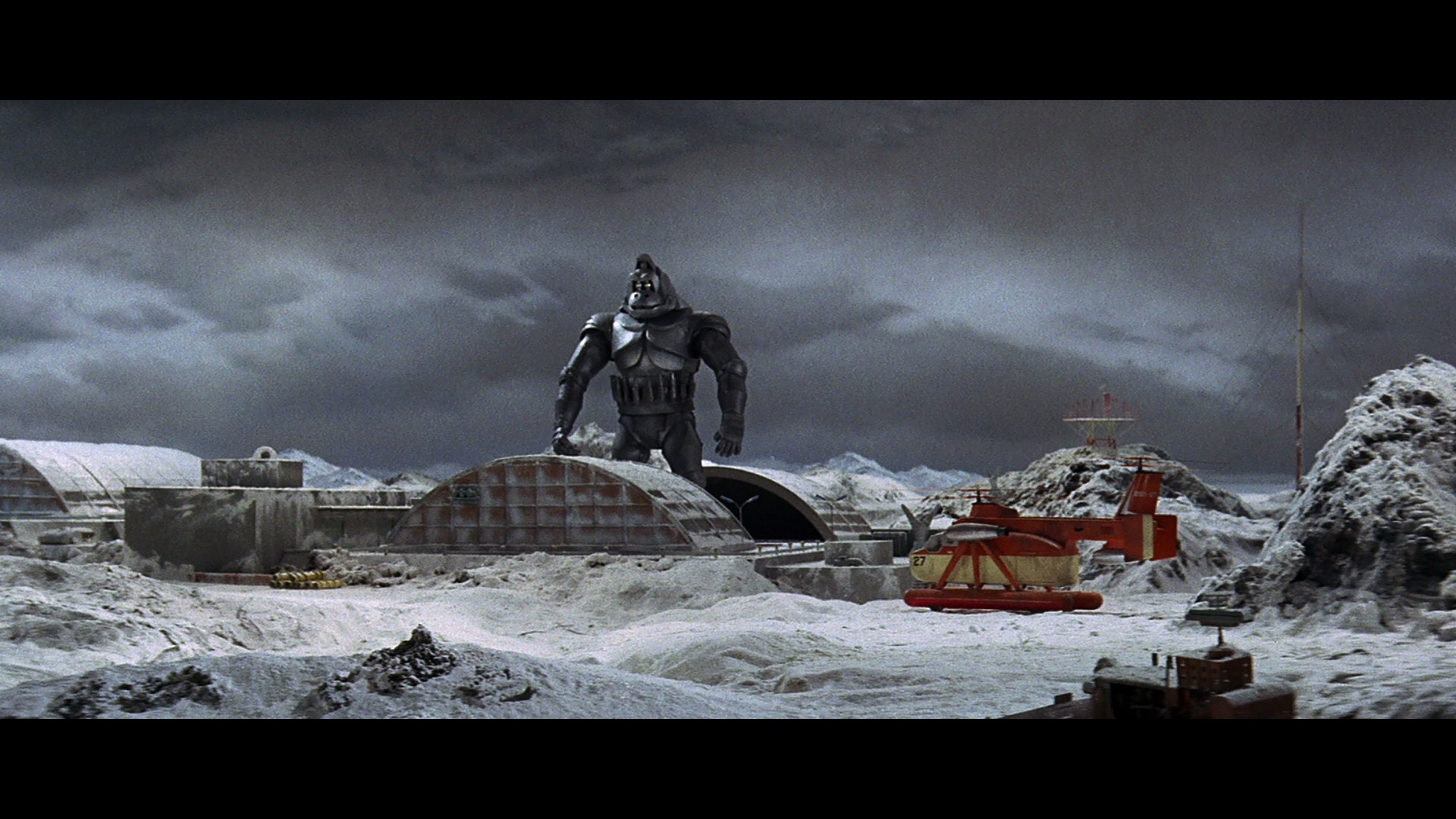 Not dissimilar to Universal’s King Kong vs. Godzilla Blu-ray, Escapes will clash with a dose of mild tampering, including some visible (if near insignificant) sharpening, plus a contrast lift. Resulting images are toughened by grain with an AVC encode gasping for air on occasion. Hard edges bring forth exaggerated patches of noise which dissipate with time.

Striking primary saturation matches the leisurely tone of the feature. Behind a slew of scratches lies an otherwise well mastered print with appreciable resolution and a color elevation. Outstanding greens on Mondo Island transition into a nighttime Tokyo romp with an availability of vivid reds.

Despite questionable tampering, the bleached whites do present ample depth when backed by spectacular black levels. A touch of detail loss on either end is workable for a film often disregarded by the studio for its eccentricities.

Prepare to deal with English dubbing only as Universal chooses not to license the Japanese original. DTS-HD 2.0 mono does well enough to keep Ifukube’s horn-heavy score intact. Accentuating drums offer a cleanliness seldom afforded to a film this mature.

Dialog delivery is precise, removed from expectations of popping or static. It’s also a notably tolerable dub which should earn it points, going so far as to match an echo inside Dr. Who’s prison cell.