Peter Jackson’s computer generated compulsions has led audiences to Smaug, a grumbling, kleptomaniac dragon who sleeps under mountainous gold in Erebor, another Lord of the Rings fictional locale which ends in “or.” Mordor, Erebor, Gondor. It’s no wonder this Hobbit tale feels overextended – half the time is spent deciphering rhyming map locations.

Smaug’s Erebornian domain is seated within a mountain, notable for its eerie resemblance to Paramount Film’s company logo. Therein lies enough reason for Bilbo (Martin Freeman) and his mismatched dwarven helpers to trot along in search of relics. The Arkenstone patches together a MacGuffin worthy of these Rings prequels, with not quite the mysticism of the Ring itself, if still peppy with its on-camera shine.

Battles commence with scarred Orcs who snarl and spit, appreciable in their disgustingly hateful brand of roadside marauding. Jackson’s as-of-yet not extinguished creative mind turns PG-13 decapitations and flagrant stabbings into hokey and jaunty action sequences, staging one within the framing of a down river barrel chase. Copious levels of CG water splash up as barrel-riding dwarfs sneer at physics to bowl over Orc hordes or let crackshot Legolas (Orlando Bloom) highlight flesh while balanced on bouncy skulls. It’s lunacy. Enjoyable and fantastical lunacy.

Desolation of Smaug is a middle child film, hung up on strings placed by Unexpected Journey and forced into There and Back Again’s hungry finale. Still, a credited four way screenwriting team proves punctual in flashback as Gandalf (Ian McKellen) mingles with Thorin (Richard Armitage) to spill exposition points, setting up on Unexpected’s tail.

For its opening breeziness, Desolation still turns into a screen hog, if not to overflowing capacity. Ample production design adds to the illogically luxurious architecture, keeping together a sense of visual pop while camera sweeps pounce on opportunity to perform lengthy showcases. Desolation chugs, but if wrought fan service grows tiresome, some green screen luxuriousness is bound to offer reprieve.

Undoubtedly, this is a set up feature which often drops any pretense of being about a Hobbit; Bilbo’s agreeably accepting mannerisms are in shadow. Gandalf is out punching the ground with his staff, Bard (Luke Evans) is shiftily wandering about town, and Tauriel (Evangeline Lily) douses dwarfs in potent healing techniques. Desolation is serving time as a set-up film and as an anchor piece wherein it commits few foul ups. 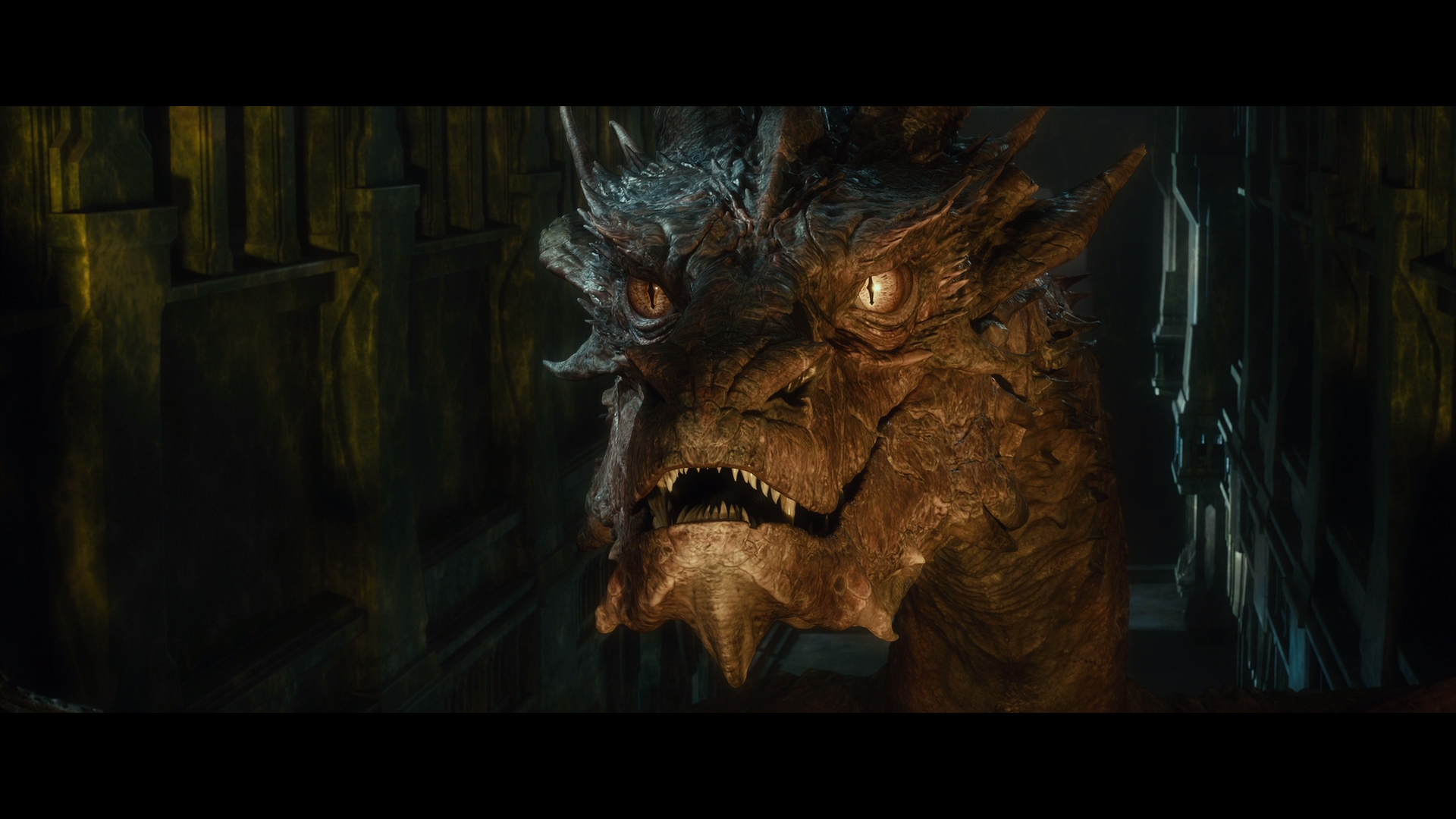 Jackson’s Hobbit series is given an extensive budgetary brush up for its glossy, expensive appearance, which is then torn down by mediocre Blu-ray encoding. AVC work is abysmal in places with visible artifacts crowding together in smoky hazes or smearing upon movement. Quality is unilaterally hung on a side of disappointment.

Often, source cinematography will extend its hand with deepened definition. Facial close-ups and some medium shots are splashed with clarity provided by digital lensing. Make-up and CG creatures prove splendid at their peaks, resolution crisp plus significant. Miniscule production design touches (particularly in Lake-town) reach for extremes. All of this is doused with valuable black levels, dependable to suit Desolation’s torrent of digitized caves. And Smaug is stunning in his scaly perfectionism.

Unfortunately this is all broken up by periods of intense clogging, where bitrates no longer flow freely. Faces turn from impeccably textured to smoothed over in a matter of edits, a ragged appearance which robs facial fidelity as often as it does scale. Complexity distributed by rows of trees are distressingly imprecise, appearing fuzzy without the precision afforded to large scale productions. Camera pull outs designed for majesty too often break apart, either victim of processing or weakening compression algorithms due to needlessly limiting space constraints. While it is easy to point and yell at this faulty footage for the Red One-based capture or visual effect coverings, all of these blemishes are instantaneously familiar to Warner followers.

Oddly, Desolation’s home video presentation personifies the title There and Back Again, wandering there into grandeur, back again to contemptible farce. Warner’s continued bottle necking of encodes is inexcusable and while there will remain indifferent casual videophile defenders, Desolation is unforgivably droopy on disc.

And what a magnificent audio operation this turned into. This bevy of eclectic action scenes produces a premium level of design work, cautiously maneuvering between seven channels with precision. Desolation’s free running barrel chase is joyous as waves kick up, orcs howl, and bow pulling slings arrows toward targets. This excitable mixing job is ever present, capsulizing Middle Earth’s miniature adventure with ambiance or action intensity.

It’s an especially keen piece of work for its Smaug dealings, clinking together pieces of gold to best maneuver the dragon around the soundfield. This entire final act showpiece is just as invigorated before Smaug’s fiery blow-up as it is during. Tension rises as Bilbo is cornered with a snaking wrap-around effect keeping the meek hero centered.

Despite contention regarding Unexpected’s LFE output, any misgivings are corrected here with ferocious impact generated by Gandalf’s slamming of his staff and hectic waves as the river journey is underway. Especially sharp is the boomy current added to Benedict Cumberbatch’s Smaug voice, rumbling with a devious current of LFE. His eventual flame spewing is no less spectacular.

Prepare for extended editions! Or rather that becomes the calling card of these fleeting bonuses, nice if limp in comparison to the eventual spill over of more premium releases. Disc one only plays host to Home of Middle Earth: Part 2, a continued look at New Zealand’s prosperous shooting possibilities for seven minutes.

Disc two is propped up by a two part journey onto the set, pulled together while shooting across these three features to make up one full day. These 40 minutes are nothing compared to the 24 hour schedule held together by this mammoth crew. A live event from March 2013 brings viewers into the editing room for a (then) interactive chat with Peter Jackson, all 37-minutes of it. Production video blogs are cut into four parts for 36-minutes of behind-the-scenes stuff, with a music video and trailers (movie and video game alike) following.

Hardcore fans have likely peered into most of these bonuses.