Elsa could make a killing in hockey rink development as Frozen’s half-villain, half-hero, a born ice sorceress with brilliant vocal cords. Capped with a crown on her 21st birthday, Elsa becomes disenchanted, slinging icicles toward the Disney Princess lines during the film’s bumpy first act… and then Olaf happens.

Olaf (Josh Gad) shouldn’t work, a ditzy side character with a superficial comedic look. Give any delusional snowman a bucktooth and marketing departments will find the allure. Much of Frozen’s character design falls inside of this safety arc, nigh indistinguishable from 2010’s Tangled.

But, Olaf is an oblivious comedic genius without fear of summer’s swelter. His fortitude only limps him smartly into background entertainment (at best) while citizens of a frozen town fend off Elsa’s towering interpretation of literal Ice Capades.

Frozen is technically Anna’s (Kristen Bell) film, a plucky and excitable heroine – again with traits linked to Tangled’s Rapunzel design. Both are locked up and baffled by their past before jumping into an impromptu adventurer mold with a male romantic interest on the side. Therein lies a touch of fairy tale familiarity as much as pre-designed box office results. Kudos however to Jennifer Lee’s screenplay to shutting down one day romances in a clever, eye winking beat down of Disney’s tropes.

Despite some flubs with regards to set-up and delivery, Frozen is studio magic, raw stage showmanship blessed with Disney’s penchant for animated charm. Decade’s after Walt’s death, audiences receive an animated spectacle without the unnecessary spark of named actors, choosing instead a squad of pros who invigorate a torrent of lively songs built on plot driving whimsey.

There is an irony in Frozen catching fire, launching directly toward the waning over saturation of computer generated material and showing how classic attributes can be infused into the digital age. Within this constant winter storm warning is a pageant of color, culled from sunsets or varied icicles. Temptations of blue and white are used softly as needed.

Snow Queen would stop and start in Disney’s canon, even into Walt’s earliest follow-up temptations to Snow White. In this modern era, where comedic timing is born through the wit of visual and scripting gags, Snow Queen is arguably better placed as Frozen. Despite crushing much of the material for a distinctive vision, the fairy tale timelessness is intact. Walt Disney Animation Studios, after a stumbling 2007 inception, has managed to outwit the pop culture infused Dreamworks. Even with technological progression, works in line with Frozen should remain enduring. 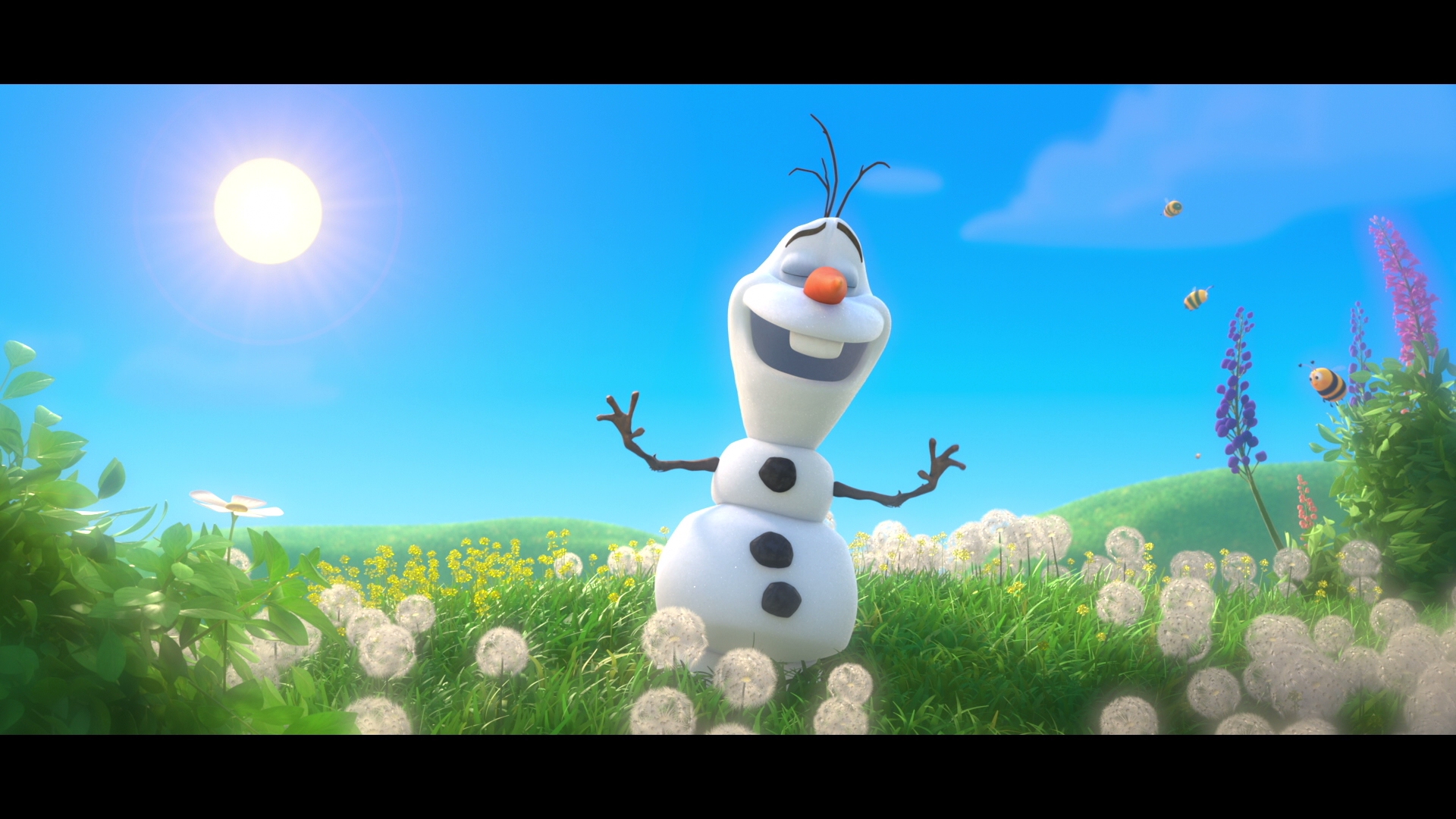 This should not convey negativity toward Frozen’s delicate style, rather celebrate these decisions. And, complexity still remains as characters rummage through snow or light refracts from icicle towers. Fur on reindeer Sven is inconsequential considering the might of this design elsewhere.

As mentioned, Frozen is a parade of color, intensifying by scene, lighting conditions, or other nominal factors. This is less a series of snow draped scenic tours than an engrossing run of primaries splashed onto screens with full digital disc intensity. Of course, the brilliance of the black levels and contrast’s allure further beckon viewers into this visual might.

However, the studio’s abhorrent disregard for US audiences with Frozen’s canned 3D Blu-ray edition is inexcusable. Despite an admitted market share roughly 10% of 2D Blu-ray, much of those lowly statistics can be tied to Disney’s own exorbitant pricing in an effort to over maintain their brand luxury. Frozen is composed for additional stereoscopic depth. Saddling an audience with a locked digital-only option is not a solution. It is a flagrant anti-consumer choice and despicable for those wishing to replicate a theatrical experience in their own home theater. We name our rooms such for a reason, but they still require appropriate high quality, theatrically accurate content for justification which Disney no longer wishes to provide.

Twenty four minutes of Frozen is made up of musical numbers, enriching this pleasing DTS-HD mix. Vocal clarity is unsurpassed with an instrumental spread bellowing into stereos and surrounds. Despite “Let it Go’s” oversaturation due to its Oscar winning provenance, this will remain the purest presentation.

Action scenes divulge the expected thumps of an oversized snow beast and rising storms are exceptionally beefy as they rush overhead. The subwoofer is not spared. Splendid use of the stereos will track dialog through doors while adding to an ice cracking effect as Elsa’s power grows. Her ice castle commands a sound premium as well thanks to a stingy echo.

When you’ve done Blu-ray critique for so long, you cringe at the “making of” feature, usually a puffy, pro-studio commercial and utter waste of time. Jump into Frozen’s expecting the same and the surprise pleasantry is too grand to ruin in text. Next to the awesome neo-vintage Get a Horse Mickey Mouse short, the making of is the disc’s highlight. Do not blindly skip this bonus.

D’Frosted tracks the feature’s winding history, dating back to the ’40s (and possible inclusion as a ride at Disney theme parks) before finally hitting screens last year. Deleted scenes are introduced by directors Chris Buck and Jennifer Lee. Fifteen minutes of music videos are all “Let It Go” by various artists. Apparently, the other songs in the movie are not worth the time.