Director Wong Kar Wai’s first Chinese-language feature in eight years had been anticipated for a long time by anxious fans, as the acclaimed Chinese director had been known to be working on a biopic about Ip Man. Ip Man has become somewhat of a folk hero recently in Asia, his life being the basis for the popular Ip Man franchise starring Donnie Yen. Wong Kar Wai has entwined the tale of Ip Man’s life with martial arts philosophy in a lush, visual masterpiece. The Grandmaster is a martial arts movie more akin to ballet than UFC match, a stunning tour de force of poetic movement that raises the bar for the entire genre.

Martial arts enthusiasts know his name, Ip Man (Tony Leung) was the legendary Wing Chun master that taught a young Bruce Lee in Hong Kong before he became an international icon. The Grandmaster opens before the Japanese invasion of China, in the city of Foshan. More than merely Ip Man’s life, the narrative is built around the conflicting styles of martial arts found in China of the period. There is a great divide between the various martial art disciplines of the North and the South. Ip Man is the Southern hope of Chinese martial arts in 1936. A rival master from the North, Gong Yutian, engages in a friendly rivalry with Ip Man’s Southern allegiances in Foshan. Gong Yutian is getting older and recognizes that Ip Man is the future.

Gong Yutian has a daughter as skilled in martial arts as Ip Man, Gong Er (Ziyi Zhang). Due to societal conventions, she is not allowed to take his spot as grandmaster of their clan due to her gender. That honor goes to Ma Sen, Gong Yutian’s hand-picked male successor he raised as his own son. Gong Er meets Ip Man and the two immediately recognize their mutual attraction.

Sadly their fates are not in alignment. Ip Man is already married and has children, while Gong Er is engaged to another man. Their love goes unfulfilled when the Japanese invade Foshan and Ip Man loses everything from his once opulent lifestyle. To provide for his family, he moves by himself to Hong Kong. When China closes the border to Hong Kong in 1950, Ip Man is completely cut off from his family for good.

Ip Man does the only thing he knows and opens a Wing Chun school in Hong Kong, quickly distinguishing himself in a very crowded field. Gong Er herself has ended up in Hong Kong, becoming the doctor her father had wanted and forsaking her martial arts training. We learn of very tragic events in Gong Er’s past that come to light, concluding any chance of romance with Ip Man.

Gong Er has a dramatic confrontation with Ma Sen, her father’s old pupil. It is a stunningly choreographed fight by famed martial arts choreographer Yuen Woo-ping, the Hong Kong legend behind fight sequences in The Matrix trilogy and Kill Bill. Every martial artist in this film moves in fluid waves, practically redefining what Hong Kong fight action should look like on screen.

Every film by Wong Kar Wai has been a thing of beauty and The Grandmaster is no exception. The action is a graceful display of power and melody meant to punctuate the major events in Ip Man’s life and his tragic love for Gong Er. It is the first can’t-miss movie to hit home video in 2014, especially for anyone with an appreciation of martial arts or Hong Kong cinema.

The Weinstein Company courtesy of Starz/Anchor Bay give us the 108-minute U.S. theatrical version on Blu-ray. Wong Kar Wai is known as someone that likes tinkering with his films well after their debut. The version intended for the Hong Kong market ran 130 minutes, missing from this BD. You’ll have to import the Hong Kong disc for the longer cut, though it is not really an apples-to-apples comparison. Some scenes in the U.S. version are altered or missing in that longer version, so it’s not completely a case of everything from this cut remaining intact. The longer cut does fill out more details about the rival martial arts schools. The U.S. version flows well and the lack of more footage does not impact its innate appeal. 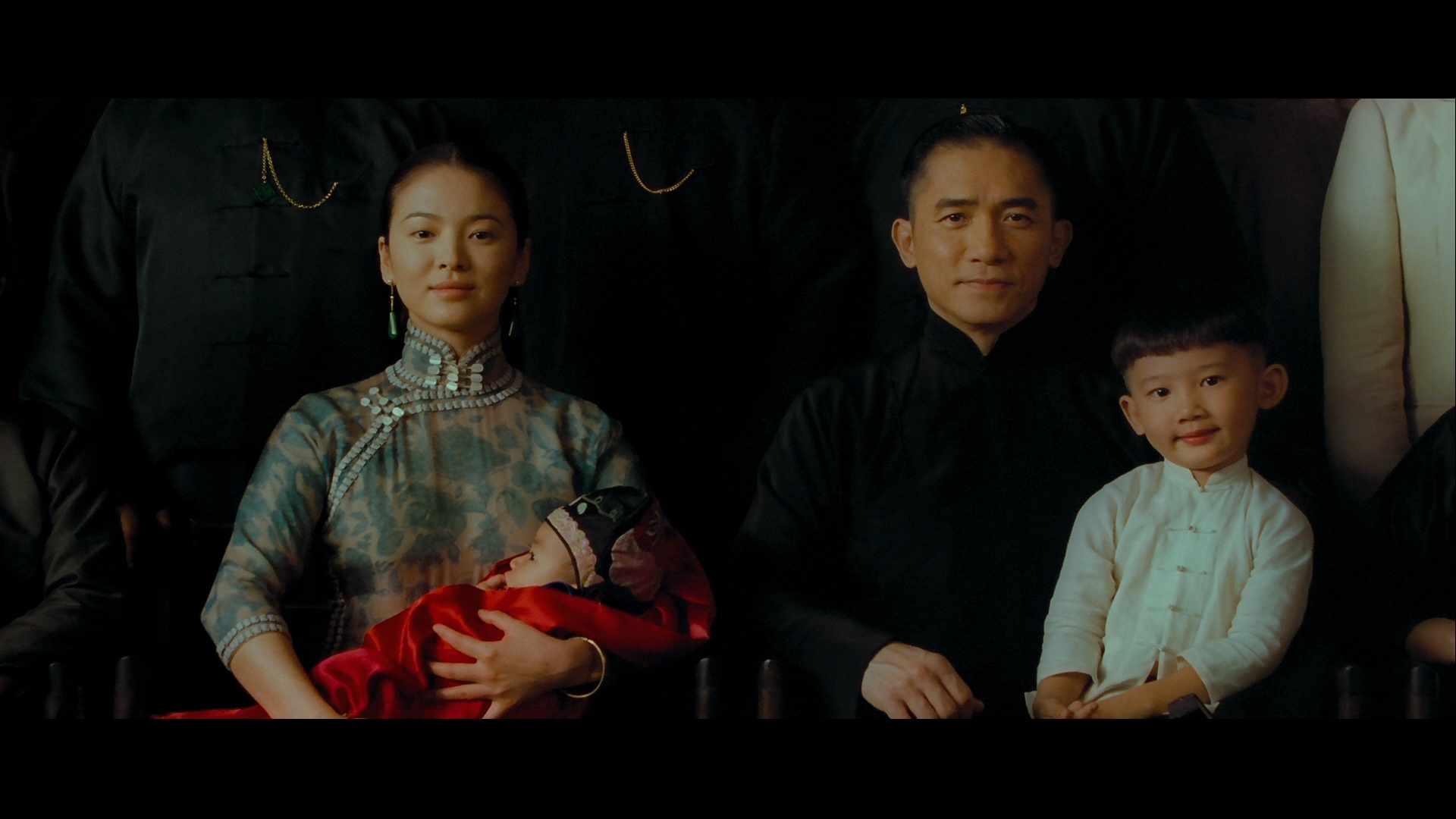 Presented in 1080P resolution at its intended 2.35:1 aspect ratio, the video quality merits merely an average score despite gorgeous, Oscar-nominated cinematography by Philippe Le Sourd. Wong Kar Wai’s films are usually exquisite in their precision and lyricism, doing things with light and color at a virtuoso level. The Grandmaster continues that tradition in fine fashion but the film has its problems on Blu-ray.

Certain scenes and shots appear to be content sourced from inferior equipment or poor handling. A production made in Hong Kong, the gritty cinematic texture often becomes smeared and oily for lack of a better description. The film does use a bevy of tricky editing techniques and elaborate action photography, possibly leading to the occasional problem seen in the soft and hazy moments. A couple of shots look strangely taken from SD, creating a stark contrast when the scene cuts back to the sharper Hi-Def film.

The AVC video encode, despite parameters averaging nearly 30 Mbps, produces minor banding and compression noise in the roughest scenes. Some of the grain has an oddly digital sheen to it, though darker shots get overwhelmed at times with noisy black levels. It is definitely unavoidable for viewers when Ip Man fights various masters in the Gold Pavilion’s darkened interiors.

The Grandmaster still produces the occasional moment of intense detail and razor-sharp imagery, lit in a beautifully-saturated glow. The rain and snow scenes have outstanding depth, creating an illusory 3-D feel. Everything was shot in this film for maximum emotional impact, less concerned about the finest video quality than some other action films. I don’t think this transfer has been overly processed by boneheaded technicians, but there are clear source issues that may or may not be inherent to the film as constructed. There is definitely room left for improvement in a number of scenes and transitions.

The Mandarin 5.1 DTS-HD MA soundtrack is a show stopper, effortlessly integrating bone-crunching fight sounds and other immersive elements into a delicate musical score. The score features sweeping, operatic music by Ennio Morricone and others, a tasteful back-drop for the period drama and intense martial arts action. Projecting a deep soundstage with precision and subtlety, this is nearly a reference audio experience for surround listeners. Low-end power comes through with authority, enhancing the flawless fight choreography as kicks and punches connect for maximum damage.

It should be mentioned the Hong Kong Blu-ray does include a dedicated 7.1 surround mix. That would have been nice to have on this disc but so few can really utilize that many channels.

A secondary dub in English is included in 5.1 Dolby Digital at 448 kbps but almost all fans will want to watch the native Chinese-language soundtrack. Optional English, English SDH, and Spanish subtitles display in a white font. They remain inside the scope aspect ratio at all times.

Let it be said that this Blu-ray features some of the best and deepest supplements for a new theatrical release in eons. The main behind-the-scenes featurette is possibly the best I’ve ever seen under thirty minutes, exquisitely put together by someone with true talent. The featurette focusing on Wong Kar Wai’s research into the various Chinese martial arts schools is must-see stuff. They pulled in some very big names on this set of supplements, including people totally unconnected to the movie like Keanu Reeves and the Rza. The whole bunch go far beyond the typical Electronic Press Kit stuff found on Hollywood films. The three trailers precede the main menu and can be skipped.

The Grandmaster: From Ip Man To Bruce Lee (23:01 in HD) – Who isn’t in this fabulous look at the movie? Besides the obvious cast and crew, outsiders like Keanu Reeves and Elvis Mitchell (movie critic) are included to give a different perspective on Ip Man and the film. They even got Gina Carano to host the documentary-like featurette, which moves along at a nice clip. Tony Leung apparently had no martial arts training before appearing in this film.

A Conversation With Shannon Lee: Daughter of Bruce Lee and Sister of Brandon Lee (06:55 in HD) – Keeping her father’s legacy alive, Shannon Lee discusses his Cha Cha dancing championship (who knew!?) and struggles with being partially Caucasian as a young martial artist in Hong Kong.

The Grandmaster According to the Rza (05:23 in HD) – A very sick Rza (suffering from a head cold), the musical mastermind behind the Wu Tang Clan, shares his love of the film and martial arts in general.

Behind The Scenes (50:32 in HD) – Broken down into seven separate sections, these featurettes are presented in Chinese with English subtitles. The first two parts are fabulous looks into Wong Kar Wai’s preparation for the movie in China, as he studies the various martial arts styles and visits different places.