Jamesy Boy tells the true story of James Burns in dramatic form, a product of the institutional system from a young age which landed him in prison. It weaves in Burns’ troubled youth with his experiences as a juvenile thug. The drama attempts to be moving but relies heavily on a host of stock characters, from a well-meaning but tough prison guard, to an older inmate that provides guidance to Burns.

Jamesy Boy is perfectly watchable but ends up being largely forgettable entertainment for experienced film patrons. Director Trevor White shows a glimmer of real talent with a complex narrative structure and flashy craftsmanship, but these characters have all been lifted from better movies.

James Burns (Spencer Lofranco) is a baby-faced fourteen-year-old. Having trouble with fitting in at school from an early age, the troubled youth has already been in and out of institutions by his high school years. Things finally hit a breaking point when a public school denies him entrance for his past history of anger problems and juvenile delinquency. James’ mother is heartbroken, played by Mary-Louise Parker in a small role for the actress. She struggles to get control of the troubled teenager as James drops completely out of school.

He starts hanging out with local drug dealers due to the influence of a girl he meets in his neighborhood, Crystal (Rosa Salazar). Crystal introduces James to Roc (Michael Trotter), a local thug into gang activity. James quickly takes to Roc’s criminal gang, becoming a critical part of his crew during his early teen years.

James’ personal fortunes quickly change after a felony conviction, getting sent to prison. James has run-ins with a tough prison guard played by James Woods. The guard recognizes potential in James as a man but pressures him to save the life of a fellow inmate, by snitching on the inmate that shanked James’ friend. James begins to realize there is more to life than his current predicament with the insight and guidance of a fellow prisoner, Conrad (Ving Rhames).

Conrad is in prison for a life bid but the older inmate reaches out to James, giving him hope that there is a life waiting for him outside of prison. There is some emotional texture added to James’ character through poetry he keeps in a journal. It feels tacked on at times and stereotypical of the sensitive gang archetype.

Jamesy Boy has a fairly slick narrative, cutting back and forth between James’ current incarceration in the present and his backstory in the past of how he arrived in prison. It is a flashy storytelling device that covers up for the lack of truly memorable characters, other than possibly James himself. Lofranco acquits himself quite well for a young unknown, handling the burden of lead actor with some distinction. He does look awfully young in the role, even when he’s older and has supposedly been in prison for a while.

So much of the story is set in James’ past that a young-looking actor was probably necessary. The other veteran actors all give fine performances, a tad short of their best work. Woods brings his trademark intensity to the role of a tough prison guard, though it’s a stock character pulled out of a dozen prior prison films.

Some intense moments occur in the first half of the movie before you realize where the story is going. As the plot clips along in both the present and James’ past, the formula becomes too apparent. Few surprises are left by the end, when we get a nominal feel-good ending. This is derivative entertainment competently made by talented people. Fine for a single viewing on a lazy Sunday afternoon. 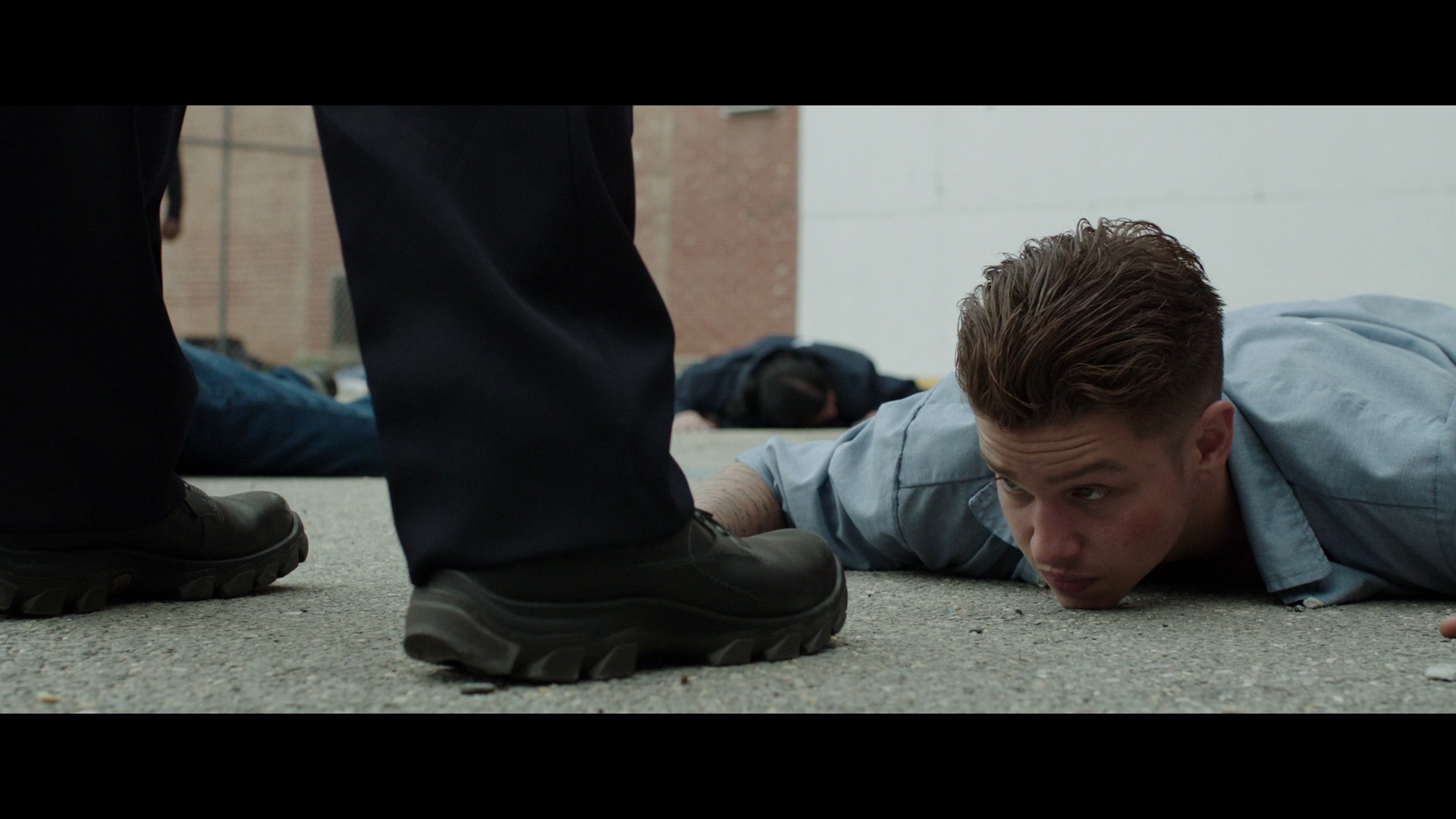 Jamesy Boy arrives on Blu-ray in a handsome 1080P presentation. Courtesy of Phase 4 Films and XLRator Media, the 109-minute movie comes on a BD-25 in an AVC video-encode. The average video bitrate is a satisfactory 20.02 Mbps. One wishes it had better parameters but the digital footage is ultra-clean, leaving very few artifacts behind.

Shot on the Arri Alexa digital camera, this 2.39:1 framed movie looks wonderful on Blu-ray. The purity of its digital footage is untainted by problems, featuring perfect contrast and razor-sharp definition. For an independent production, the digital cinematography is startlingly pristine with excellent black levels.

Intense levels of detail and other high-frequency content fill the screen, from subtle facial textures to the grim interiors of prison. The clarity is impressive, if just short of actual reference video in 1080P.

The digital transfer is free of processing, taken straight from the Digital Intermediate. The palette is ever so slightly bleached.

Some of its independent roots start manifesting in a weak 5.1 Dolby Digital soundtrack at 448 kbps. Yes, this Blu-ray lacks a lossless soundtrack, a huge no-no in 2014. There is little true surround activity in terms of directional cues. Jamesy Boy’s score and musical landscape is dominated by Rap and other urban songs.

Most notable about this mix is the low volume output, forcing listeners to set levels above reference. Dialogue is presented in clean fidelity but even action is punctuated by surprisingly weak subwoofer action.

No subtitles have been included. A French dub at 5.1 Dolby Digital is the secondary audio option.

Some brief cast interviews, a bunch of trailers, and the director’s commentary are the sum total of supplementary features. Most of the stars in its cast appear but their answers are incredibly short, aside from James Woods. The commentary is mostly the director reminiscing about each scene’s production, which gets somewhat tedious and boring. This is not a compelling set of special features, lacking any input from the man whose story is the basis for the film.

Trailers for Dark Tourist, Assault On Wall Street, Crave, and The Baytown Outlaws (06:31 in HD)