Planes is as lifeless and soulless a manufactured product as those issued during Michael Eisner’s Disney tenure in the 2000s. Home on the Range has more credibility.

This is Cars without the vividness, touch of magnificence, and (forgive the pun) driven energy. Within five minutes, Dusty Crophopper’s (Dane Cook) story has drooped to the level of Disney Channel fare, better fit for animated television in half hour chunks. Simple and ill-considered character designs instill none of the cleverness brought over from Pixar’s creative heft. Potential spin-off products Trains or Boats – given audience teasing glimpses in this threadbare feature – are now locked to this abhorrent lack of ingenuity.

Spun up from a floor covered with the profits of Cars, Crophopper’s uninteresting domain is of the cringe inducing, recycled ‘believe in yourself’ mantra. Planes can only host a singular conclusion as a result. By comparison, Lighting McQueen’s civility lesson in the anonymous internet era was of relevant importance. Crophopper’s can be pulled from better material: film, book, music, or otherwise.

Dane Cook’s bored exclamations are typically whoops and hollers as Crophopper swoops through clouds, overcoming a fear of heights which again can only spin this sloppy seconds story one way. He is joined by “Not Mater” Chug (Brad Garrett) and veteran of disrespectfully renamed World War II battles, Skipper (Stacy Keach). There are a number of naming groaners, including Brent Musburger becoming Brent Mustangburger or the Lucha Libre coined El Chupacabra… because he’s Mexican you see.

This film is an immediate flatline of budget restrictive animation, drooping dialog, and dire lack of whimsy. Three writers committed themselves to crafting this grumbling monster, one of them John Lasseter who should of had the sense to leave this dying in the stages of conceptualization. Planes never has the hooks of excitement or thematic emotion to lean on, purposefully safe as to protect an inevitable toy line.

DisneyToon Studios, the second tier corporate namesake responsible for this inclement money sucker, is often of slim consequence. This specific Disney arm slaughtered the classical soul of the ’90s renaissance with direct-to-video sequel slogs based on Little Mermaid and Lion King (amongst others). They also dump an endless clump of Tinkerbell specials aimed at the profitable Princess line. Giving DisneyToon Planes for theatrical consumption shows the inherent confidence in this project – or lack thereof rather.

Audiences should be smarter, but no one can blame kids as colorful machines strut across TV with familiar replicas of Cars’ ingenuity. Little ones never know better, which is why Planes is being further exploited in a sequel, because capitalism. 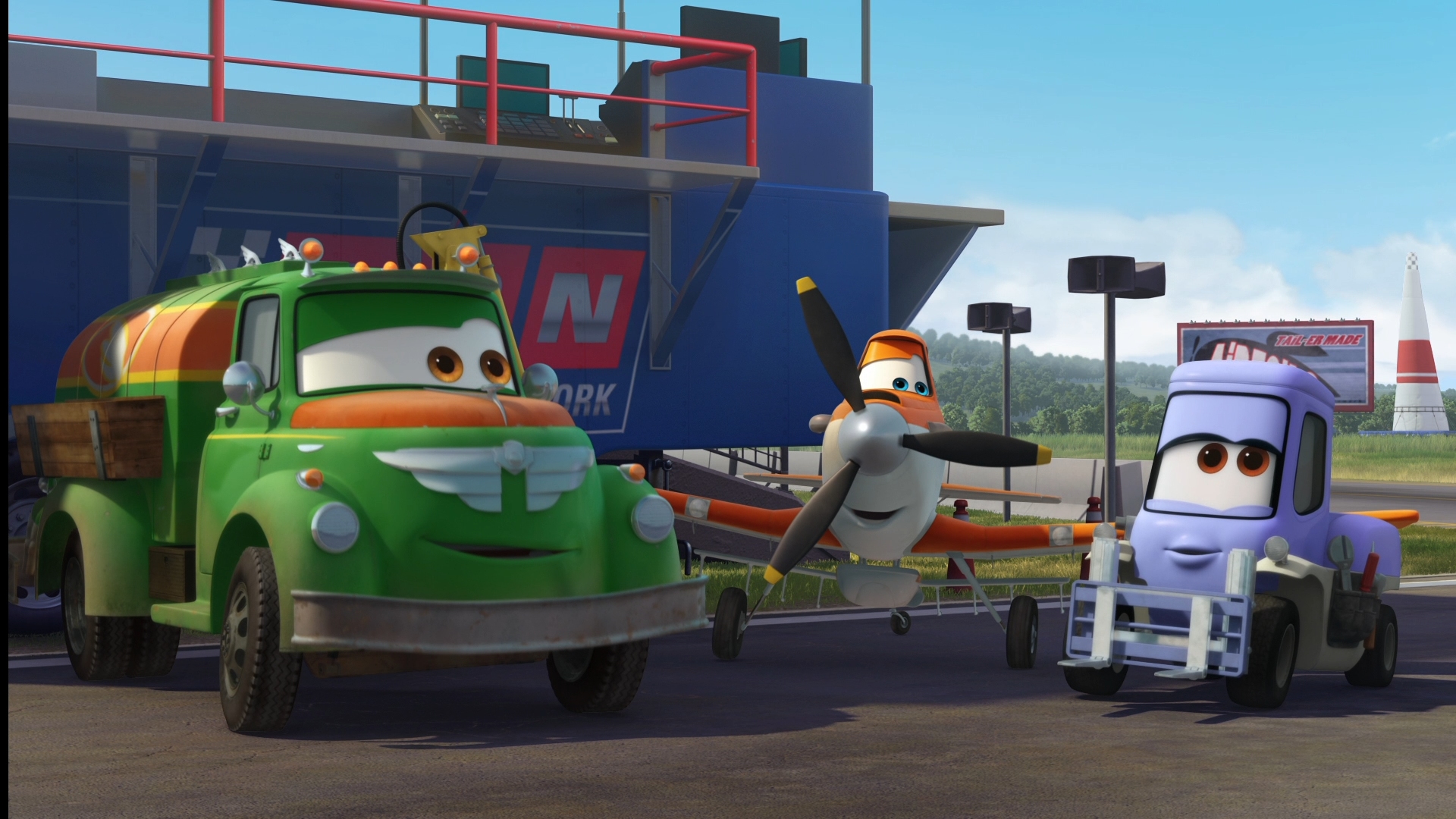 Despite carrying second tier animation, Planes is conducive to the regular, regurgitated spectacle of CG work on Blu-ray. This is a format which could be visually indebted to Tinkerbell features given their clarity, so Planes is an instant video lottery winner. The only noted flub was aliasing on train tracks.

Planes could be docked for simplicity. It has neither the spunk or effort displayed in its brother franchise Cars. Elements such as reflections and texture are plainly applied. Backgrounds are flattened and challenging sights are few. In opposition to those complaints is an AVC encode with vigor, handling high-speed motion and complex confetti/weather effects without blocks of compression seeping in.

Color, contrast, and black levels are herculean in their quantity; no one will doubt this is still a Disney disc. An injection of variety passes through cornfields, the arctic, Asian landscapes, and into the heart of New York. All earn their spectacle badge even if they flounder compared to rival animation. It is all beautiful in a simplistic sort of way.

Disappointing is stereoscopic work, apparently caught in the budgetary constraints. Flight sequences are dulled by their lack of background extension with little attention paid to foreground. There remains a question if certain shots are in true 3D at all. Compositions barely suit the technology once free of the opening frames.

It takes a draping of confetti or heavy snow to sell the effect, done well in appreciable layers. Plane noses will poke a touch without breaking the front visual barrier. Planes is inset despite opportunity in the material to astound. Application reveals the slimmest aggression. This 3D version feels like an unfortunate afterthought when it should be a highlight disc.

Strong placement within this DTS-HD 7.1 mix will raise Planes up over those 3D deficiencies. Aircraft swoop overhead or “jet” into stereos efficiently. Overhead effects are stupendous. Passing engines also brush by the LFE for a jolt of mechanical fury.

Key action scenes whip up winds amidst a snow storm and outstanding waves during a hurricane. Dropped into a stormy ocean, water rushes up to fill the soundfield for full envelopment. Starting lines during this worldwide race capture the cheers of onlookers while PA announcers spread across stadium speakers. If anything in this film was handled delicately, it was audio mixing.

Slim extras are inbound, beginning with a musical scene before transitioning into Klay’s Flight Plan, which reveals a director excited to work with animated aeronautics. Eight minutes of deleted scenes are followed by brief character rundowns. A top 10 list of real word flying legends ends the disc without fanfare. In total, 35 minutes of bonuses are offered without a tinge of excitement.