Thanksgiving is not a total loss post-Free Birds. While young ones may freak over the idea of shredding Reggie and Jake’s flesh in honor of thanks, at least we can have pizza.

See, Reggie (Owen Wilson) and Jake (Woody Harrelson) are out to stop Thanksgiving. They’re turkeys; it’s logical they see things differently than us. They discover a government outpost with a time machine and zap themselves back to Plymouth Rock for a rather grim depiction of the first Pilgrims. Save the first Thanksgiving, and turkeys no longer worry about their inevitable beheading – or so goes this loose time warping tale.

Kids, who undoubtedly soak up this feathered tale, will probably scream at the sight of scorched birds nestled between colorful décor as family gleefully cuts away portions. “That’s Reggie!” they’ll proclaim. The solution is vegetarian cheese pizza. Through a hackneyed series of events with the flock reject, Pilgrims delight in free delivery bliss. Hollywood is merciful by avoiding a wobbly tofu bird as the solution.

In-between it all is a story of unwanted camaraderie as Reggie is swept away from his life as a Presidential pardon by a panicked and paranoid Jake. Challenged mentally, Jake somehow knows of government secrecy despite Free Birds’ plot being explicit in depicting the stupidity of turkey-kind.

Tensions boil as early American turkeys prove to be the passive bunch, Jake clashing with their brutish leader and Reggie falls feather over toes for a quiet female. High energy clashes with a brooding hunter named Standish (Colm Meaney) add some pizazz to a film nearly falling asleep on itself.

Free Birds needs its time machine to warp itself back to the crumbling animation landscape of the early 2000s. As Disney imploded (with the framework of Pixar holding them afloat), Fox’s semi amusing holiday feature may have scored. Kids are manipulated gluttons for this stuff while parents whimper at the prospect. The concept of cobbling together kooky birds and placing them in pressure scenarios has drifted from its sell by date in 2014.

There is enough color and leveraged adorableness in Free Birds to squeeze by, manufactured into a framework kids should delight in. This is harmless free range adventure for everyone except turkey eating adults who allow their kids access to Reggie’s plight. Hope you like pizza. 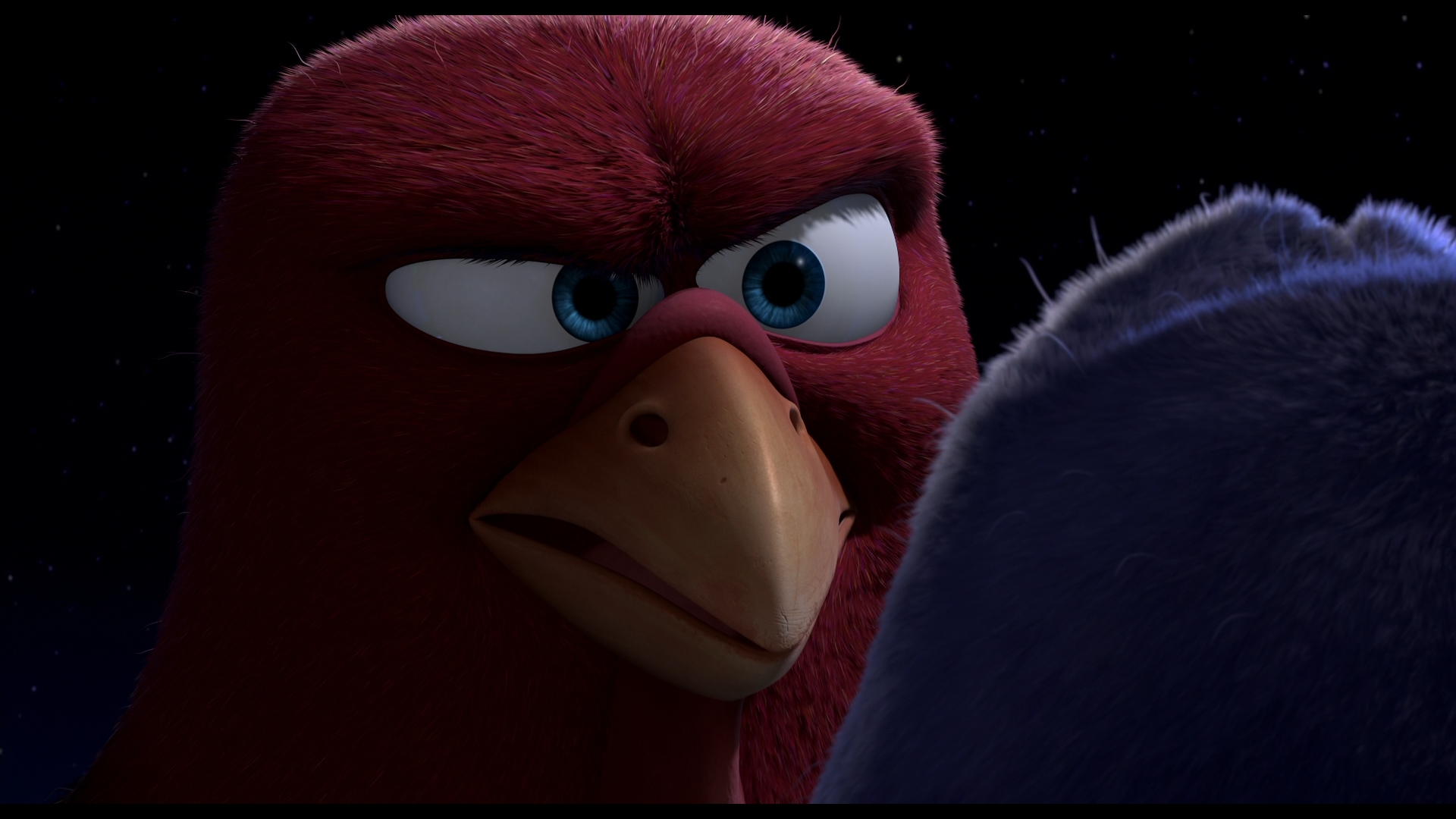 Free Birds is a stress test for television black levels, pouncing on the deepest, richest animated blacks as it delivers pristine nighttime or underground interiors. Depth produces zero loss in the absence of light. Purity is substantial and reaches down to pure black without fear. Beams of moonlight or flame add punch.

Despite being animated on a (relative) budget, Free Birds is punctuated by feathers and essential backgrounds filling with splendid color. Grass and trees are meticulously sharpened to a point. Feathers in close harness resolution to establish a base of fidelity. Even human characters are given stubble or wrinkles.

While its dour use of Pilgrims may snatch primaries away, much of this feature is heavy on saturation. Leaves are set in the fall season with an array of oranges, yellows, and browns. Grass is brightly done and turkeys work in their own color patterns, from Reggie’s blue face to the warrior’s varied war paint. The level of showmanship and pizazz in this imagery pushes Free Birds into a crowded animated fray.

Encoding on Fox’s part is flawless, heeding Blu-ray expectations. One flub is not even part of the film, rather an opening logo which reveals an instance of stair stepping. Banding is free to inflict its wrath elsewhere too, leaving this disc a free bird (sorry).

With the backing of DTS-HD, the audio side of this disc will over perform. Boomy LFE is appreciable and frequent. Flames become common whether streaming from flamethrowers or set off by gunpowder through underground caverns. Dynamite too will create enjoyably bumpy audio. Also spectacular is the time machine spin-up and war drums as turkeys make their march toward the Pilgrim colony.

Surrounds? No worries. This disc has not betrayed positional channels. Voices wander on occasion from the center, while action lifts up to poke itself into stereo or surround speakers. Lightning and fire alike are exceptionally tight in their envelopment. Free Birds misses no opportunity and keeps itself active.

Thin extras do not make for a full meal, rather a small portioned dessert. A short school play shows the version of history in the film were it real. Animating Free Birds: The Main Course dissects a specific scene through its processes, featuring those who work on each part. Winging It: Animators in Action details the process of capturing human actors performing the film to better plan ahead. Talking Turkey chats with the composer about dealing with animation as opposed to live action. Trailers are left, creating around 16-minutes of stuff to watch.