Derelict satellites have been jettisoned from their orbits. Errant Russian missiles meant to casually bring down exhausted equipment have scattered a debris field which is now on a collision course with the International Space Station. On board? Fidgety Ryan Stone (Sandra Bullock) and veteran space walker Matt Kowalski (George Clooney), conducting a run of repairs while in direct line of the metallic hazards careening toward them. Jettisoned from their safety rigs and anticipating an impending return orbit of the now increased debris, the pair makes a desperate bid to reach foreign craft which may contain healthy escape pods.

At times, Gravity is empty. It appreciates space for its quiet and uninterrupted solitude, the duo aimlessly drifting over vivid sunsets on the surface below. Elsewhere, Gravity is relentlessly fierce, puncturing holes in space stations for gripping and sharp visual effect set pieces. Disaster movie maven Irwin Allen would be astonished by this exhilarating display of cinematic wrath, tantamount to marketable, “edge of your seat” jargon. Generic and overused, but few films envelope themselves to such a level as to pull an audience forward. Gravity does. There is a balance of near silent composure, aggressively dislodged into masterfully employed tension as physical and mental breakdowns occur.

Cuaron is gifted with a technical tapestry of a wholly modern film. Cinema has been endowed with sound for 80 years, but modern splashes and intelligence regarding the approach have never been so vigorous. Space is often used for laser blasts or bombastic science fiction. Here sits Gravity’s sound deployment, which replicates the human touch. Sound does not bounce in space, but rather in the heads of its characters. Simulated vibration depicts a drill above Earth’s atmosphere, and jet fuel hisses almost silently.

What proves staggering is the sonic enormity of Gravity’s explosive highlights. Without traditional aids, the film treats its audio with Steven Price’s dominating, splashy score. Gravity becomes a near mute endeavor with better sonic capabilities than Michael Bay blockbusters. No explosions necessary.

For its bundled impetus of digital tools, Gravity develops an internal awareness of its characters, building their motivation for narrative completeness. The film is nothing without human level perspective and realized characters driven by the cautiously used exposition. Gravity is ultimately a film of shared anxiety between two stranded astronauts and an audience willingly embedded into their unimaginable drama. 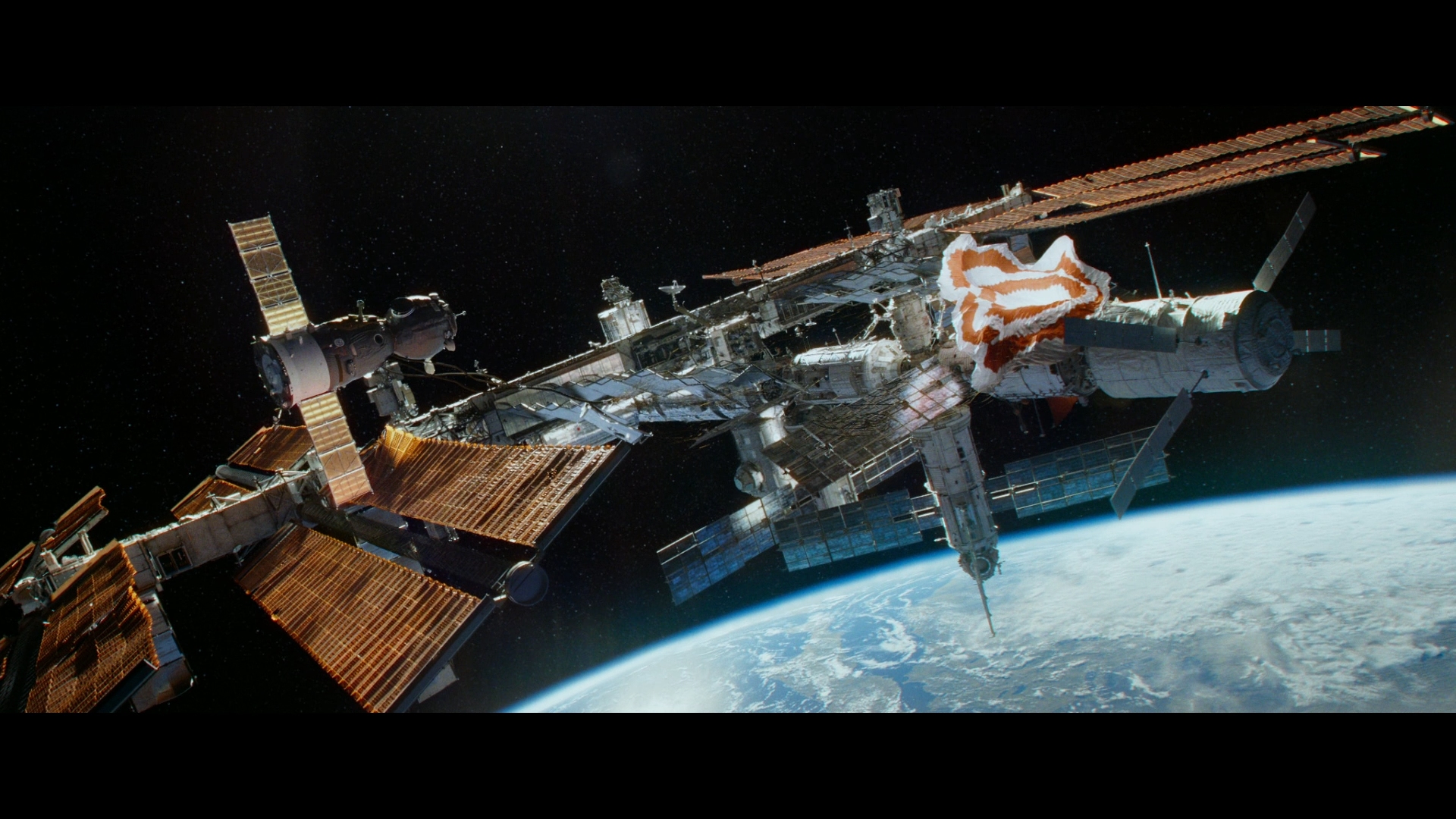 Warner issues a limp AVC encode for Gravity’s homeward appearance, one which finds itself amidst technical struggles. The overwhelming majority of this feature was captured digitally. In theaters, this resulted in immeasurable clarity. On Blu-ray, the disc appears bitten by a compression bug. Noise is consistent and even a touch invasive. While the level of visual effects remains staggering in their scope, something feels off in terms of home video transferring. Watching Earth leisurely pan around brings a mild exhibition of smearing into the visual stream. It’s subtle, if no less evident.

Much of Gravity’s HD purity is tossed around by expansive spaceship pans. Their detailing directs intense realism, with sunlight shimmering from their reflective surfaces. Work is all-encompassing, down to warning labels scattered across interior or exterior objects. Impressively, the drop from a 2K source is handled impeccably for home media. Despite the technical temptation, instances of aliasing are non-existent. Those masterful lines of space craft stay precise.

Cinematography is otherwise leisurely in terms of grasping dense fidelity. Closeups better handle smudges on the spacesuit glass than they do details on the actor’s faces. Built entirely in CG, the high resolution glass is afforded a perfectionist touch. At rest inside of a Russian craft, Bullock is weakly defined herself (possibly touched up in post) while her surroundings still exhibit exceptional resolution.

Crucially, black levels hold to the bleakness of space. Pure black is found everywhere to swallow characters whole as the feature demands. There are no lapses in density. Interiors hold to these same standards with an adherence to shadow detail. With a contrasting sun, Gravity is hoisted into hall of fame rankings for depth. While the recommendation remains to see this in 3D, the level of work displayed to maintain dimensionality is striking. With a reapplication of compression parameters, Gravity could be perfected.

However no such concern needs levied toward this 3D presentation, a rare disc which should be labeled as “essential.” Depth provided by an Earth fading into the backdrops add to the sense of calamity. Structurally, stereoscopic effects create clean separation between actors and their helmets, the bulbous glass creeping from the frame, poking out as needed. Intentional effects, including a loose bolt drifting toward the lens, break the frontal plane satisfyingly.

Naysayers of this technology now have to contend with a disc which displays purpose for what many consider to be unwieldy glasses. Drama is superior in 3D, adding an emptiness to space and tightness inside drifting craft. Elements are strong whether in the exterior expanse or otherwise, and cinematography accounts for the tech itself. Gravity is not the same in 2D.

Without hyperbole, this is the most important audio mix to a Hollywood feature to date. Gravity is inseparable from its sound. No other audio track is as essential to dramatic influence as this one. There is freedom from the traditional lock on center channel dialog, utilizing it only as necessitated. Pulling on the scope of a 2.35:1 frame, sound materials stretch with cinematography’s positioning. If characters lean to one side, dialog follows.

Gravity spins, flies, and explodes in a marvel of technical superiority. If an opportunity exists to push sound into a positional channel, it happens effortlessly. Warning sirens blare from multiple directions, radio contact swivels to match ear piece locations, and tracking during action begins a new standard for home audio.

It should be noted this feature is often designed around feel, not a Michael Bay thrill seeker. Subwoofer touches are subtle thumps to maintain a first-person aural ride duplicating the lack of oxygen. Where the film becomes subwoofer torture are the air fueled interiors, beginning to erupt flames in a multitude of directions with the heavy assistance of an LFE rush. Gravity’s finale is raw sound spectacle. Not giving this feature multiple Oscars for audio is a disservice to the medium.

On a final sonic note, this home performance is only 5.1. Gravity was originally mixed in 7.1, although meant specifically as a showcase for Dolby Atmos. Typically, this downmix would be unforgivable (and in some ways it is) but what is included here is nothing short of flawless. Some of the sweeping pans, especially those involving the score, make the deletion of those added surrounds invisible. A 7.1 mix remains needed, but few will find missing channels an issue.

This Blu-ray has one missing component: a commentary from director Alfonso Cuaron, a shame since this film was a passion project with his son.

Otherwise, this slate of extras is unblemished. At its heart sits a documentary longer than Gravity itself at 106 minutes. Mission Control is afforded multiple chapters to cover an enormous workload. Interviews skip no one and production values on this piece are appreciable. As a filmmaking companion on this complex multi-year feature, nothing is left to guesswork.

Five Shot Breakdowns are more in line with featurettes, picking apart certain aspects such as the complexity of the all-digital glass visors. Combined, these five run 36-minutes. Collision Point is a 22-minute warning about the nature of floating debris in space, narrated by Ed Harris and (of course) closely linked with Gravity. Finally, the short film which made rounds online earlier, Aningaaq (spoilers inbound), is offered with a Cuaron introduction.