Infinitely harmless with its stream of age related zingers and sure of its star power, Last Vegas spins up into familiar molding without forgetting its heart. Dashing to Vegas for a questionable wedding, four friends of over 50 years dive into the sights for scrawny plotting and shameless senior-sploitation.

Billy’s (Michael Douglas) soon-to-be marriage to a 30-something ignites a weekend getaway for these retirees, each laying low into their twilight years. With brewing animosity, Paddy (Robert De Niro) reluctantly joins this foursome, which is necessary for Last Vegas to have underlying narrative structure.

This is a “stays in Vegas” story, skirting sexual innuendo through a PG-13 barrier, enough to turn the crew flirtatiously corny. Humor is unquestionably safe; place seniors in socially unexpected situations and laughs become the studio’s insurance. But, writer Dan Fogelman (whose credits range from disastrous in Guilt Trip to brilliant in Tangled) props up zingers between those obvious moments of comedic contrivances. Last Vegas has timing and its cast seems relieved from their decades worth of serious, dramatic roles. Morgan Freeman and company are breaking free as much as their characters.

In its center, this is an off again, on again story of reconciliation between friends with an initially unidentified past. Billy and Paddy deepen an emotional chasm as Archie (Freeman) and Sam (Kevin Kline) are sidelined with personal squabbles of limited consequence. Last Vegas is strung along predictably by a wedding which can only swing one way, making excuses to show Vegas for the melting pot of deviancy it proudly claims to be. Run ins with a lounge singer (Mary Steenburgen) become the only sensible center for the guys to lean on.

Last Vegas is absorbingly leisurely, a cinematic vacation from super heroes, bloodshed, and true life dramas. There are no excuses or covers to the film’s genesis, which undoubtedly was spurred by Columbia execs shouting for a rapid-fire counter to Warner’s Hangover franchise. If Last Vegas was an ensemble accident of marketing force, it’s a happy one. 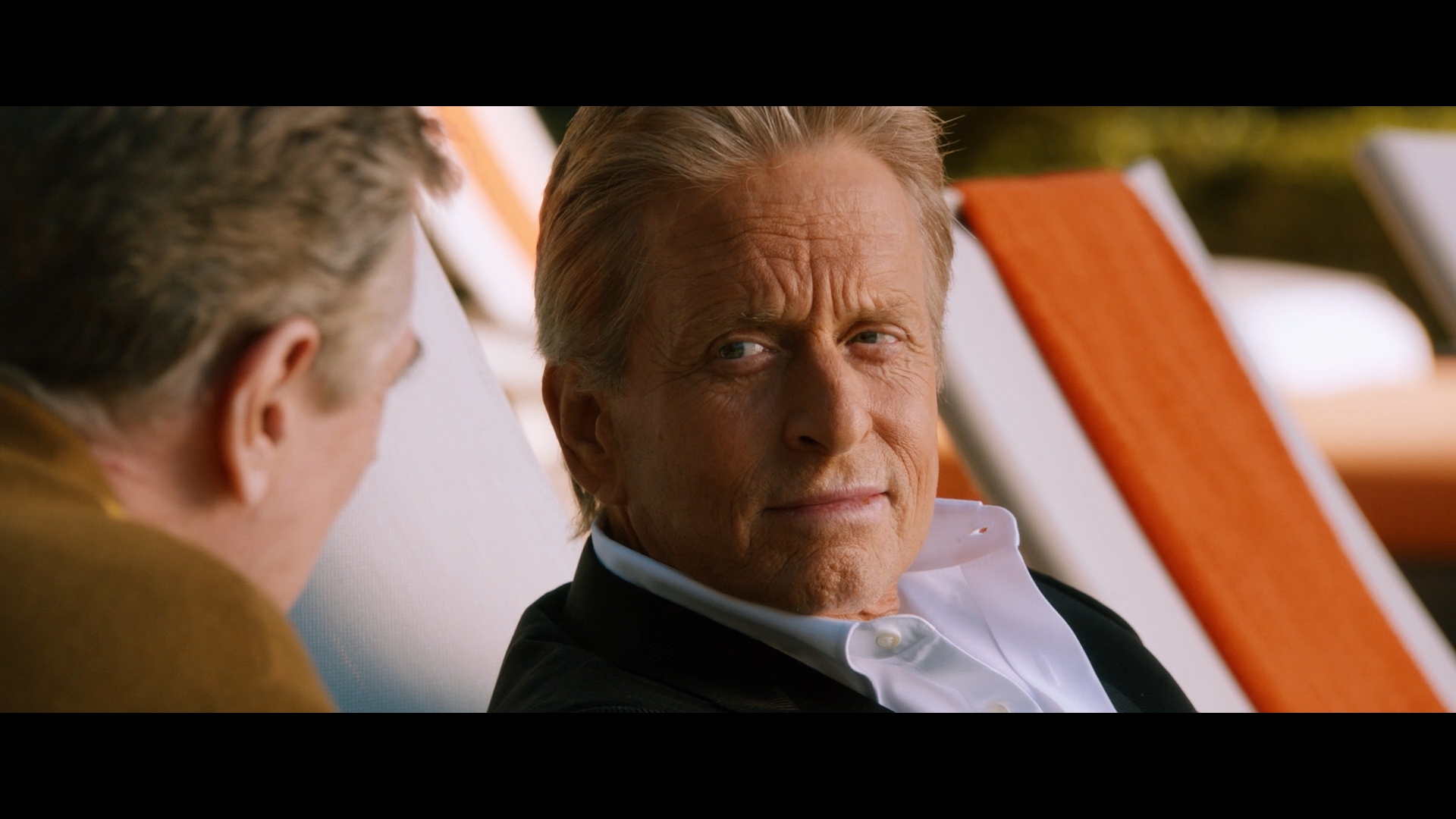 Texturally strong with a firm bond to sharpness, Last Vegas strikes with a capable AVC encode, working alongside a jumpy grain structure to swerve away from compression issues. Despite some focus flubs and yes, thick source-based grain, the feature is adorned with fidelity. Medium or close, exterior aerials, and establishing shots all douse screens with premium visual touches.

Opening with a flurry of orange to sell the vintage period, color timing shifts into a pleasingly elevated, natural mixture of hues. Stout primaries are applied with no loss of accurate flesh tones. Vegas lights and copious amounts of brightly hued alcoholic drinks are punchy in their appearance. Few shots dribble by without something to draw viewers in.

With the assist is a domineering contrast, heavy on lighting and pure within club (and casino) interiors. Black levels are stout, with strong density. There are no scenes where they squander an opportunity to perform. Combine color, contrast, and fidelity for a soaring image cutting into the heart of wide appeal.

Last Vegas does little wrong outside of inconsistently utilized filtering to keep down on visible wrinkles. Steenburgen in particular seems to be hit with the digital patchwork in certain scenes. It becomes hard to fault this wholly invigorated presentation otherwise.

This is Vegas, and the included audio mix is determined to prove it. With heightened club ambiance and bustling exteriors, material is plentiful as this DTS-HD tracks works extensively to capture the high life. Surrounds are liberally applied to give this talkative comedy something to work with. Party atmosphere, interior and exterior, is applied with varying levels to mix materials up. At full force, a touch of soft LFE is applied.

General dialog is typical for the genre, held to the center without stretching to stereos for added space. Levels are fine and clarity (of course) is perfect. Last Vegas has some sonic spunk.

A desolate landscape of bonuses awaits, all a few minutes long outside of the commentary with director John Turteltaub and writer Dan Fogelman. Six featurettes total a whopping 14 minutes, significantly less when you consider they become padded with finished footage. Topics of characters, location shoots, cast, a specific scene, kids in the opening set-up, and side characters provide, well, nothing. Skip of this gunk.