As an energetic popcorn muncher, Percy Jackson exudes a mixture of stylized adventuring, blending into the pantheon of mythologies. Slipping into the popularized frame of teenage magic dueling and personal responsibility, Jackson (Logan Lerman) hoists up a glistening sword, stabbing stuff which may interfere with his quest to snatch the life giving Golden Fleece.

This all used to be a namesake of Ray Harryhausen and Co., now doused with computer generated creepers and mountainous lava gods. It’s too much. Sea of Monsters rustles through a miserably slim narrative to find an excuse to jettison some kids from Camp Half-Breed, sending them on a quest without adult supervision.

Sea of Monsters is a saga of diminishing returns; there are only so many sniveling cross bred monsters to parade around on screen before their sights lose oomph. This Percy Jackson sequel loves its myth-based beasties, inside and out. Plotting requires at least one at all times to push the story forward, exposition not enough on its own. Jackson overcomes a shroud of self-doubt and his newly inserted oafish cyclops brother battles the harm of prejudice to add a glimmer of character.

Otherwise, this is a crowded film of faces, all meant to fill space between the rampancy of visual effects. Sea of Monsters is engorging on its computer rendered designs – all done well – while forgetting to anchor any of this down tight. There is no patience exhibited and zero trust laid onto its audience to soak up story, resorting to making rules for progression’s sake. The onslaught of expensive showmanship is wholly fantasy and ultimately worthless sans conjoining elements.

The series remains fun whether it pours on the razzle dazzle in place of story. Percy Jackson is a sharpened world of unseen gods and typical villainy from Luke Castellan (Jake Abel recreating his best Kevin Bacon). Despite an exhaustive nature, Sea of Monsters leeches onto its title, proudly boasting a roster of textbook, legendary abnormalities such as a mechanical golden bull. Everything is shiny and shimmering to draw the eye.

Devoid of tricks, Fox’s teen spectacle franchise soaks up predictable developments from Marc Guggenheim’s screenplay, eye rolling to cinematic veterans yet still fresh to an intended audience. Then Fox snagged a guy named Thor to direct it all (because it seems wholly appropriate) to plaster theaters with this “totally not Harry Potter” side journey. Sea of Monsters is something to look at akin to a picture book: Pretty, if suffocating on the idea of substance. 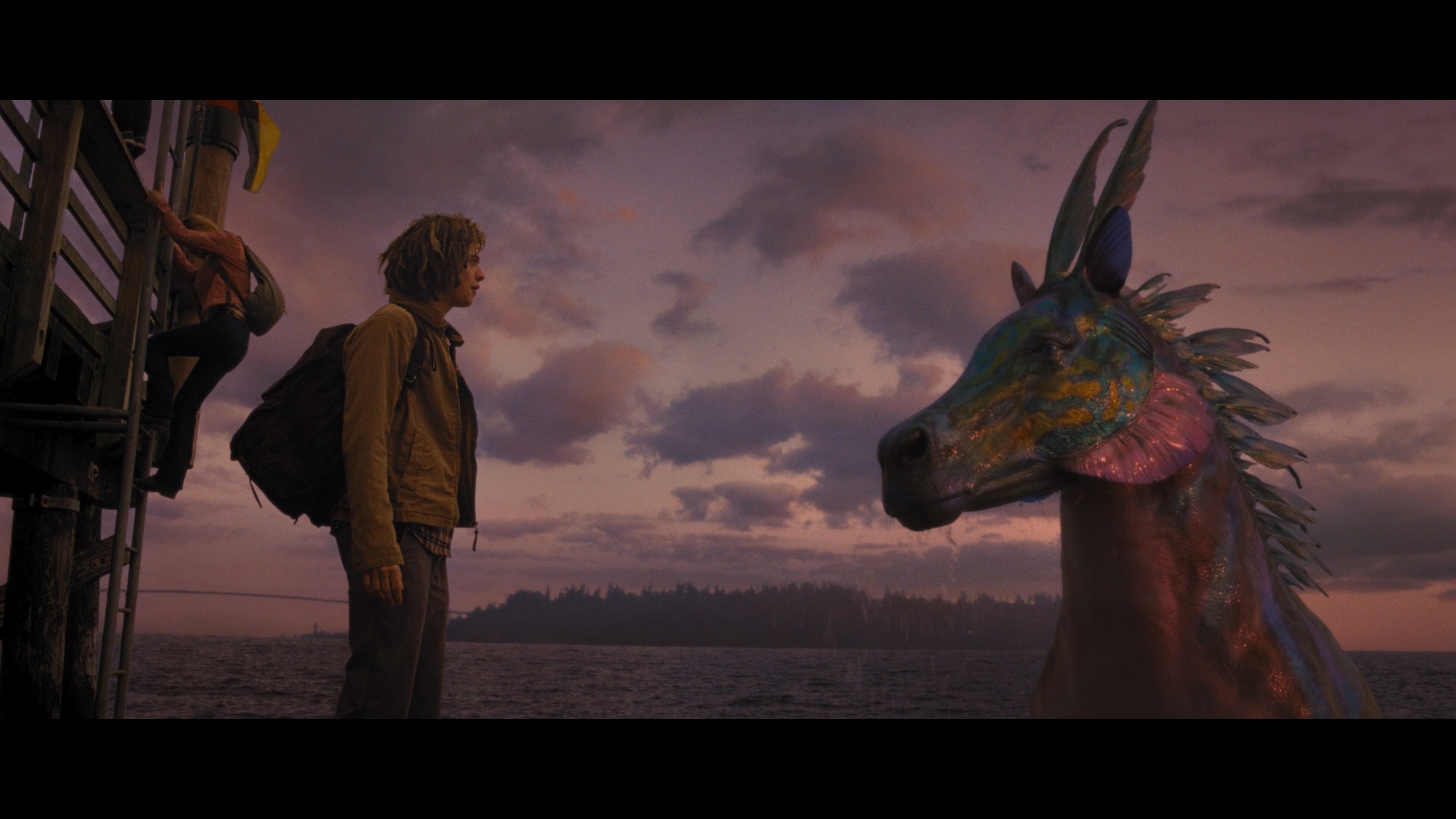 Despite a parade of digital antagonists (and some protagonists) dominating this feature, Sea of Monsters was delivered on film. There are digital tweaks inbound, especially color, while a mild unobtrusive grain structure slips in almost unnoticed. Imagery is strikingly clean with packed in sharpness. Slippery cinematography will often lose its naturally crisp nature and soften up.

While this feature opens with intense contrast and depth (including a blitz of primary color), images begin a descent into dulled teal. Squashed exteriors are devastated by digital color grading, matching the low light interiors. It is as if the feature forgets the art of showmanship for the sake of unoriginal, modern palettes.

Sea of Monsters will astound with its well trained depth regardless of dull color output. Blacks maintain density and richness and even if contrast loses its full punch to blues, there remains enough to oblige the technically minded viewer.

Textural qualities are here, if not in abundance. Close-ups drip facial definition while the majority of the best material is layered onto the CG creations. Inside the literal “belly of the beast,” small hairs line a monster’s digestive track, all of them defined. Any fur exhibited will gain points on this disc. Environments showcase well with trees and expansive shots of ocean currents. Consider this a looker if an inconsistent one.

A raw showcase for how to best utilize each surround in a 7.1 set up, Sea of Monsters rallies to life on the basis of thunderstorms, marauding creatures, fire, and unnerving ambiance inside of a monsters tummy. This mix is everywhere and given full opportunity to break from the center. This is broad action audio with no fear of slipping into positionals.

Any of the raucous action scenes dump a vivid energy into the proceedings, whether LFE is requested to scale up a 100-foot lava god or a cyclop’s footsteps need tracked during a cave assault. This DTS-HD effort handles water blissfully too, rushing overhead from widely space stereos. An attack by a golden bull brings every piece together with thanks to flames sprouting and hooves hammering the ground. Sea of Monsters misses nothing.

Tread lightly through these weakened bonuses, meant mostly for promotional use. A motion comic depicts the backstory of Tyson, a cyclops character new to the film series. This is at least useful. Deconstructing a Demigod is four minutes of character blather and Back to Camp Half-Blood has the cast discussing their return to these sets. It’s All in the Eye is five minutes of design and effects for Tyson, providing actual making of information. Trailers mark the end.