The Slipper and The Rose is a majestic re-telling of Cinderella’s familiar story in musical form. A British production by director Bryan Forbes and featuring the musical songwriting skills of the Sherman Brothers (most known for Mary Poppins), it deftly alternates between humor and romance.

The 1976 movie failed to see a release in America, eventually landing on American television in a shortened version. The story of Cinderella is mostly known through Disney’s animated adaptation, though this version relies on lavish costumes and stellar production design in support of the extended musical sequences. The musical is not entirely without its faults; television editing was probably correct in cutting out some of the lengthy movie.

Gemma Craven was an unknown actress when she was first cast as Cinderella, but her performance in The Slipper and the Rose validated the bold gamble. While she may not be the ravishing beauty some envision for Cinderella, her singing talents carry this film. She is a good match for her Prince Edward, played by Richard Chamberlain. Chamberlain was a smart choice as the dashing prince looking for true love, pressured by his parents to quickly marry for the sake of his country.

This musical adaptation keeps the fantastic elements of Cinderella’s basic story, including the Fairy Godmother (Annette Crosbie) and a pumpkin that magically transforms into a carriage. It does add a few wrinkles to the well-known tale and effectively uses the back-drop of Austria to add a bit of historicity, though it does feel compelled to place the movie inside the fictional European country of Euphrania. The 18th-Century period setting feels like an excuse to show off the elaborate costumes and sets.

Music by the Sherman Brothers is stellar, both witty and engaging on a number of levels. The lyrics combine poignancy with a dash of humor, even if we as the audience know every single turn in advance. This is a romantic film at heart, a common fantasy wherein the poorly-treated daughter will find her prince and their union will save her from a terrible life. It is a worthwhile treatment that still holds up under modern scrutiny, particularly if one is fond of movies like Mary Poppins and others of its class in the 1960s. Anyone with a taste for romantic musicals will find much to love about The Slipper and the Rose. 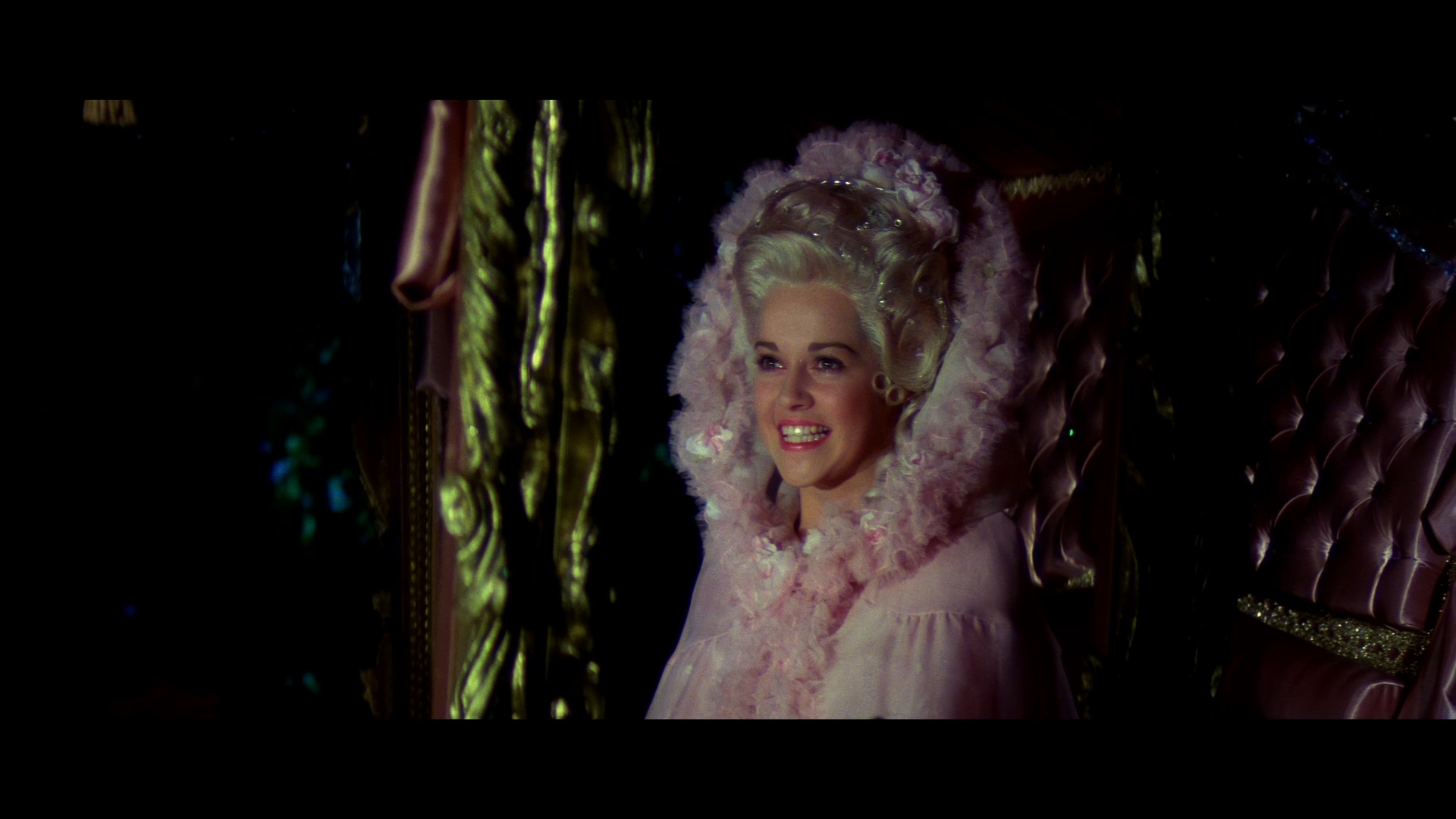 The British-made film arrives on Blu-ray courtesy of Inception Media Group. The Slipper and the Rose appears to have underwent some level of recent film restoration. While its film transfer is not quite on par with the best the format has to offer for vintage film, the independent distributor has put out a very respectable-looking BD from solid elements. The 1976 movie shows marked improvement in clarity, definition, and color saturation over standard definition. The cinematography by Tony Imi does tend to favor soft-focus lighting for more romantic moments, lessening its dramatic impact in Hi-Def at times.

The technical attributes of the BD are beyond questioning. The main feature runs an even 143 minutes, encoded in AVC at an average video bitrate of 26.20 Mbps. It was authored to take up almost all of the available space on a BD-50. Compression artifacts are not its problem, replicating the patina of grain and other film attributes quite well. The movie’s original, scope aspect ratio is properly preserved at 2.35:1, its cinematography taking full advantage of the widescreen frame. Many of the musical numbers are staged like a theater production, showcasing the lavish sets and costume design.

While the 1080P video shows substantial improvement in clarity and detail, the transfer is not flawless. A few early scenes look overly warm and green. It helps to saturate the color palette and allow certain colors to pop, but flesh-tones get overly pushed towards a blistering magenta. The transfer is mostly film-like, lacking serious problems with digital noise reduction or sharpening. Some scenes lack superior detail and resolution, particularly in close-ups, though that might be due to the softer style of filming prevalent at the time.

The print is in excellent condition, free of notable film debris. A small flicker is evident in a handful of shots that largely goes away with time. The pleasing color saturation and strong contrast of the video are mildly hurt by slight crushing to its black levels, producing merely adequate shadow delineation and depth. What it comes down to is that a recent scan of high-quality film elements has produced very nice results, limited by occasionally soft-lit cinematography.

As a musical, The Slipper’s audio presentation is a vital part of the experience. Its music from the Sherman Brothers and Angela Morley garnered two Oscar nominations. This Blu-ray offers three different lossless soundtracks, including a very rare, alternate surround mix as an option.

The primary 5.1 DTS-HD MA soundtrack presents the music in wonderful fidelity, as the singing performances are all overdubs recorded in a professional recording studio. It’s a front-heavy mix, largely using the surround channels as secondary support for the bigger musical numbers. I found it the best listening experience of the three available soundtrack choices. Gemma Craven has a beautiful singing voice and carries the central role with grace. Supposedly, Richard Chamberlain had aspirations for a music career before his acting career, though his vocal performance is more perfunctory and less inspired.

An alternate 5.1 DTS-HD MA soundtrack is offered with little descriptive information as to its origins. I believe it to be the original four-track, stereo soundtrack, re-purposed for 5.1 channels. There aren’t huge differences between it and the main surround mix, though the dialogue has subtly different characteristics in it. A 2.0 PCM soundtrack does not stack up as well as the more expansive surround options. The dialogue and music come through it with less clarity and a more cramped presentation, smearing the soundstage.

The only optional subtitles are English SDH, displaying in a white font that straddles the edge of the 2.35:1 framing. It should be readable for Constant Image Height users but some set-ups might pose problems.

This Blu-ray edition carries over the special features included on the older DVD issued by Image Entertainment, tacking on the trailer as a new addition. The commentary is a little dry, though the featurettes are densely packed with in-depth information on the film’s creation.

Audio Commentary With Bryan Forbes (1999) – Director and screenwriter Bryan Forbes’ commentary, recorded in 1999 for the DVD, is at times both droll and insightful. He dwells a little too much on the actors that had passed away by the time this commentary was recorded, but some of the nuggets he shares are quite interesting. Apparently the film was entirely financed by a rich Arab sheik, when a producer friend called him up and said we have five-million dollars to do any movie we want.

A Cinderella Story: The Making of Slipper and the Rose (28:46 in upscaled SD) – A vintage documentary narrated by David Frost, likely intended for television. It has a lot of interesting footage from behind the scenes, including Gemma Craven rehearsing her material. This has a lot more depth than modern featurettes, touching on a number of critical aspects to the production. It goes over the lengthy process before Gemma Craven was finally chosen to be Cinderella. A well-done mini-documentary that should be required viewing for this movie’s fan-base.

I Can’t Forget the Melody: The Sherman Brothers on the Making of Slipper and the Rose (16:38 in upscaled SD) – The Sherman Brothers’ songwriting is a critical ingredient in the movie’s success and both brothers are interviewed together. This featurette appears to have been shot for the initial DVD release, so it has more perspective from the participants. It really helps to define the creative process the brothers went through in writing the lyrics and their overall goals.