The franchise remains a burly expose on masculinity, letting bodybuilders flex their arms while exotic cars slam into one another, bursting into flames. Fast remains keen on committing plausibility abuse for the sake of violence, moments tremendously preposterous in order to force action escalation. Being tailed by a multi-ton bank vault at the end of Fast 5 is trumped in Furious 6 with tank-based ludicrousness, an unnaturally elongated runway, and carrier jet explosion.

Universal’s series has always been dumb, but before it was culturally so. It showed loud cars as it mixed with characters who existed solely for romanticized street racing. Fantasy has not given way to reality, although progression has severed the obnoxious, superficial glitz of underbelly LED lights and drifting. Fast exists to punch, shoot, and drive on a basis of outlandishly inventive choreography for which veteran writer Chris Morgan is designated scenario drafter.

Cruddy script set-up or not, this sixth entry in a series carrying dire naming conventions is no different amongst action staples. Whether it’s terrorism, nazis, or Owen Shaws of the world, Furious 6 is expedient in pushing audience appeal. Bunches of good looking people collide with other good looking people in good looking cars for good looking turmoil. Each chase brings an added layer of visually enticing elements to soak up, and while plotting may be coated in repetitiveness, these chases are not.

Elements of Furious 6 will forever hang low due to the passing of co-star Paul Walker, an unfortunate and depressing side to the loss of young life. In his passing sits a movie with his mark, a brighter film caught in a persistent smile. It’s raw escapism enjoyment and despite an unnerving “life imitates art” conundrum, surely Walker’s work should stand above the tragedy. 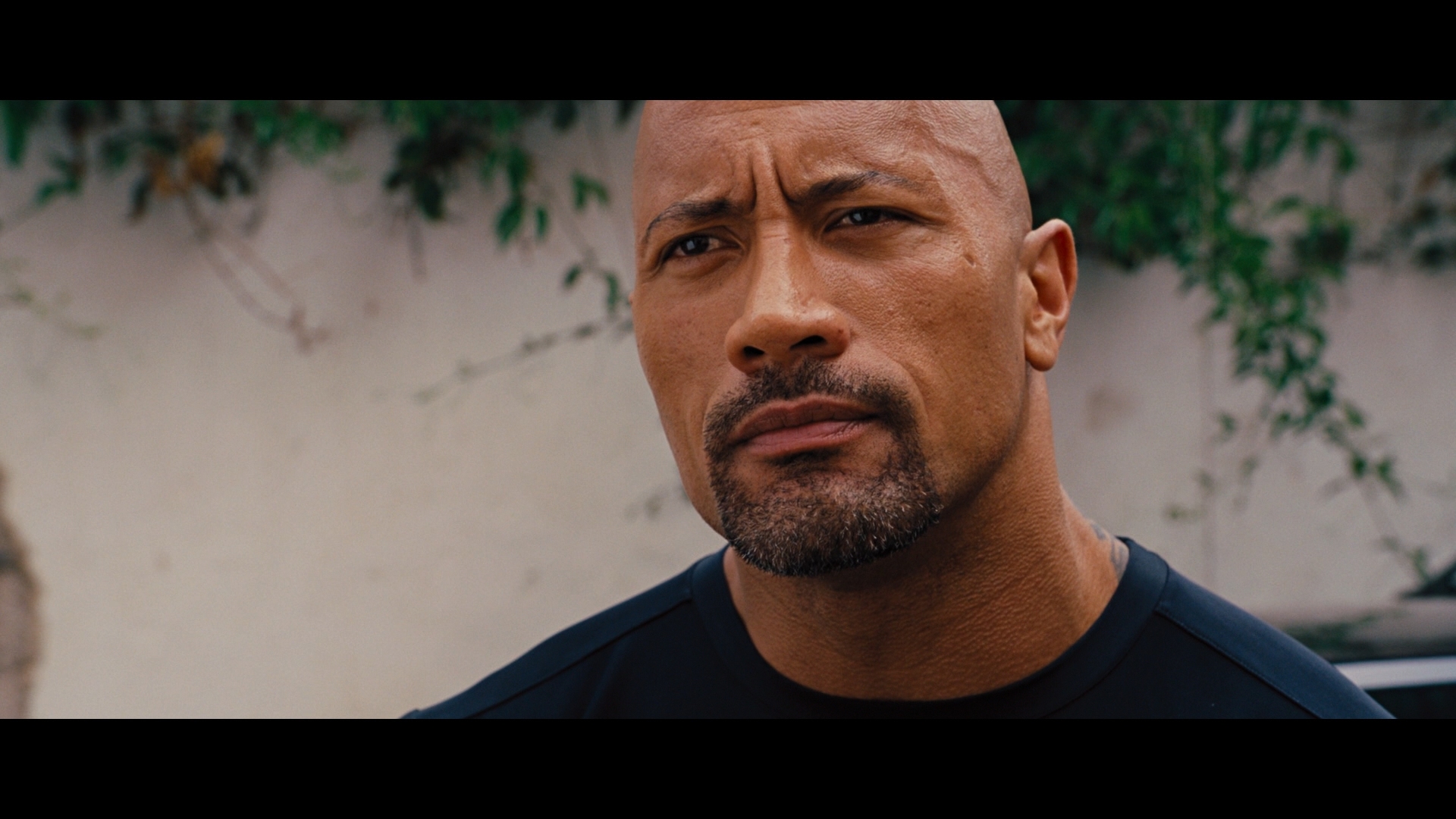 Note: Portions of the proceeds from the sale of the Blu-ray/DVD editions will be donated to Reach Out Worldwide in honor of Walker.

Cinematography for this sixth entry was done on film, arguably one of the few long running franchises in the current Hollywood slate to be consistently produced sans digital. Grain is thus inherent and thankfully resolved beautifully unlike certain other recent releases. Universal’s AVC encode works to establish a consistent level of film-based fidelity without intrusion from the compression.

Faults lie entirely with the wiggling cinematography which dips and dodges sharpness with alarming regularity. Focus shifts with a consistently annoying loss of image crispness. Close-ups veer from showcasing pores and clothing minutiae down to fuzzy or imprecise appearances. Juxtaposition between quality is readily apparent through much of the film’s dialog sequences.

Furious 6 is otherwise visually striking, with wide palette decisions affording the piece numerous looks. From warm to cool to oranges, yellows, or teal, this is never a rush on one specific palette. Preservation of flesh tones is paramount regardless of color grading.

As a final push, black levels have defined purity, if not a dominating force to total black. Scenes requiring fullness barely miss richness. Still, they carry a natural appearance with preservation of shadow of detail. Depth is equally strong to protrude those muscular chests to the forefront of the screen.

There is plenty to rave about regarding this DTS-HD masterpiece, with the only exception being a resistance to 7.1. Fast continues to display itself as an audio powerhouse, rambunctious and wily with its use of surrounds. Cars engines pan effortlessly between the available channels, zipping between sides or jetting between the fronts. Transitions are flawless, and debris fields keep giving.

Furious 6 generates additional aural oomph from exaggeration of punches. Each one powers into its victim with force to emphasize strength. Gunshots ring out with excellent positioning and ambient cross fire. Shattering glass is quite popular here.

It’s the LFE that adheres to no restraint however, bringing down a carrier jet and bumping itself up when cars meet their end. Engines burst to life and some tank rounds are enormous with their thrust. Soundtrack beats pop while subtle moments are brought into the fold such as lights inside a prison being shut down. You can feel the electricity being drained.

Justin Lin provides a solo commentary track to pad extras which are otherwise passe. Note the disc carries an extended cut of the film, running less than a minute longer. Three short deleted scenes should be passed over. Take Control would seem to be the remnants of an abandoned picture-in-picture feature as cast and crew dissect certain scenes for 20-minutes.

A making of splits into four parts with no “play all” option for around 22 total minutes. Planes, Tanks, and Automobiles also offers four pieces to focus on the major vehicle scenes. It’s All About the Cast? That’s three parts of insight on the stars. Hand to Hand Fury spends 10-minutes on fight scenes and it’s the best thing here. An unfortunate first look at Fast 7 is offered as Universal clearly did not have time to recall the discs for its removal after Walker’s death.