Maybe the aliens were right. Maybe humanity isn’t ready for intergalactic mingling. When the Body Snatchers came down and warped our minds from the poison of free thinking, we stopped going to war and stopped hating each other. So for World’s End, maybe we are in fact better off being under control of alien robots.

Or, this is just the booze talking.

After all, a dozen pubs in one night – 12 pints worth of various worldwide lagers – can warp anyone’s perception. When five mid-life crisis sufferers pony up for this distinctly British (fictional?) pastime, they’re impeded by alien invasion. Lechtworth, New Haven has been snatched by eye glowing robots of sorts, or maybe it actually is all the booze talking. That would be a twist.

Edgar Wright champions this third entry of the jokingly known Cornetto trilogy, pitting Simon Pegg and Nick Frost in an energetic blaze of action brawling versus blue goop spewing otherworld-ians. World’s End could have been coronated on the concept of dumping five Brits into a binge drinking run; the aliens are but a mere topper.

There is some heart here, arguably too much so in the closing moments, although it creates a bastion of humanization amidst the outsiders who aimlessly drone on. In the annals of “alien body take over” flicks, World’s End is kooky enough to be effective, even oblivious. New Haven’s secrets are background occurrences rather than a focal element. Subtle nudges and clues toward the town’s truth are enjoyable as characters bond together. There is enough identity scattered about to suffice, with Pegg owning much of the piece as the blaring Gary King.

Comedic timing continues a torrent of one-liners and brilliant miscommunication, pulled from the established playbook of Shaun of the Dead and Hot Fuzz. Those intangibles have not diminished over the previous decade, although World’s End is a notably different film. Nick Frost is smartly playing out of character which changes the central dynamic which powered the previous two Edgar Wright team-ups. Playing straight cuts a consistent line of comedic material for Frost, breaking from familiar. Clear concern for repetition has been intelligently employed to make this piece stick out on its own without dropping identity.

For its wackiness, World’s End still embeds messages of adulthood, growing up, the value of recaptured youth, and the marketable sturdiness of bar stools when used to splatter alien robots. Dialog on coping mechanisms and even a touch of alcoholism dabble in arenas typically eschewed in comedic ventures. Yet, here they are, and they actually work.

Or, maybe that’s the booze talking too. 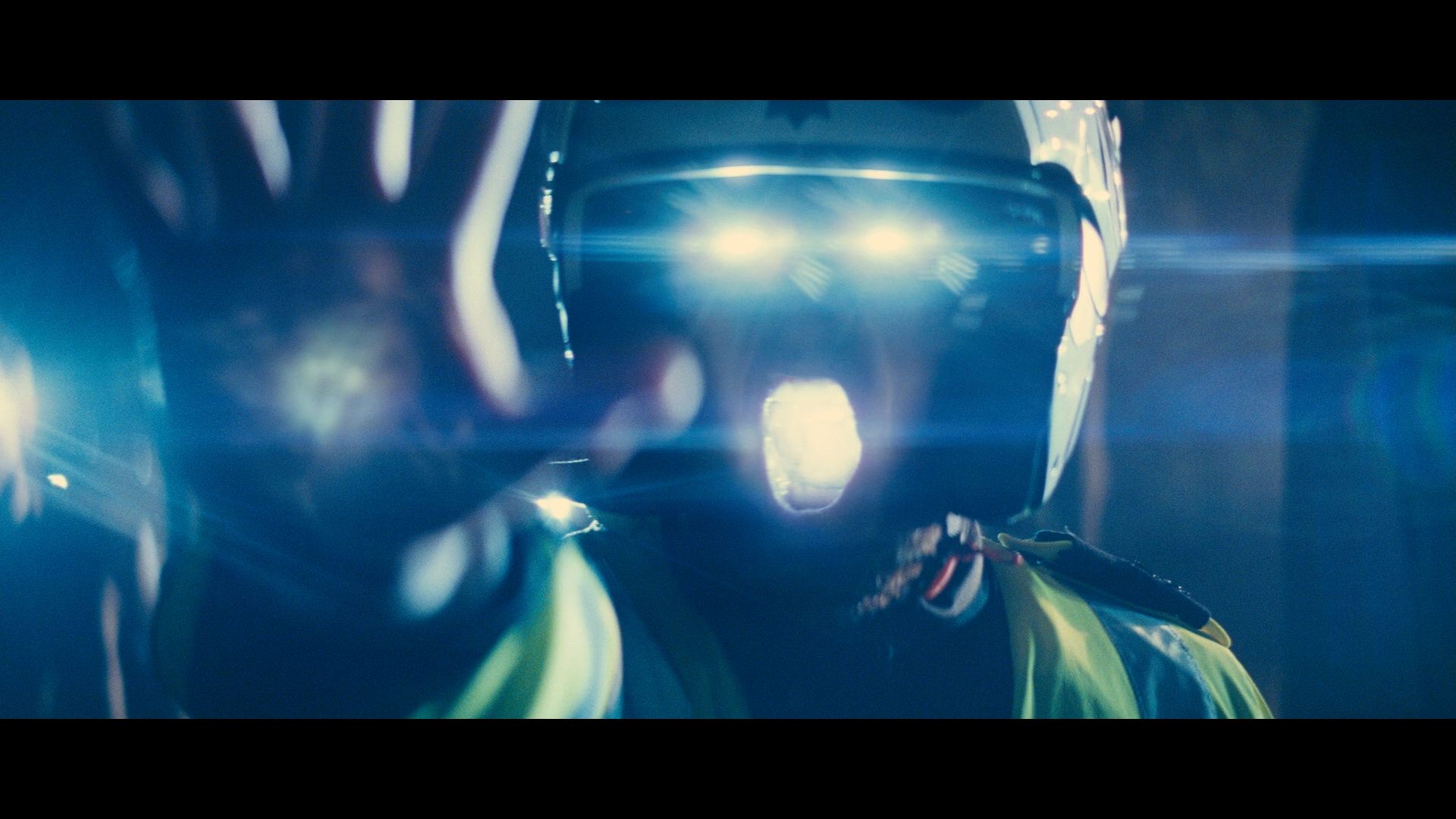 Edgar Wright and first time Cornetto trilogy cinematographer Bill Pope shot World’s End on film, and it’s wonderful. Early in the HD DVD/Blu-ray war, Hot Fuzz became a champion on the side of red, a live action disc of impeccable fidelity. This latest carries a tradition with few exceptions. Universal’s encoding is pure, sans one shot late in the film with haze covering it; compression becomes visible. World’s End opens in the ’90s with a touch of intentional softness and thicker grain, without abnormal encoding quirks.

The hallmark of these productions continues to be facial definition, absolutely precision whether in medium shots or up close. Levels of visible detail rarely suffer from fluctuations. A sequence involving Pierce Brosnan near midway through is the only egregious fault with imprecise focus which appears done in camera. Loss of image density is notable when in direct competition with the rest of the film. Said drop-off is annoyingly jarring.

Carried from Hot Fuzz is a superstar contrast and substantial black levels. Early in their Golden Mile run, sun beats down to blast the screen with bleaching qualities, with furious accentuation of depth. Night falls to create pubs flooded in thin lighting, calling upon blacks to up themselves for effect. They do. Beautifully. World’s End continually produces dense and appealing images even if it sacrifices a hair of detail in shadows to get there.

Color timing will occasionally brush up oranges and teals without subtlety. The amped up primaries are otherwise naturally fluffed up with plenty of appeal buried in their hues. Flesh tones, when not falling victim to blasts of orange, are suitably rendered. British locales are cleanly done with excellent greens and deeply red bricks. This one is a looker.

While World’s End holds back for its second half melee, elements of the soundtrack/score pound on the low-end to ensure audio carries weight. Beats come through with pounding force and end results are effectively done. A club scene adds another layer for fun with music popped into the rears.

Once chaos churns into the film’s center, the goal is to keep each fight moving off-screen. Glass consistently shatters and grunts of pain can be heard in every direction to create a dazzling 360 degree fight soundstage. Ambiance is never lost. Of course, pieces to the forefront of the action are notable. Punches connect with thuds and blue goop splatters into surrounds and stereos. A late entry in the audio cause includes swirling voices leading into a long, droning explosion with epic low-end might. The disc keeps on giving for its entirety.

It’s an Edgar Wright movie! What does that mean for the layman? It’s jammed with stuff. Wright joins Simon Pegg for a commentary, as if the disc fails to cover enough elsewhere (but they remain hilarious, so listen anyway). U-Control, unfortunately a Universal in-movie pop-up feature which still exists, reveals storyboards as the film plays.

Getting into more feature-y stuff, there is a singular deleted scene (?) and 10-minutes of outtakes. Alternate takes continue a stream of content removed from the main feature. Completing the Golden Mile is the main bonus attraction, 48 minutes worth of insights from cast & crew. Four featurettes follow focused on Edgar Wright, Pegg & Frost, the reuniting of familiar faces, and the creation of the Cornetto trilogy term.

Filling in the Blacks details the complexity of visual effects and stunt work for a half hour. Two sections of animatics drop back further to see early production, followed with hair & makeup tests, one of the few things here worth skipping. Footage from early rehearsals is entertaining, and stunt tapes split into three sections. Visual effects breakdowns split three ways for key scenes to continue the technical side of things.

Bits & Pieces finds footage unsuited to any other section of the disc and tosses it into this montage of randomness. There’s Only One Gary King is a mash-up related to the character. Signs & Omens is fantastic for having subtle hints and clues pointed out from the finished product. Edgar and Simon’s flip chart peers into the creative process from the origins on paper. Clips from a TV safe version are priceless, with a trivia track, still galleries, and trailers leaving even fans exhausted.