A meth lab dust up and double cross finds Nick Walker (Ryan Reynolds) zipped up in a body bag, but living an existential life as keeper of the dead. Thrust into the “Rest In Peace Division,” Walker peers into the world of the pseudo living and ensuring they cannot disturb the peace.

The dead? They’re cranky. Most struggle to grasp their death and refuse to be sucked into an abysmal after life scenario. So, they live among us, wearing different skin and hiding their gruesome truth. Replace any of this with aliens and you have encountered Men in Black.

However, these heroes are not wearing black. Walker dresses down as a modern detective and his boorish partner is stuck in the days of the Old West. Roy Pulsipher (Jeff Bridges) died in the open plains, and as the dead go, his persona is locked to his period of death.

As rules go, you appear as yourself to, well, yourself. To others, you form an Avatar. Walker is an elderly Chinese man to the living, Pulsipher a tight skirted blond. This all makes sense to an extent until R.I.P.D. begins inexplicably shattering its rules for the sake of high scale, summer action. Deados, those bothersome spirits, become visible to the world, tearing up Boston and seeking to bring their own into life with the use of an artifact.

Deados are heinous blobs, with flapping jowls or visible wounds representing their dead selves. Human forms are only partially rendered. They have powers too, such as walking up buildings because it looks cool on camera. Why they don’t always use these tools is never given explanation.

Ryan Reynolds is R.I.P.D.’s downfall, a magnet for exposition as an underperforming rookie paired with the wise – even cocky – veteran of the force. Key to Men in Black was Will Smith and his personality. Despite this shared positioning as a freshman hunter of the weird, little of Reynold’s comedic charms and smirks peer through the veil of reported rules. Reynolds ask who, what, why, and where because the audience needs to know. The script cannot find a better means of handling said material.

R.I.P.D. barely crosses 87 minutes, and in that time it finds itself still citing rules and purposes until a climactic showdown. There are still holes and these things cannot be considered inconsequential. R.I.P.D. rushes into entertainment service to close in on visually enticing shots and acumen for routine green screen performances. After splurging $130 million, someone figured boldly scaled effects sequences were the solution to any woes.

Robert Schwentke directs and he has an eye for action, handling the directing duties on the superbly engaging Red. Here, it’s mere action. Red’s unbeatable cast and comedic surrealism were played to tone. R.I.P.D. is too infused with monsters and stupidly captivated with human level drama. To pull Men in Black again, miniature snippets of character’s previous lives grounded personalities and moved on. Walker becomes obsessed with his wife which crushes a puny running time with a half delivered “power of love” scenario.

Audiences came for monsters, and even if those are dangled precariously in front of green screens, they’re still rated above lost loves on R.I.P.D.’s scrawny entertainment scale. 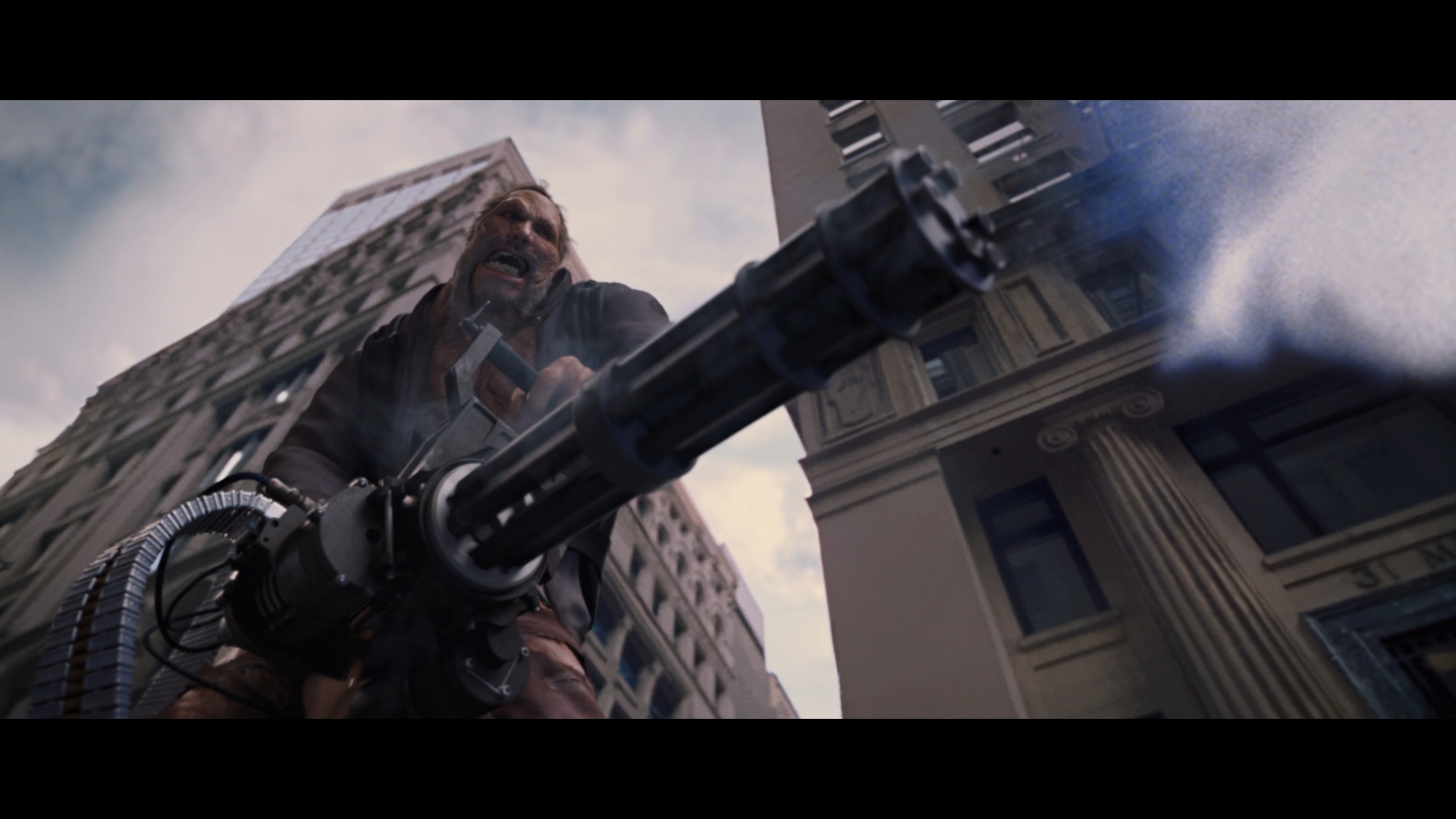 R.I.P.D. goes digital with the help of Arri’s Alexa and walks away scraped up and battered. Whether coming from Universal’s Blu-ray or theatrical cinematography, the flick seems weighted in filters. Medium shots are direct offenders without any breaks in their fidelity dimming consistency. Shots in R.I.P.D. offices with Mary Louise Parker are often dismal and smeary without precision expected of the format. Computer generated effects can fend off misgivings if still lacking in notable crispness.

In close the game changes and resolution feels natural with extra refinement to push out definition. Facial details are stout and pure. Bridges’ beard and aging face are a conduit for resolved details. Lighting schemes prove perky with their contrast and enrich everyone else in the process. While a typical victim of nighttime cinematography, R.I.P.D. has the touch.

Little attention to paid to keeping the piece locked into a singular palette. Scenes in Fenway Park are blistering with primaries. R.I.P.D. itself is steely and under fluorescent lighting, while Boston is hit with the bug of orange and teal. Typically dreary conditions wash up regularly and become addicted to two hues. Flesh tones take a mild beating although it’s more on Boston which is soaked in blue-ish buildings.

A final caveat are black levels. R.I.P.D. opens on a hole being dug – from the hole’s perspective – and darkness is weakly generated. It moves away from being considered overcast or gray in appearance, but still lacking in density to lock in depth.

Instead, depth is acquired by a quickie 3D post conversion. The 3D decision was late in the process, often leaving R.I.P.D. sagging in terms of true dimensionality. There are moments where a 3D panic button seems to have been hit and it stretches proportions. A zoom on Kevin Bacon’s charm bracelet early extends his arm and deepens the car unnaturally.

R.I.P.D. has some stylish 3D moments and plenty of guns pointed toward the screen. Bullets come en masse toward the lens while a few moments of embers or dust will layer onto images. Two spectacular uses of still environments are certain highlights, characters trapped in a paused world where flames and debris hang in the air around them. Those are fantastic uses. The rest is passable and certainly energetic if clearly not considerate of the format.

Video disappointments are one thing but sagging in terms of audio prowess in a summer blockbuster? That is completely unacceptable. R.I.P.D. gives up in terms of LFE. As a storm begins sucking Boston into peril, buildings begin collapsing around the stars who attempt to outrun the danger. Good luck finding subwoofer material. It becomes more of a faint gurgle than satisfying rumble. This is all shared with guns and music, all of which performed listlessly where it should count the most.

Audio materials are not oblivious and deliver widely spaced stereo and surround use. Gunfire rips through the fronts and into the rears as bullets pass, staged with some sense of visual 3D space. Audio placement adds to the effect. Chase scenes work in engines and debris fields are well distributed between the five available channels of this DTS-HD piece. Whatever happened to the ferocity of the .1 in this situation will remain a mystery for R.I.P.D. agents to solve.

Despite flopping worse than a land stranded fish, bonus features in this failed franchise starter are in-depth. Two alternate openings, three additional alternate scenes, and a single deleted one open things, with a bright gag reel to follow. A series of motion comics use Nike and Roy’s avatars to recreate certain scenes. Alternate takes with the Avatar actors follow.

Transferring R.I.P.D. features crew members detailing the conversion of the graphic novel to cinemas. Filming the Other Side is promotional with a focus on visual effects. Walking Among Us looks behind-the-scenes with actors doing their own stunts. Anatomy of a Shoot-out peers into the finale with a massive set design and visual effects. Total? Near an hour of content and mostly mixed.