This series hates animals.  Molesting a tiger in the first, getting a monkey addicted to cigarettes in the second, and slaughtering a giraffe in the opening of Hangover III, no one is beacon of animal sensitivity in these films. It becomes worse in this trilogy maker, with two dogs senselessly murdered off screen and a couple of violent roosters dispatched in inhumane ways.

There is an unwritten rule in Hollywood: Don’t kill the dog. There is a website set up to warn people in advance of any animal action and its consequences. Hangover III doesn’t seem to care.

At one point, Hangover was a leisurely comedy, with three unmatched personalities dipping into the limelight of Vegas and enduring absurd adventure. Phil, Stu, and Alan (maybe Doug too) were simply amusing together. Storming summer box office results turned their lives into an impromptu franchise, going so far as to propel careers.

Yes, people die in Hangover III and those deaths are uncomfortable too. But, shattering those boundaries, those sacred unwritten oaths regarding the well being of helpless creatures has steered Hangover into a revoltingly dark sector of comedy. There is harmless drunken rowdiness involving Mike Tyson’s tiger and there is the suffocating of a chicken by a side character forced into prime time status.

That side character Mr. Chow (Ken Jeong) is back, now a key player rather than the naked Chinese man bit part who memorably stuffed his nude groin into Bradley Cooper’s face. Through exhaustible exposition, we learn Chow is chased by a rival thug, Marshall (John Goodman), who holds Doug hostage until the bonded Wolfpack can pinpoint Chow’s location.

Todd Phillips and Craig Mazin deserve credit for not shamelessly recounting the first Hangover for a third time, ignoring the franchise’s premise in its entirety. It isn’t until a post credit sequence someone ends up smashed on the floor of a hotel, leaving the crew clear minded for the entirety of their main predicament.

Hangover III is a clean-up film, filling in minimal uninteresting blanks such as what happened to the baby from the first film, or who the other Doug’s dealer was. This is more of an opportunity film as comedies so often cut themselves off after one go round, or splice themselves cleanly. With profits on the line, Hangover cements and grounds even the simplest of quotes which contained dangling mysteries. For a writer, it is a rare and privileged exercise to wrap up work in such a way. For the audience, it grabs at wallets and purses like an obligation. If you have seen the first two, it seem necessary to close off the trio during a free Saturday night.

Hangover III is glossed with moments of outrageousness, and some are genuinely funny. Galifianakis’ man child routine is exploited to oblivious extremes, and Ed Helms’ shocked looks still place him as Hangover’s straight man. However, this is a film which opens on a violent Bangkok prison riot, and segues into tiered expressway accident caused by the flying decapitated head of a giraffe. Hangover II was seedier and wearisome, but it was never distressing. Somewhere, the good natured ribbing turned rotten. It’s not fun anymore. 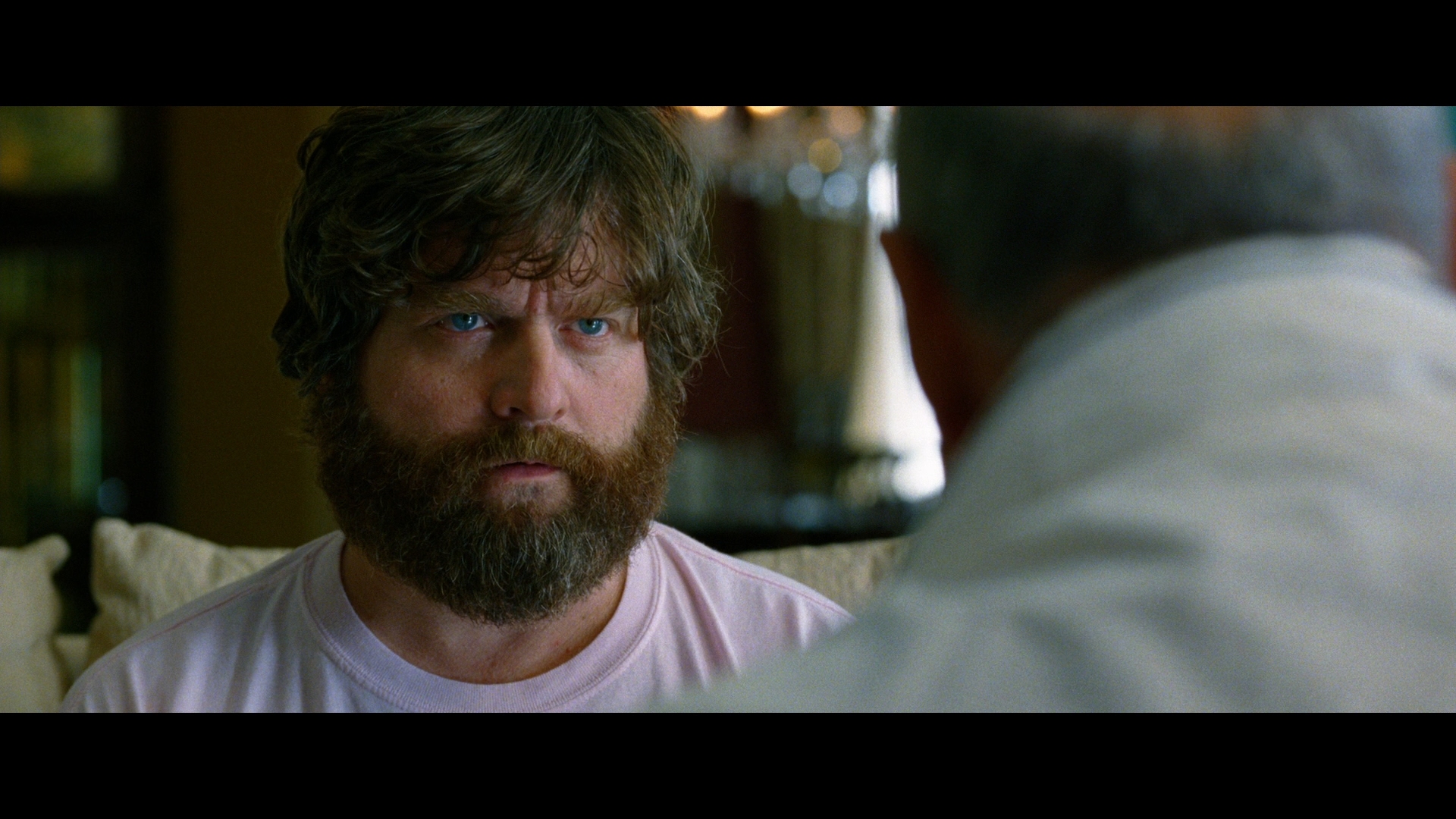 Hangover III sticks to film to remain visually consistent, so good on your comedy franchise for keeping things together Warner. Not so good on you Warner for having yet to lock down these film-based sources with their sagging compression methods. Hangover III carries competent bitrates, and yet at a glance, images spill over into a story of crumbling consistency. Grain drizzles over each frame and during pan shots, sticks to backgrounds unnaturally. AVC encoding is astoundingly unclean, and miniature artifacts eat away at fidelity.

To be clear, the film is afforded sharpness and fine detail. Close-ups resolve beautifully and render facial definition with purity. Source cinematography has a way of falling from focus while the rest of the feature plays nice. Exteriors are crisp and foliage is pristine. Late shots of Vegas are marvels too.

Black levels can cover ground, and they do during most of the night driven sequences on display here. True black is regularly achieved without a sag on shadow detail. Because of their dense appearance, blacks can manage grain too, sending it into the darkness and out of sight of this clumsy encode.

Much of Hangover II was blistered by pitiful orange and teal schemes, so credit again goes to the behind-the-scenes team for laying off. Sequences in Mexico and the opening Bangkok shots are the only ones to fall victim to fashionable color grading. Hangover III will stick to appealing primaries and dabble with warm flesh tones to keep itself brightly rich. It is important to note how the brighter hues break grain free and not with a subtle touch, so it is conflicted area of positivity.

Comedies traditionally wash themselves of audio design by default, but here lies the exception. Hangover III should not be glossed over for its immediate impact. The transition from prison to title logo is met with a tremendous burst of bass, rushed further into service inside of the sewer. Voice echoes, dripping water, and then a burst of rushing water create a flurry of appreciable audio to take in.

There are action scenes abound, from freeway scrape ups to gunshots or Las Vegas fountain landmarks firing off during Chow’s parachute sequence. An infusion of hip hop is beefy when it finds itself in the low-end, and design is often spacious. Ambiance is rich and mirrors locations to set characters in place. Imaging is precise and enjoyable while specific in its channel use. Enjoy this one.

Hangover III dishes 30 minutes of bonuses, nothing outright spectacular if consistently entertaining. The best here is Recasting Zach where a series of noted actors are brought in to read for the part of Alan. Wolfpack’s Wildest Stunts focuses on stunt work and actor’s fears. Pushing the Limits showcases the problems with kids and animals on set, or why you should never work with either.

The Real Chow is a faux documentary on Ken Jeong’s character… or is not just a character? Action Mash-up is a rapid fire selection of action scenes from the feature, pointless in a way few features achieve. Extended scenes are “meh,” and outtakes are quite entertaining.