Anchorman has no center, no one to give glancing looks toward the camera or stare in shock as to what they’re seeing. Everyone involved is an equal opportunity, self-important idiot. It’s glorious.

Anchorman is a comedy of erection and poop jokes, somehow softening a message of office misogyny, and has a blast doing it. Corningstone is a threat battling for workplace equality as she slams anyone who would wrong her. Ferrell is unquestionably the star as self-worshiping Burgundy, although such a position does not prevent total meltdowns over burrito littering.

Even though it dodges direct parody, Anchorman carries the comedic guts of an Airplane!, sans rules or borders. This is a film where rival news anchors engage in a back alley brawl where limbs are severed and people are killed with tridents. With immediacy, plotting sits everyone down to re-engage a center power struggle between KVWN-TV’s contesting anchors. Because Anchorman can.

The film is Will Ferrell on fire with the casting bliss of supporting hands. Adam McKay directs a legion established and soon-to-be established comedic names who sling materials in such quantity, deleted footage was enough to build a secondary film (Wake Up Ron Burgundy). Steve Carell’s appropriately named weatherman character Brick is a consistent performer when the film needs an injection of randomness. Paul Rudd and David Koechner play off one another as unruly sidekicks, with cameos from Ben Stiller, Danny Trejo, Luke Wilson, and others flooding screen space.

Each scene is a marvel of comedic timing and wit. Knowing the volume of material at their disposal, piecing this together was assuredly herculean thought. Choices matter, and Anchorman makes the proper ones to elevate this scotch downing festival a growing legend. 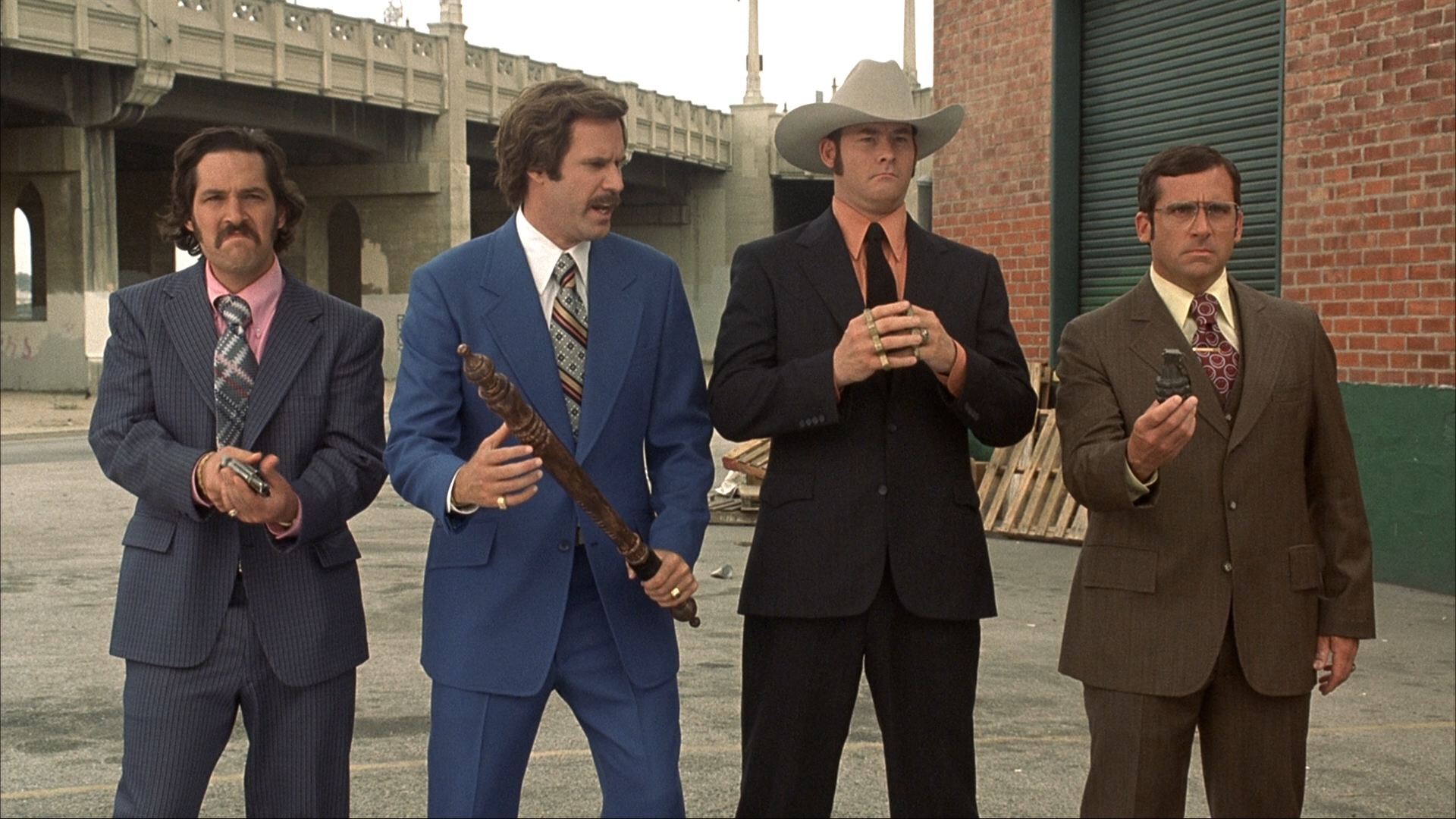 No Paramount! That’s a bad Paramount! Don’t you ever double dip a Blu-ray again using the same HD DVD master from 2007!

But seriously, this is the same, glaringly low resolution scan repackaged with a refreshed encode. High bitrate AVC work is not helping. Anchorman is ridiculously damaged with specks, dirt, and a few scratches unusual for a film mastered only three years after its release. Most vintage films dodge such intrusion as we enter an era of carefully considered scans. Twice now Paramount has issued a Blu-ray for the film, and both times they have failed to clean up anything.

Anchorman is not unwatchable. However it is cast with the faults of a master you would expect for something pushing seven years old. Edge enhancement is a definite bother, robbing the film of fidelity in medium shots and swiping a natural sense of film. Grain structure is thus raised and unnaturally rude, putting pressure on the encode to keep up.

Despite the appearance of defined close-ups (some impressive), an overwhelming sense of digital, subtle touch-up never disappears. It sits, hovering over the image as an unwanted specter. Medium shots lose their gloss and shots of San Diego feel 10 years older than they are.

It would make sense for color timing to shift older, and yet Anchorman is rocking primaries and bumping up the power of its hues. Colorful suits carry immense saturation, with flesh tones unharmed. Greenery can be intense and all of these hues turn out to be this disc’s heart. It doesn’t have much else to play with.

There’s a fight scene and… nothing else. At all. Give the DTS-HD mix credit for pumping up its lone action sequence with clanging swords and tridents, taking advantage of its lone opportunity to impress. Surrounds activate and stereos cling to their moment of life. One brief fling occurs late with a touch of music inside a bar which splits channels and escapes from the center.

Maybe this comes as no surprise to some, but the disc also sounds aged although not in a natural, “2004” way. Anchorman sounds compressed despite the call of DTS-HD and bitrates which show otherwise. Dialog is weakened with a flattened streak and comes through no more substantial than it did on HD DVD with Dolby Digital Plus. This one needs a video and audio makeover.

The “Rich Mahogany” edition of Anchorman is flooded with bonuses, almost too much if that possibility exists. Things kick off on the first disc with an eight-way commentary with an hours worth of 36 deleted/extended scenes following. That has to be near a record for deleted content included on disc. A fantastic blooper reel is a must, as is a music video for “Afternoon Delight” featuring the cast. Disc one leaves us with Ron Burgundy’s ESPN audition.

Disc two overloads itself with Wake Up Ron Burgundy, in 1080p and DTS-HD. This 90-minute concoction is built from deleted scenes of the main feature. An intro from Ferrell and an assistant Aaron Zimmerman is also offered. Early production items, from casting videos, table reads, and rehearsals are granted their own departments. In-character items include an award speech, reports from the field, interview sessions at the MTV Movie Awards, and mock PSAs. Raw footage runs for 40-minutes, considered good takes with potential for the finished product until something else was chosen. A section for random footage which didn’t belong anywhere else in this mix is offered, plus trailers.

Finally, the disc comes housed in an outer cardboard shell which contains Burgundy’s diary and some trading cards.