Every stunt in Getaway was done live. In total, 130 cars met their end in Bulgaria during filming, a Christmastime smash-up with mindless plot devices. Police cruisers, which seem to number more than all available in Bulgaria, run into other vehicles and careen through roadside objects. There is a genuine organic feel to how these wrecks happen, even without pumps to send cars skyward. It is a Hollywood rarity to capture this intensity naturally.

Getaway places cameras discreetly, cautious to capture wide angle views as monumental stunt work commences on set. Ideally, the scenario provides genuinely thrilling (if abysmally low grade) footage and sadly so indecisively edited as to run down enthusiasm. If 70 cameras were in place to capture a stunt, all of them are considered in glancing cuts so egregious in application, following basic flow becomes impossible.

Toward the end, Getaway offers a master shot from the fender of Ethan Hawke’s Shelby muscle car. It runs for upward of two minutes, transitioning between night and day without a cut. Cars swerve with near misses in an incredible piece of choreography. This stands as the longest shot in the film.

Sadly, cinema demands narrative. The film begrudgingly provides. Ethan Hawke’s on-screen wife is kidnapped, blackmailed by a disembodied voice over a cell phone and Hawke is forced into wrecking this city’s infrastructure. Between images of flipping motorcycles and paint scraping, awkward inserts of Hawke looking shocked or terrified jump into the fray to add human elements.

Selena Gomez rides shotgun as a misguided teen trying to recover her car which Hawke recently stole. Bad timing, and it’s worse for Getaway which now includes Gomez in those action shot inserts. Minuscule character development builds an on again, off again buddy relationship between the pair, neither side willing to kill for the cause unless one of those pesky pedestrian vehicles gets in the way.

Warner’s Getaway is sliding on scale tilted downward without opportunity for escape. Storytelling measures are pitiful, action occurs without consequence, editing is nauseating, and set up is a shameless excuse to fill junkyards with scrap. Despite its often repulsive visual space, Getaway is an attention grabber with visceral collisions and exciting chase design – repetitive only due to saturation. For car crash nuts, even the dismal editing cannot take away the power of these jarringly dangerous stunts. 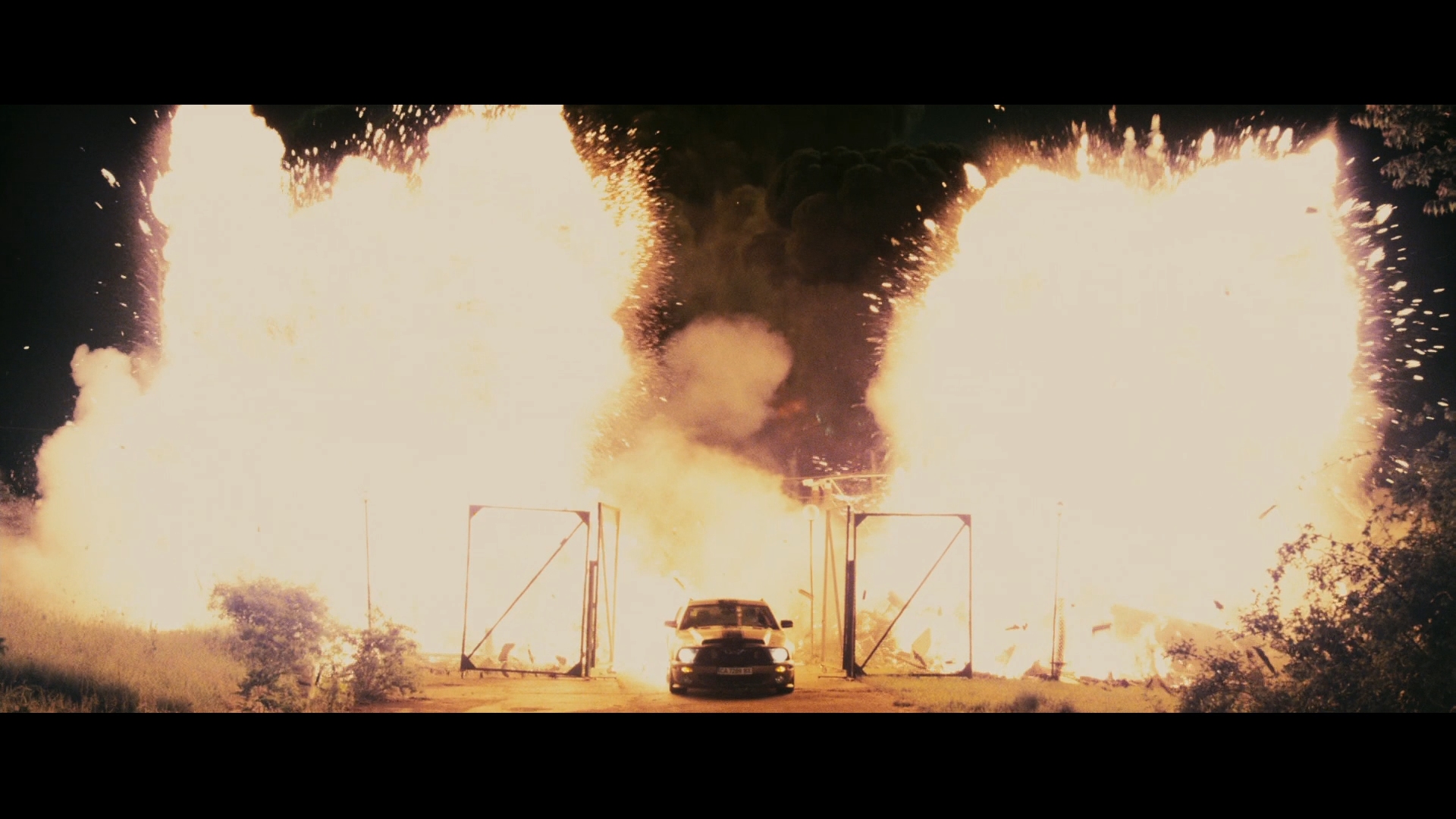 Much of Getaway is filmed from consumer grade cameras scattered across streets, cars, or other oddball angles. This is not a pretty feature, slathered in noise with additional processing added in post to clean up this saggy material.

Steady footage is captured with the Red and often looks phenomenal. These shots compose around 15% of the finished work. Fidelity is pure and sharpness is intense. Close-ups produce tremendous levels of facial definition and black levels scream with purity. Splashes of color in daylight, away from the orange and teal mess of nighttime, add appealing layers of saturation.

Warner’s encode (AVC) is fine, as if it could possibly lessen the abysmally low resolution footage. Artifacts appear to be strictly pronounced by the source and jump from banding into crummy noise between edits. Some shots are intentionally dulled to keep a blindingly bright contrast at bay. Some street reflections would be eye killing without that touch.

Getaway is a tough film for Blu-ray, rarely a showcase and limited in visual scope for the sake of uniquely structured angles. Nothing else looks like Getaway for better or worse. It becomes difficult to imagine DVD compression layered on top of this material, although it may add some grit and further the effect.

For something done via minuscule web cams, audio exploits are impressively posed. Engines are full in the LFE as they start up and hum when panning through the frame. Explosions are massive and even if they fail to reach dominating levels of subwoofer thrust, they still house some weight. Debris fields are genuinely spread wide to accentuate.

Much of the film is an action scene, elongated and stretched to infinity to rocket this DTS-HD mix into success. Paint scraping is vividly done with sparks scattering in all channels. Stereos split heavily to capture movement. Dialog and forgettable music mingle perfectly. Exciting stuff to keep the often pointless action lively.

Prepare for five whole minutes of bonus features, which still find a way to repeat material despite such a pitiful length. These featurettes are so short, it becomes difficult to discern the work applied to the chase and stunts. Most of these do focus on action, with one set aside to hype Selena Gomez. You can skip it all and just watch the finished product.