We love the internet. We click share on top 10 lists of cute cats, spread family photos to our followers, and maybe graze a CNN site infatuated with celebrity culture.

Newspapers are dying. Old media we call it. Physical print is being swept under a weight of crumbling financial resources. People no longer want stories; they want cats. The journalists who used to act as a check system to political gaffes are being dropped. There is no money to be made in a Watergate when so many flock to YouTube for citizen journalism coverage instead. Everything is free because the internet made it so.

All the President’s Men is a film about the power of words. Opening images are of a typewriter and accompanying sound effects are a mixture of familiar clacking and gunfire. Symbolism is not subtle as Carl Bernstein (Dustin Hoffman) and Bob Woodward (Robert Redford) latch onto a break-in which spirals into corruption, scandal, and American history.

Scandal is easy now. Any movement is enough to spur an uprising of fringe websites on either side as they explode with something that counters ideology. That’s normalcy to a point where a, “Thanks, Obama” meme was created to mimic the influx of short lived, high traffic flare ups. President’s Men puts lives at risk while interviews are conducted in cruddy parking garages to an almost surreal level. Woodward and Bernstein were after careers as much as they were the truth. Content was truly king.

Content rules the film itself, a rare example of taut, concise editing, using ink wells worth of information without splotching the paper. President’s Men is not content with its material – guaranteed Hollywood corruption drama for sure – and escalates the narrative with a duality of perspectives. Bernstein and Woodward are rivals in the undercurrent who whip up their divergent methods to track squandered campaign funds and name leads. It’s exhaustive at two hours; their quest was months long.

President’s Men is a time capsule. With almost certain eventuality, the film will be seen as a genuine relic. No computers are in sight and scribbled on note pads are puzzle pieces. News rooms, with details laid out to utmost authenticity, find scattered papers and ringing phones with a level of normality. It’s all a smart phone now.

Most important to the piece is to never oversell this material. Watergate became a moment which changed the country in terms of political over watch and trust. Yet, President’s Men never slips from its focus on two determined reporters pouring over documents. Something is inherently askew as the film slips onto a comatose path of dying leads. Moments of genuine suspense are uplifted by a minimalist score, enough to brush up intensity during surges of editorial suspense. Words have never been portrayed with such elegance or care on screen.

Audiences are meant to root for Bernstein and Woodward. This is, at its most basic, an underdog story. The pair fights and claws for discovered sources and leads while under an editor who slams the story on principle. It doesn’t have meat or connecting facts he says, and while Ben Bradlee (Jason Robards) veers from cigar munching stereotypes, his words are antagonistic enough to get behind a story which in retrospect we know is true.

Maybe their work is the greatest “selfie” ever, if a modern generation fails to immediately gleam the accomplishment of these newspapermen. Woodward and Bernstein did not take a months long snapshot of themselves so much as they did American politics during the period. Their selfie didn’t spread across social media and was disliked by many but went viral, infecting people up to the President himself. Then it led into this perfect digestible film, and thus history. It’s an amazing gig that can only continue with respect paid to those wiling to uncover truths, and less to those who pull choice quotes for headlines. 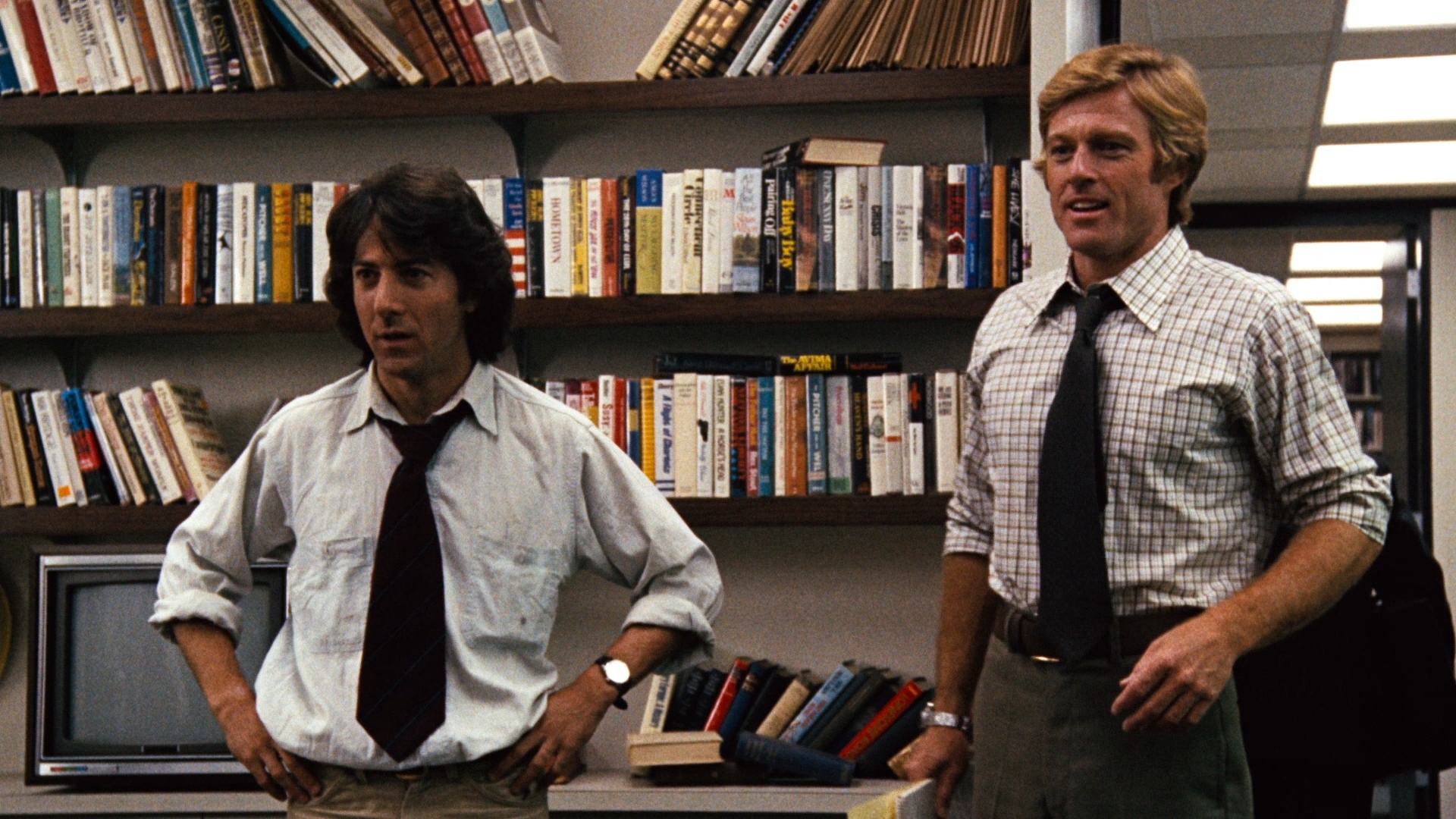 Warner distributes their journalistic classic to Blu-ray in touched up form, most notably in their color palette. This is now less a product of the ’70s and more modern design. Meeting Deep Throat inside a darkened parking garage, Redford is not surrounded by natural blues. Those hues have shifted to digitally graded teal. Look at the lights on the exterior staircase of Redford’s apartment, glazed with a definitive orange and teal cast instead of natural light. Flesh tones are warmed while other colors are bunched up with stronger effect. With an exception of fading blacks, little here in terms of contrast or color feels aged.

Other digital touch-up has been avoided, leaving relatively soft cinematography as is. Grain is thick with regards to the film stock’s presence. Warner’s capable AVC encode works to resolve these frames naturally sans egregious compression. Print damage is held at bay, peaking with flashes of dirt. No scratches are evident.

The sharpest moments are stand out even if they feel a generation or two away from the negatives, or lower in resolution than other modern scans. Fidelity is precise regardless of back-end decisions. Striped shirts, destined to flicker or show stair-stepping on prior formats, are distinctive here. Facial detail is impressive while book titles are legible on background shelves inside Bradlee’s office.

Despite some initial grievances regarding black levels, President’s Men recovers to deliver utmost care in its crucial shadowing. Deep Throat is obscured with dense, rich blacks. Nighttime streets as Redford turns to paranoia are generous and keep this image on solid footing. With exceptions made for the gross adjustment of color, this is wonderful stock brought to Blu-ray.

All the President’s Men is slipped into a stereo mix without much accomplishment outside of its fidelity – which of course is most important. Split elements between channels is non-existent. This is ultimately a sonically minimal film conquered by pure dialog or the dated snap of typewriter keys. No attempts are made to bridge those office environments into separate channels.

David Shire’s score becomes prominent when called upon, with sharp guitar strings and accentuation with horns. Fidelity is waning through time, if brought to life precisely by this DTS-HD track. It becomes loud and unnerving, losing none of its impact. Great work.

Robert Redford chimes in with his thoughts on a commentary track, featured previously on DVD. So was Behind the Story, a four-part piece jumping over the hour mark with a focus on behind-the-scenes anecdotes and non-fictional accounts of the Watergate scandal. Despite some abysmal video quality, it is an essential tag along with the film. An excerpt from an episode of Dinah with a Jason Robards interview is also offered.

All the President’s Men Revisited is given its own disc, a fresh new piece narrated by Redford which touches on new information with a mix of film/reality focus. At just shy of 90-minutes, this is reason alone to purchase the release.