Lion of the Desert is a historical epic detailing Omar Mukhtar’s valiant heroics, leader of the Bedouin rebellion against the Italian occupation of Libya before World War II. Firmly planted in the grand tradition of military epics that seemed all the rage in the 1970s, the 1981 production was directed by Moustapha Akkad as a big-budget extravaganza. Starring Anthony Quinn and Oliver Reed in a battle of wills, the movie presents a unique perspective against the fascist forces of Mussolini’s Italy. Based on actual events and historical figures, the largely unknown history to Western audiences make for a solid historical narrative.

The year is 1929 and dictator Benito Mussolini’s Italian forces are still faced with opposition in Libya from the native Bedouins. Mussolini has very little screen time but is capably played by Rod Steiger. Mussolini orders General Rodolfo Graziani (Oliver Reed) to Libya to crush the rebel opposition, led by Omar Mukhtar (Anthony Quinn) for the past twenty years. Lion of the Desert crafts a mythic, larger-than-life image for the Bedouin leader. Originally a simple teacher and a hero to his people, Mukhtar continued as a thorn in the side of his Italian occupiers with crafty guerrilla tactics and inspirational leadership until his eventual execution at their hands.

The Bedouins are the ultimate underdogs fighting against the more powerful Italian army, taking to horseback against tanks and heavy artillery. Omar Mukhtar tries to make a peaceful resolution with the Italians but Graziani uses it as a chance to delay the inevitable conflict until more of his troops can arrive. Oliver Reed really chews the scenery in his performance as the twisted Italian leader, going off into long monologues. The character is written somewhat erratically, as he vacillates from a deep admiration and respect for Mukhtar to a ruthless general bent on wiping out the native population. Graziani has a weird obsession attempting to restore the glories of Imperial Rome in Africa.

Most illuminating from Lion of the Desert is its harrowing portrayal of how the Italians treated the Bedouins, forcing them into an early form of concentration camps. The military conflicts in the desert are typical of the action seen in other movies from the era, but its better moments come from Omar Mukhtar quietly leading his people by example. Refusing to take a bribe from the Italians, Lion of the Desert paints him as a morally incorruptible force fighting for his people’s survival until the very end.

Lion of the Desert is a conventional epic with a couple of problems. The pacing gets quite tedious at nearly three hours in length. Quinn gives an understated but fine performance as Omar Mukhtar, a heroic military figure to sympathetic audiences. This is not one of Oliver Reed’s finer showings, his Graziani is all over the map and some of his speeches should have hit the cutting room floor. Moustapha Akkad’s direction is steady but the story needs some slight editing at nearly three hours. 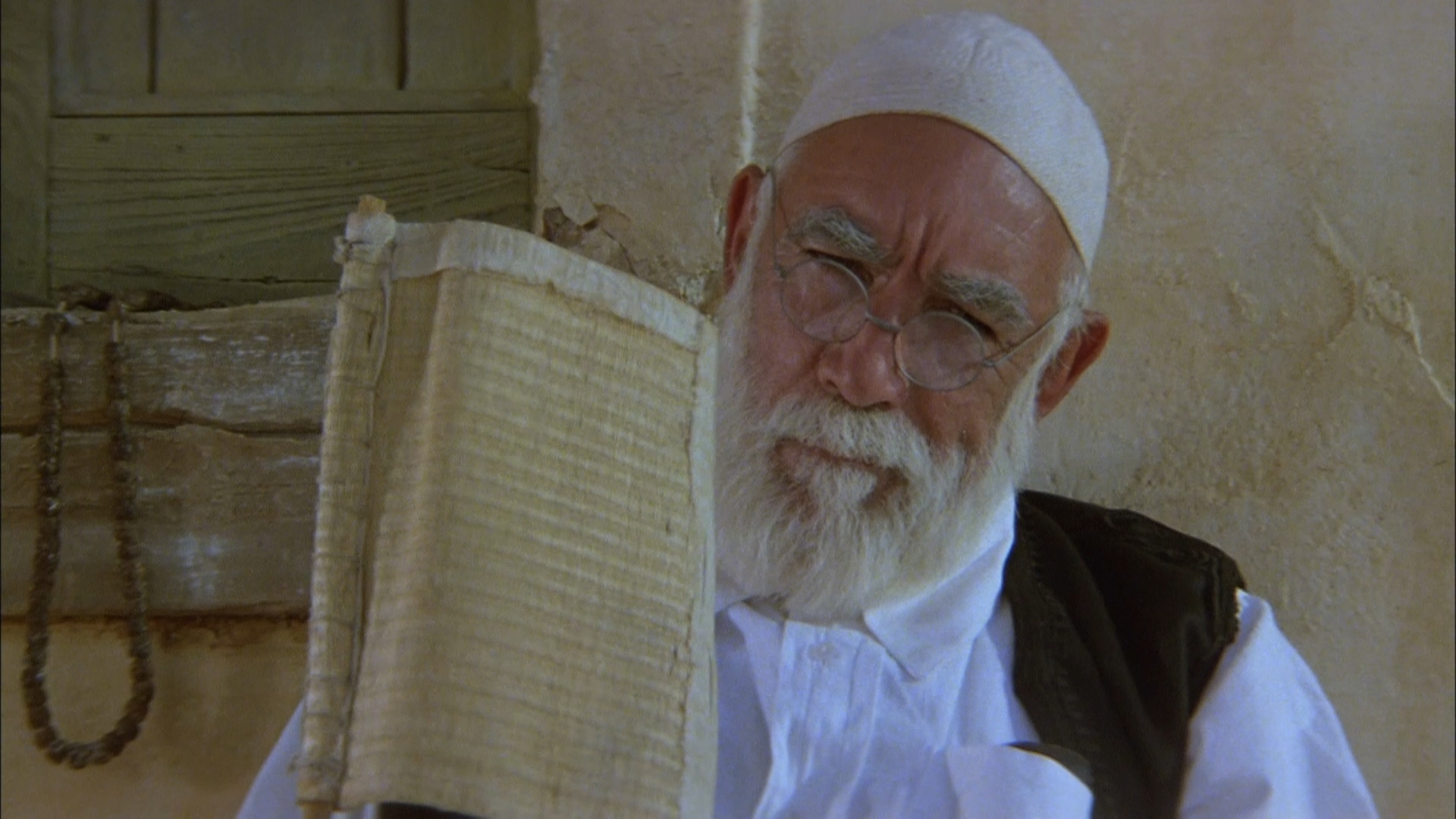 Lion of the Desert arrives on Blu-ray in a somewhat disappointing presentation for the 1981 epic. The film transfer has been struck from fading Eastmancolor film elements. It is a dated telecine transfer made at 1080i resolution, most likely first intended for broadcast distribution or syndication. It crops the beautiful scope cinematography from its proper 2.35:1 aspect ratio to a cramped 1.78:1 framing. Anchor Bay uses the same cropped transfer seen on their UK Blu-ray.

Anchor Bay has included the 173-minute cut of the film on a BD-50. The main feature is encoded in AVC at a relatively high 30 Mbps average. The thick, wavy grain structure is replicated without problem. It is a very nice compression effort for such a long film with heavy grain.

The master has been created from ragged 35mm film elements with questionable resolution at times. The opening reel with Mussolini is a mess, exhibiting serious gate weave and telecine wobble. The frame literally becomes jittery on the screen. Thankfully the problem fades away after twenty or so minutes, though one critical scene late in the movie has similar problems. Beyond that there are some minor instances of print damage. Faint white scratches pepper the earliest desert skirmishes. The print quality does get healthier as the movie goes on.

There is little direct evidence of digital processing having been applied to the transfer. In fact, the telecine was made so long ago that it’s possible filtering and sharpening were less serious concerns for transfer technicians. Some remnants of natural optical ringing is evident, though the halos only appear in a few back-lit shots. Actual detail in close-ups is fairly poor, though the lack of high-frequency content could be ascribed to the poor film elements. Contrast and black levels are acceptable, rarely hindering the overall clarity. Eastmancolor film stock’s color saturation tends to fade over time and that is somewhat noticeable in this unrestored transfer.

Lion of the Desert was a big-budget epic in its day and its cinematography should look much better than this older transfer on Blu-ray. Taken from unrestored elements that are certainly far removed from the camera negative, it resides in the twilight between true HD and upscaled DVD. The cropping truly hurts the impact of the film’s panoramic cinematography. The dull, faded print offers only minimal improvements in resolution and definition. The soft cinematography is done no favors by the dated transfer.

Composer Maurice Jarre’s lively score sounds fine in the 5.1 DTS-HD MA soundtrack. This mix lacks the impact and expansive presentation of more recent films but does its job in a serviceable manner. A sprinkling of panning effects and surround ambiance in battle are the flashiest elements in the audio mix. The symphonic score has pleasing fidelity even though its low-end extension is limited. The one area of concern might be Anthony Quinn’s dialogue, which he delivers in hushed tones much of the time that often comes across as mumbling. Lion of the Desert’s audio is slightly dated but sounds a tad better than other action-heavy movies of its particular vintage.

A secondary 2.0 PCM soundtrack has been included that sounds equal in fidelity and separation to the 5.1 mix but confined to the two channels. The packaging is incorrect, no subtitles of any kind have been provided for listeners.

This Blu-ray contains no special features. The prior DVD contained a director’s commentary from Moustapha Akkad and a 32-minute featurette, a big loss for this edition. Anchor Bay could have attempted to secure those extra features for this supposed collector’s edition.