Turbo becomes an uber snail after he is inadvertently sucked into the engine of a drag racer’s car. An injection of N20 later, Turbo gains the ability to rocket himself 226 MPH. In terms of snails, he becomes a hero.

The N20 splash continues its effects. It gives Turbo (voiced by Ryan Reynolds) brake lights. His eyes become headlights. His shell is an alarm. Most notably, he is able to receive AM/FM radio signals and project sound from the ooze of snail skin. Maybe this is the loophole which engages the CEO of Indy Racing to let this determined snail into the circuit… or maybe it’s all just pointless filler for laughs.

Turbo’s speed is crucial. That ability draws the eye of a fledgling and excited taco kart owner who uses his snail discovery as a marketable opportunity. No doubt Turbo’s speed goes against snail kind, much like a turtle who could fly. Oh, wait…

Still, it’s awfully impressive to have a living radio with brake lights. No one seems enamored with those possibilities. Turbo’s world is not a lonesome one either. He meets others who exist as comedic relief with high-tech, LED-infused shells whom seem out of the ordinary too. Dreamworks latest is merely ill-defined as to why there is limited interest in everything the lead character can do.

The search for conflict grows weary as Turbo progresses forward. At first glance, this is a worker’s world where the mollusks trudge into morning routine at a small tomato garden. Turbo is the outcast until his super powers are granted. Follow-up with the same outcast situation, only with other snails. With limited fanfare, his rival shifts again to a smarmy Indy champion. Turbo switches villains without concrete footing under the previous set.

Instead, all of the energy and enthusiasm switches to young taco stand operator Tito (Michael Pena). Responsible for much of the effort to ditch his work life, find entry money, and make the trip to Indianapolis, Tito becomes the hero of the piece. Despite tie-in merchandise adorned with with colorful shells and smiling critters, it’s the guy in the faded t-shirt who carries the real enthusiasm.

Turbo’s story is passe. It’s overcoming odds, being something you’re not and believing you can do it. Oddly, he does not gain his greatness from hard work; it comes down to an accident. He always speed and is granted such a skill. Tito, by comparison, puts in the time and fights for something he believes in. Kids cannot relate to a snail drenched in poisonous chemicals but Tito’s unwavering excitement is infectious.

Also consider Tito being the outcast. Turbo is always accepted, sans expected levels of narrative driving conflict. Tito needs to win over the owners of a rundown strip mall via grandiose promises of customers they usually never see. He needs to implore Indy’s CEO to let this little snail enter competition. Calling the film Turbo is disingenuous. Apparently, calling it Tito did not carry the same energy on marketing materials. 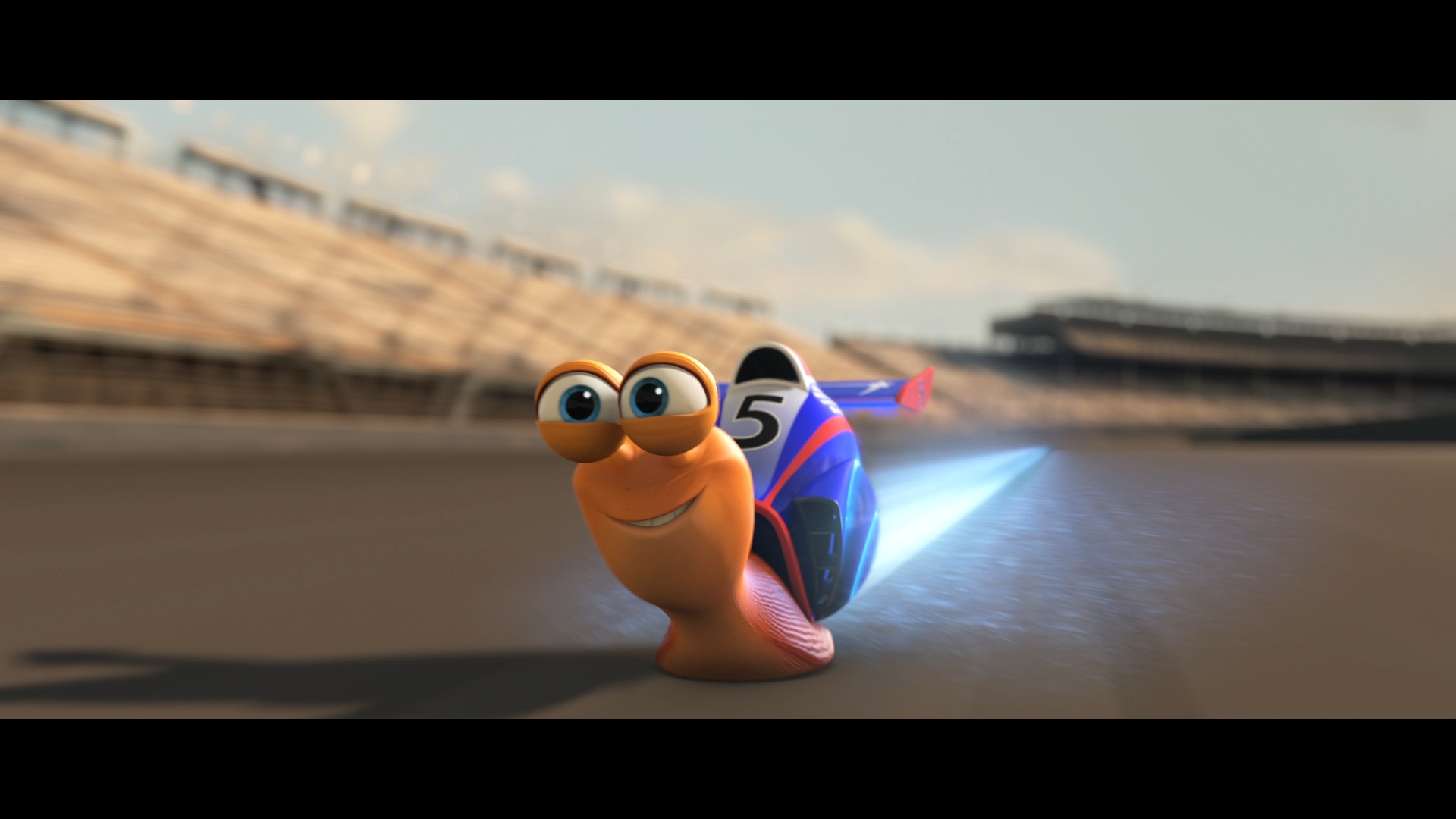 If Turbo must be placed against the rush of computer generated features, it ultimately stalls. By mere design, Dreamworks’ feature comes in as second tier. Despite some startling realism from its few Indy races, the piece is a bit flat. Characters are not adorned with fur or heavy texturing. Some glistening on porous skin is Turbo’s visual extent.

This is all designed though, and Turbo’s mundane aesthetics are still gifted with clarity of modern animation. Images are splashed with color and intense contrast. Black levels are dense (nighttime scenes prove extensive), and lifted on Turbo’s glowing trail of speed. Scenes in the tomato garden impress with calculable depth and densely colored fruit.

Turbo is rich in sharpness, sticking to heightened levels with pronounced resolution. No scenes are offered which display anything short of intense images. There are few tremendous successes here, so precision becomes the disc’s memorable quality. Blades of grass, when not being utilized for depth of field, are all defined individually. Turbo is also challenged by a splash of confetti, proving the encode is ready to carry its weight.

As with the 2D presentation, the 3D disc sprouts up moments which showcase the full extent of the tech. Shots low to the track during the final race are accomplished, and backgrounds swell deep into the tomato workspace. A spectacular flying sequence as a character is snatched by crows nears too dizzying to watch. Confetti and aggressive strewn grass clippings are mesmerizing.

And then, there is everything else. Turbo’s 3D sit there uninterested. Snails generate limited depth on their own accord and unless humans are sticking their hands toward the screen, effects are marginal. Many scenes are found languishing, looking for dimensional content. Action alone seems considerate of the stereoscopic presentation. All else is tossed to the wayside for fodder, but those action sequences are something else.

Toughening up with LFE, Turbo gushes with engines and bursts of energy to scale its major moments. On the hood of a street racer’s car, the thundering effect sounds massive and bold. Subwoofer activity is tight and fierce. By the Indy 500 finale, Turbo is flush with reasons to listen.

Further greatness slips into the surround and stereo work, enjoyably filling the full 7.1 soundstage. F1 cars jet past the listener with spectacular results. Turbo himself is active in his displays of speed and stereos are needed to keep him inside the soundstage. Crowd ambiance is superb while exaggerations of tumbling tomatoes and nearing lawnmowers pump up the front half.

Extras fall into the category of fluff, or things for the kids to dabble with. Champion’s Corner is a faux sportscast with Turbo discussing his success. Tricked Out briefly explores the shell designs given to the character, and a short deleted scene focuses on Tito. A single scene is given storyboard comparison treatment.

For the kids, they can learn to draw the various characters in detailed tutorials. Music videos and an interactive shell creator finalize things outside of the usual Dreamworks jukebox filler (and trailers).