There is an arrogance in Man of Steel’s design, an idea that something bred of perfection could be made “better.” Everything is better in America as we’re born to believe, so Warner hired writer David S. Goyer (who reignited Batman) to create an even better Superman.

Consider Superman: He has a perfect masculine jaw. He is nigh invincible. He stands for righteousness and hope. He wears the colors of the American flag.

Under those conditions, Superman (Henry Cavill) himself is an arrogant creation. The idea goes that aliens on other planets would appear in our likeness, speak our language, and fight for our principals. They would come to Earth donning America’s red and blue to fend off other invaders. Making him an embodiment of invincibility is bred of the United States’ perspective as a super power. Changing him suddenly seems less of an infringement on a cultural icon than it could be.

Making Superman fallible within the framework of a wounded country – post-recession, post-9/11, and multiple Middle Eastern wars – is a logical extension of the character’s purpose. America is fearful and paranoid. We do need someone to rescue us with a symbol of hope strapped to their chest. Superman has evolved from someone who dabbles in interplanetary squabbles and saves airliners from crashing. He is weakened because the country he represents teeters.

General Zod (Michael Shannon) is one of few remaining Kryptonians, a dying race which became a victim of subterfuge and ultimately imploded their planet. Zod wants to keep Krypton ideals alive; their civilization thrives on pre-selection in birth, creating lives devoid of free will. Superman (Henry Cavill), predictably, wants none of it. In the undercurrent, there is a perspective of the other side who see the USA as antagonistic, a country who often attempts to supersede cultures with its own.

Instead of Superman representing inherent norms, it’s Zod. We have become the antagonizers, dropping into foreign soil and injecting our systems in places where they are so often refused. Superman thus becomes a mournful, confused voice, acting as a warning siren in this latest origin story. Questionable narrative tactics follow Kal-El through an adopted childhood, guided by an impossibly gifted morality speaker in Johnathan Kent (Kevin Costner). Young Kal-El wrestles emotionally as to whether to use his powers – granted from our sun – for the sake of life or let things fall as fate would dictate.

Lois Lane (Amy Adams) humanizes Kal-El, a poky reporter with dialog to better represent humankind as opposed to someone capable of supersonic flight. Although it demands to be otherwise, Man of Steel is patently unrealistic with its laser beams, X-Ray vision, and catastrophic destruction. Warner’s reboot is stuffed with preposterous events, and it takes a character like Lane to shrink the unreality to acceptable levels. However, she cannot help the logic of minuscule Smallville, Kansas containing an IHOP, 7-11, and Sears within a one block radius. Product placement overpowers all.

Man of Steel ends with this incarnation of Superman mauling a $120 million dollar spy satellite. After the rush of computer generated people roughing up buildings for 30 minutes, the film takes a final brush at reality in poking another hole in an American failing. This Superman is not saving us so much as he saving us from ourselves. He rejects the careless decisions which continually drain our freedoms for the sake of safety.

In 1939, the world was teetering and entering the opening salvos of World War II. America needed a defender and found it with an outsider, someone whom we accepted despite his foreign origins. We are not so open to border intrusion 75 years later, nor do we carry the necessity of Superman with our ideas of a self-sustaining military. Anything can be solved with a bullet or sheer brute force.

Having a Superman to deflect some of those bullets from their intended target makes sense in our current political climate, something Man of Steel does well to represent. 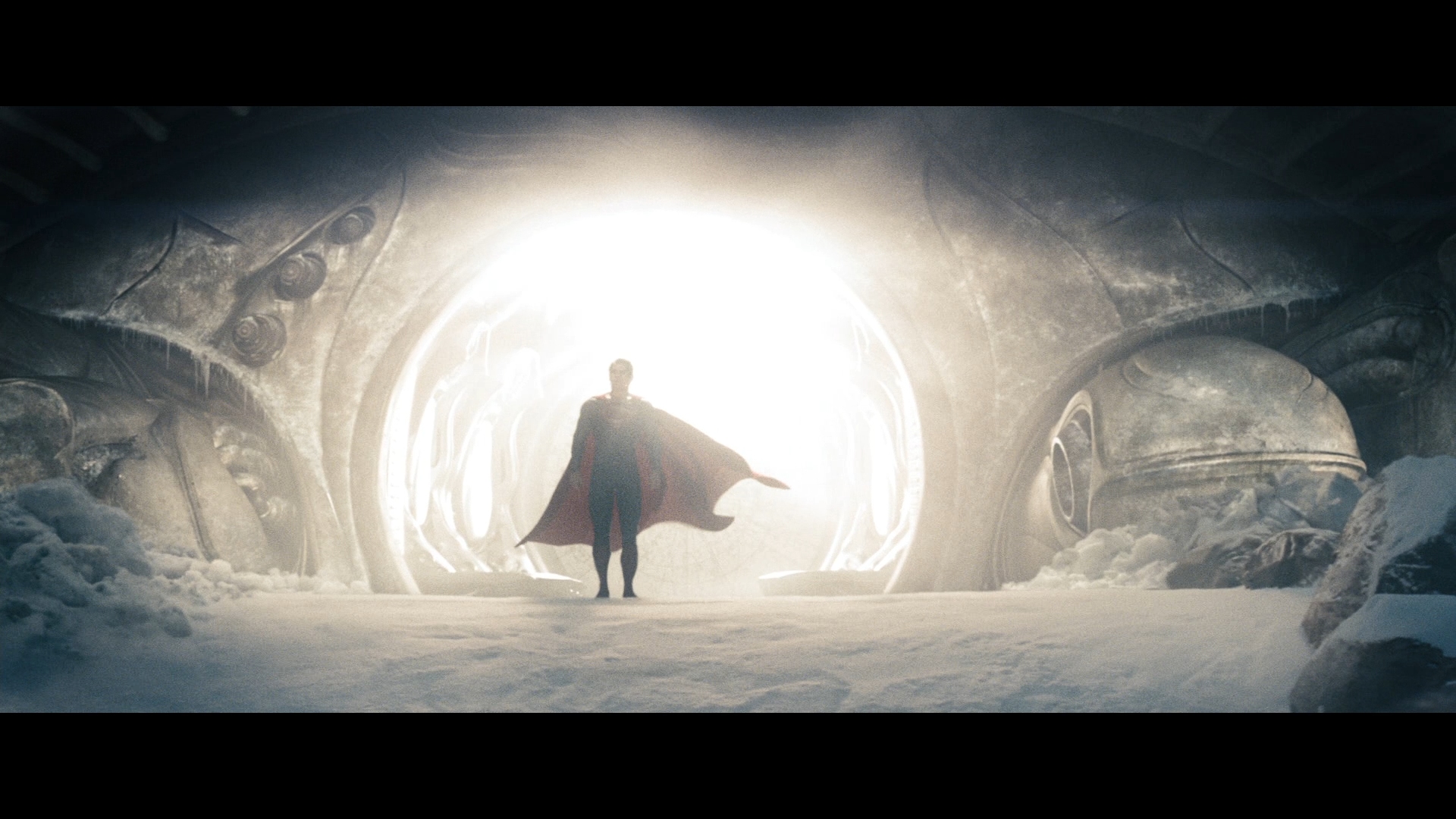 Warner’s encode for Man of Steel will pose a greater threat than General Zod. Director Zack Snyder reaches for the film canisters, ditching digital cinematography, and the resulting grain is a mess of image decomposition – but only due to the choking bitrate delivered by Warner. This AVC job sits below 20 Mbps and wobbles whenever challenged by source imagery. The lack of cleanliness is appealing were it not for stray moments where grain appears stuck or dancing with artifacts to some unheard music. Complications further arise during battles as dust, debris, and smoke scatter to further crimp fidelity.

Man of Steel poses for shocking layers of clarity. It earns a prize becoming of summer action blockbusters. Seeing Krypton in scale and appreciating their cultural minutiae is appreciated. Close-ups dwarf the frame in facial definition and Superman’s suit is a spectacle when in view. Soaking up the enormity of visual effects on display is made easier in the disc’s splendor. Shame then it’s so often wonky and smothered by inadequate encoding.

This is a dour film. At its source, Man of Steel is brushed with bleach. The idea of saturated comic book heroes has left us and introduced this ugly, murky color palette stifled by orange and teals. Not only do Krypton’s residents look like Earth humans, their planet is choked out by the same digital color grading. There is hardly a primary to be found outside of this boring, unoriginal decision which ultimately robs the piece of impact. Flesh tones weigh heavily with an ungainly orange and skylines (plus interiors) are forced to become equals in blues. Calling it cruddy would be kind.

Still, Warner does most of the damage themselves. Astonishing black levels and hearty dimensionality cannot hide the dwindling clarity. There are two discs included to spread extras around, and 12GB remains on the main feature disc. That space had the potential to alleviate Man of Steel’s deficiencies by a margin, and even better? The second disc only pushes to 32GB of total space, meaning the hour or so of bonuses on the main disc could have been ported for additional leeway. That was apparently deemed too logical.

Likewise, 3D elitists will find the disc under performing. There is a lifelessness to many of these shots despite ambient attempts to bolster dimensionality. Flaming embers and kicked up dust perform well in battle scenes, unlike debris which is supercharged and pans by the lens too quickly to appreciate. Flying scenes have moments, if short-lived ones. Even then, while third-person views of Superman make the hero push the edge of the screen, the city in front of him is flattened.

General dialog scenes are wholly unimpressive. Exaggeration of Zod’s armor is a rare highlight. Actors otherwise protrude from the background with minimal attention paid to giving them realistic volume. Cinematography is rarely stretching capabilities whether panning cities or farmland. This is a safe 3D conversion missing intangibles and trying to salvage something with limited consideration of the effect.

Saving (almost) everything from a technical perspective in this sound mix, blasting DTS-HD 7.1 goodness across its soundstage and delivering heft to the LFE. Sequences of planetary explosions, military intervention, and superhero insanity only begin to brush up the spectacle. All of this is expected and well equipped. Bullets ping from the aliens after firing with subwoofer support. Explosions are richly configured and sold with weight in addition to the rush of air. Ship engines sell their scale and buildings collapse with the best of Hollywood intentions. Imagination is provided for the audience.

Man of Steel is rich in design. For those expected qualities, many of its touches are what encapsulate the disc in aural supremacy. Superman rockets into the sky with bursts of tremendous LFE. Man of Steel’s climactic rumble in Metropolis features punches with the utmost otherworldly authority, and send hero and villain alike into (or through) structures. Instead of dull choreography, audio accentuates the power to better sell the visual scope. It’s wonderful to listen to.

Two discs often means a dearth of content and Man of Steel does not let itself out with a whimper. Disc one holds a 25-minute featurette on the legacy of Superman and how best to adapt it for the modern age. All Out Action delivers the goods on Henry Cavill’s exhaustive training regimen and the work put into the special effects laden action. Krypton Decoded is lighter in nature as one of the younger actors to play Superman chats about visual effects. An animated short celebrates the 75th anniversary of the character with careful consideration of all Superman renditions in this fan service short. The final bit is a promo for The Hobbit, which is quite the comedown from the excellence of the short.

Disc two seems smaller but is certainly broader in scope. Planet Krypton is a faux featurette which could air on History Channel about our reality following the events in the film. Journey of Discovery is the entire Man of Steel film (again) with DTS-HD 5.1 and video intersections with cast, crew, and more as they pop-up during the feature. It stretches the film to a running time barely shy of three hours, so this is substantial content. Sadly, you need to view the entire film; the content is inaccessible otherwise.