It’s a lazy, slow summer for Way Way Back. Duncan (Liam James) sulks through the summer home and beaches of a family getaway, too vulnerable for social interactions. His incompatible step father demeans him, his mom is obsessed with her new fling, and his step sister is one of the popular girls.

Duncan is shelled up with an invisible protective barrier and scornful, indifferent face. Teenage angst is running high as Way Way Back institutes Duncan’s plan for coming of age. His outlet is a water park headed by the leisurely Owen (Sam Rockwell) who sees an opportunity to “rescue” this kid from misery.

Duncan leads the charge, a performance dripping with uncomfortable awkwardness and silence. It is possible to feel the agonizing internal monologue as he becomes scrunched by an outspoken, lonely neighbor upon arrival after failing to stay hidden in the shadow of the family station wagon.

Much of Way Way Back is spent in this droopy, scornful mode. Duncan only comes alive in the latter half after being dragged from his comfort zone in the midst of water splashing amusement. Set up builds step father Trent (Steve Carrell) and mother Pam (Toni Collette) as impossibly oblivious to Duncan’s angst while they drown in margaritas. These veer from characters and become alcohol disposal units. As one character puts it, “This is like spring break for adults.”

Way Way Back forces its own hand, begrudgingly moving forward after spending an hour soaking in surrounding drama. Duncan’s relief comes from another suffering teen, Susanna (AnnaSophia Robb), although Duncan’s approach lacks sophistication. That becomes Owen’s work, to pull this kid away from social ineptness and into self-confidence.

Sam Rockwell is on fire here, the spotlight of enthusiasm in a movie often concerned with drawing out drama. Instances of spousal cheating and family in-fighting suck the limited life Way Way Back begins to generate, and Rockwell sparks the film back into living. Owen becomes the counter character and impromptu guardian as Duncan’s family does… stuff. Whatever they spend days doing as Duncan slips into water park employment is a mystery. It is entirely possible they’re playing the game, “Avoid Duncan” considering their uncanny ability to miss him as he leaves in the morning.

Plastered with marketing references to Little Miss Sunshine and Juno, the film is clearly aching to recapture the unusual dramatic/comedic magic of those indie hits. It proves quirky and quiet like its teenage lead as it spirals up a tornado of sympathy for his scenario. His support systems are broken as he heads into the wild of social interaction alone, only to find oddballs who can properly seize and deflect his frustrations. We’re nearing formula for these stories which find a personality molding through family upheaval.

What makes this one different? Not much, but spending time here could do anyone some good, especially Duncan. 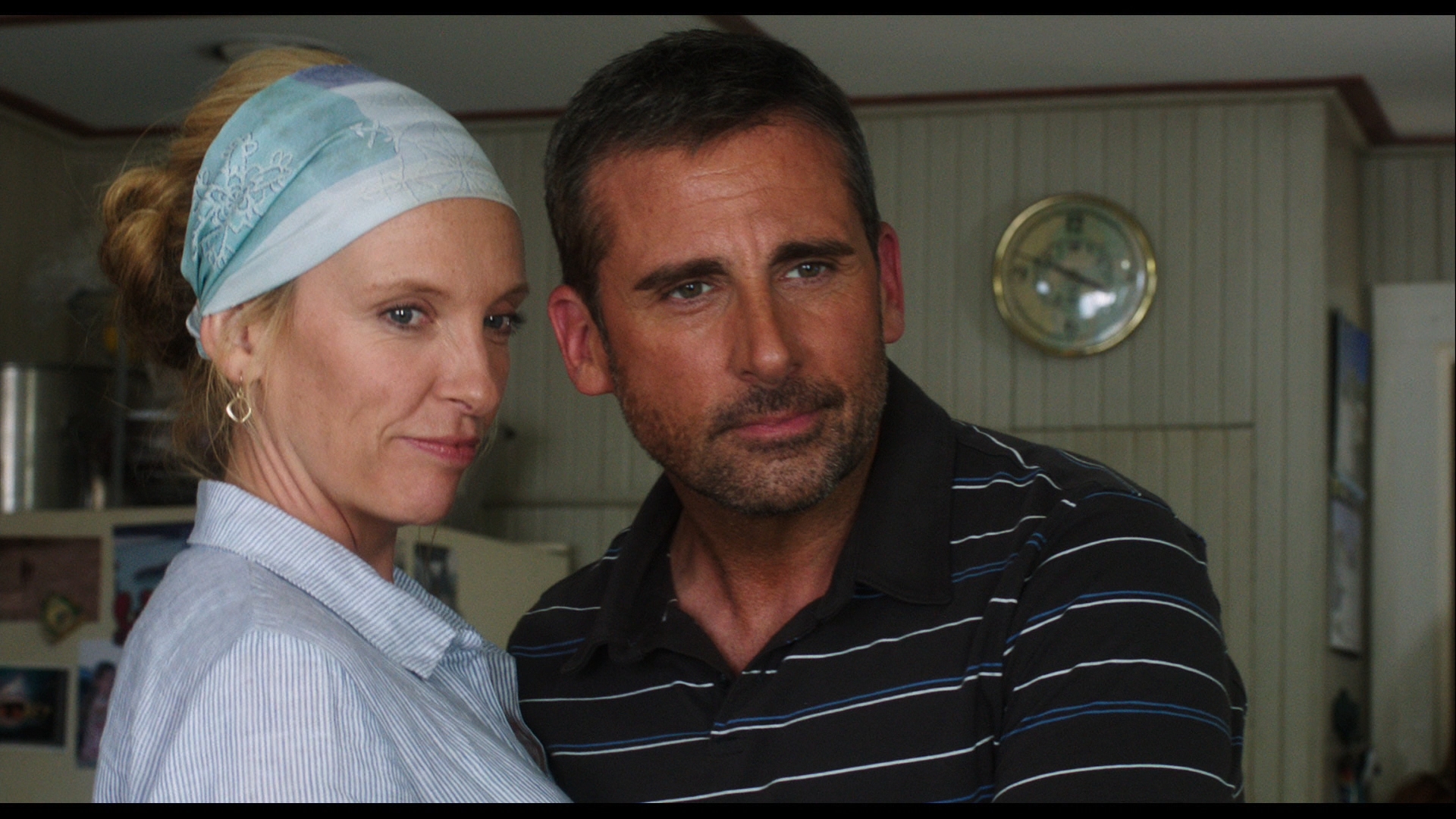 Way Way Back’s mild haze of noise is almost enough to convince someone this was captured on film. Opening shots contain what appears to be grain until closer inspection reveals a tendency for inconsistency and intrusion. Some interior photography can be eaten up by a buzz of digital artifacts, if of minimal detriment. The disc sits on top of texture mountain.

There are other instances of flubs including heavy aliasing on arrival to the beach house. Chrome on the station wagon breaks up and shimmers as the camera pans around, but this isolated incident should cause little worry. For a smaller budgeted production, the Arri Alexa dumps definition into every frame giving it a gloss and visual class. Facial detail sprouts from medium or close shots while carrying into background elements. Beach scenery is stunning down to sand grains and patches of weeds or grass are a marvel.

Perched on contrast and assisted by dense black levels, Way Way Back is often a stunner. Sunlight is beaming onto the frame, rich and inviting to further refinement. Exterior night shots blossom blacks with plentiful shadow detail. Low light or otherwise, there is a strict adherence to sharpness throughout with only a handful of softer focal instances.

Final element? Color. Lots of color. Without becoming too fierce with orange flesh tones (even in these tan-heavy environments), summer is alive and well with darling primaries and natural saturation. Water park toys come in various shapes and colors to spruce up the material. Greens are rich via plant life and beaches have their natural beauty intact. We have a winner on Blu-ray.

Little more than appropriate ambiance will carry the DTS-HD track to conclusion. Beaches offer water rushing to the shore in a variety of channels dependent on camera location. Water park scenes rush ahead with screaming kids and a few shots inside water tunnels reveal a pleasant echo. A fireworks display does not hit the subwoofer like most as they explode with light impact.

Dialog stays in the volume scope without fluctuations to balance everything out. Even during parties or within a realm of loud music, lines are audible. It’s ultimately indifferent audio, but keeps a sense of space consistently.

A six-part behind-the-scenes featurette runs half an hour, effective in detailing where the story originated including real life childhood experiences from the writers. Three deleted scenes are followed by three promotional featurettes worth skipping before this Fox disc calls it quits.